I've gotten behind on reporting board game plays. Julie and I played My Happy Farm with our friends Chris and Nora last Monday. This is a pretty fun little game where you plant seeds, then wait for the seeds to grow into vegetables, and then use those vegetables to feed your farm animals. That's how you make points to win the game. It's mostly played with cards and it's a pretty neat little game. I like it a lot. 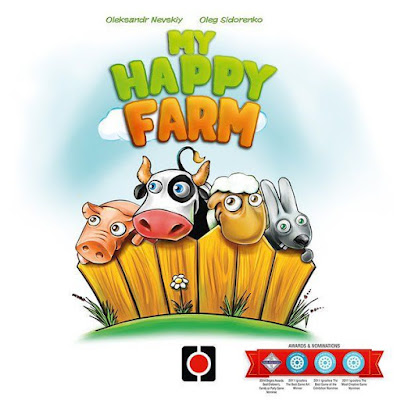 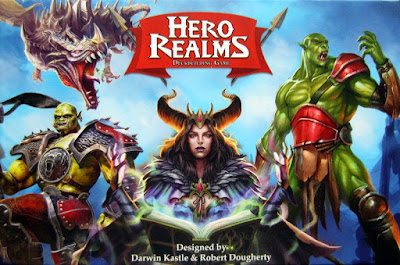 Julie and I played Black Sonata! This is really a solo game, but many reviewers had said that they enjoyed playing it with their spouse and working together to solve the game's riddle. I agree with that assessment. Because the bulk of the game play is deduction and hidden movement, discussing possible solutions to the puzzle is really engaging for two. 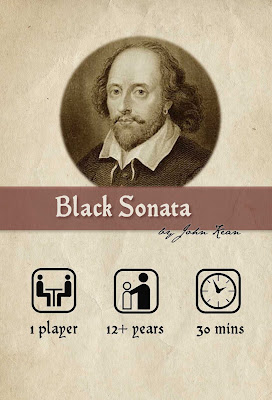 The theme of Black Sonata is that we are searching for the Dark Lady mentioned in a number Shakespeare's Sonnets. The theme and aesthetic of the game are fantastic as is the game play. The fact that someone designed a brilliantly working solo hidden movement game is phenomenal. Julie marveled at the feat, calling the game's designer a genius.
Black Sonata is game number 38 in the Board Game 100 Challenge! Only 62 games left to play!!

Posted by Jeff Moore at 7:04 AM No comments:

Saturday was just about a perfect day. I got up and went to Hudson Hawke for a haircut and beard trim, which includes a shampoo, a hot towel on my face (glorious) to condition my beard, and a shoulder massage with this machine that's like a power-sander for your muscles! It was awesome!!
Now, looking all spiffy, I got to go out to breakfast at Ziggy's Cafe on Glenstone with my wonderful family for the most excellent Mexican omelet in the world! All of Ziggy's "International Omelets" are really delicious! I highly recommend them!!
After an exquisite breakfast, it was back home, where my lovely wife Julie Moore and I played Ticket to Ride, New York! (It was her idea!!! Is she the perfect wife, or what‽) 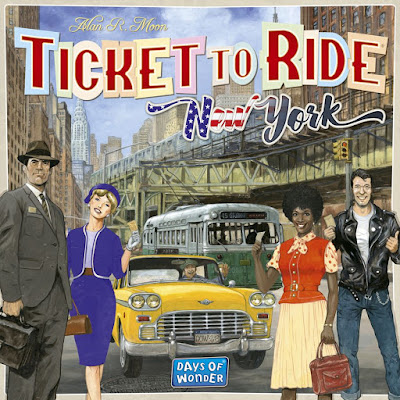 Ticket to Ride, New York is a condensed version of the popular train route building board game: Ticket to Ride! The board in this smaller / shorter game is representative of New York City, and instead of placing train routes, you are placing Taxi Cabs! Its small size makes it faster to set-up and to play, so it's a perfect game for two!! I actually think that I like it better than the original!!
Julie and I played two quick games. I won the first, but Julie completely demolished me on the second game. (So fun!!)
Still elated from my board game high, I check the mail to discover a delivery of Batman comics that I recently ordered from eBay to fill out my comic book collection. I also got some die-cast metal Batman miniatures that I am going to use to bling out my Batman the Animated Series Board Game!! (Already revealed in a previous post.)
Now it was time to take Kaylee to her interscholastic choir competition. We got to watch our daughter sing with other 8th graders. Everyone was good and the experience was kind of awesome! After that it was home again, and time to get together with David Crockett my friend of the past 30 years to play some D&D.
David and I first met in Tulsa, OK at World of Comics to play role-playing games, and for the most part, we've never stopped! David still lives in the Tulsa area, and I live in Springfield, MO now, but that doesn't stop us from getting together every other weekend to play Dungeons and Dragons with my brother Chris and another friend Burl over Google Hangouts! (Technology is an amazing thing!!)
My wonderful wife made me Manwiches to eat while I played and a snack tray full of healthy snacks, including some homemade gluten free almond flour and sesame crackers that are just fantastic!! While playing D&D we had an epic battle with a "big-bad" that had us all on the edges of our seats!! It was spectacular!!!
Yesterday was for all intents and purposes, a perfect Jeff Moore day!! Ticket to Ride, New York is game 37 in the Board Game 100 Challenge. Only 63 games left to go!!!
Originally shared on Facebook on 3-3-2019.

Posted by Jeff Moore at 7:02 AM No comments:

Julie and I just played the "Batman: The Animated Series - Gotham City Under Siege" cooperative board game. Julie liked the game okay. She said it was fun. My reactions were slightly more ... intense. 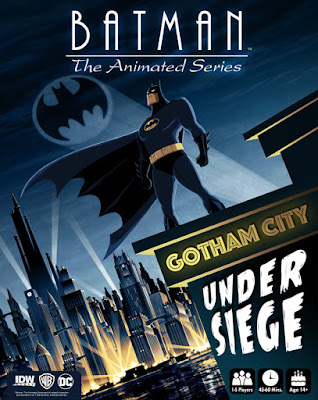 I'm a comic book fan/collector/reader/old curmudgeon. I love my comic books. Sadly, there aren't many (or any) good comic book themed board games out there.

By far the most popular game in this genre is the Marvel Legendary Deck Building Card Game. This game has many fans and has been the shining beacon of hope for comic book fans who are also board game fans.

I don't like Marvel Legendary. I don't feel like I'm portraying the role of Spider-Man or the Hulk when I play. The art on the cards is pretty, but for me, I remain detached from the theme. Marvel Legendary doesn't work for me. A lot of people feel differently.

Any board game is going to struggle with these kinds of issues, but there are differing degrees with which the game play interferes with or enhances the thematic experience.

Batman Animated's mechanisms are very simple. This is a "light" game. It has a 4 act structure that takes you through several "challenges" that are based on episodes from the classic first season of the animated series. All you do is place dice on cards to meet these challenges. It's simple.

Also there are enemies attacking Gotham City. Your hero miniature moves around the city and uses dice to eliminate these threats before they damage the city too much. Little card board boxes that look like little buildings make up the city skyline. When destroyed they are removed and a card that served as their foundation is flipped over. The card could have been flipped over (or not) even if that little box had never been there. Julie pointed out after we played that the little boxes did nothing.

They did nothing, but when I looked at those little boxes on the table and moved my little Batman around this little three dimensional city of boxes to defend it against an ever growing threat of super villains and their henchmen, something clicked for me. Something good.

The super simplistic mechanisms may lack tactical depth, but they also left my mind free to imagine the fantastic adventures of Batman and the Gotham City PD as we fought back the Joker and Ra's al Ghul. The game play is simple, and that's to it's benefit. It's clean. It's streamlined, and it works.

I LOVE this game!! Batman: The Animated Series - Gotham City Under Siege made me FEEL like a superhero!! It touched the little boy inside and pushed all his buttons. As Batman, I was doing Batman things, not gathering a set of Batman themed trading cards. The pointless assortment of cardboard boxes that formed Gotham City gave Batman's world depth, substance. It became more real. And, I for a few wonderful hours became lost in it.

Village is a type of game called a worker placement game. You have little wooden people (meeples) who represent the folks in your Village. These are your "workers." In a "worker placement" game you put (or "place") your workers out on the game board in order to perform specific game actions on your turn during the game.

The trick is there are usually only so many spots on the board where you are allowed to place your worker and you are vying for these spots with the other players. This creates tension because if the spot that you want to use this turn has already been taken by someone else, you will need to make a new plan and perform a different action. 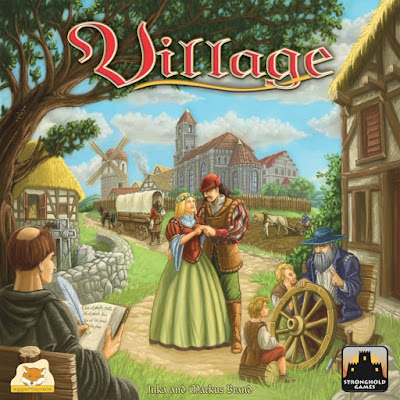 Village is unique in that your workers (being representatives of people living and working in this village over the course of generations) will actually grow old and die! Well it turns out the aging/dying mechanism for your meeples is very engaging!

Julie and I both really enjoyed this game! We continued talking about strategy and game play long after our game was through and look forward to playing this again soon. Right now I am rating this one a 9 out of 10, but with future plays that could go higher.

Julie and I played Kingsburg. This is a game that's been sitting on my shelf unplayed for some time. I am so glad that we finally got it to the table. It's an awesome dice placement game. So much fun! 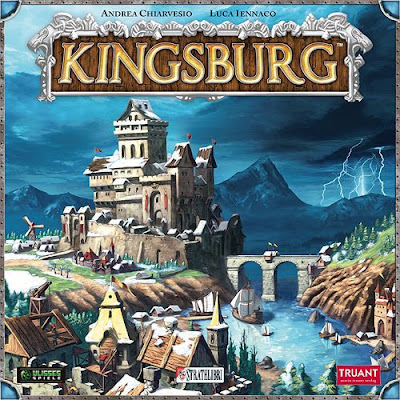 Julie and I played Trainmaker. It's a fun little dice game, but very random. It's also very accessible to "non-gamers" and it was a favorite of my Aunt Darla's ('cuz grandpa worked on the railroad.) I even wrote a little review of the game a few years ago. 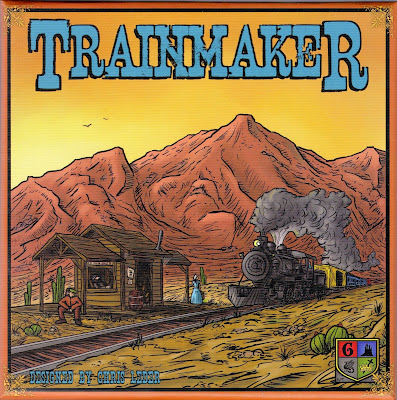 I am building my "dream collection" from my childhood. I have selected 2000 comic books from DC and Marvel from around 1975 to around 1985.
Number of Comics in Collection 1088.
Percentage Complete 54%.