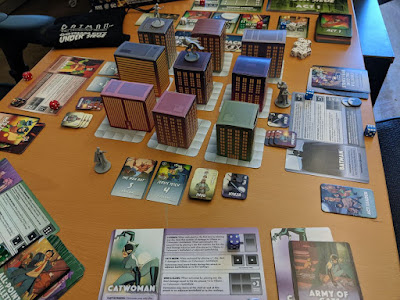 90 – Batman: The Animated Series – Gotham City Under Siege
Players take the roles of: Batman, Robin, Batgirl, Commissioner Gordon (and the Gotham City PD), and/or Catwoman and all work together to protect Gotham City from destruction. Gotham City Under Siege is a cooperative dice game. Players roll dice and then assign dice from their pool to activate unique player abilities and complete game objectives. A number of objectives must be completed in order to save the city and win the game, but more enemies attack the city every turn and if left unchecked can destroy Gotham City’s beautiful skyscrapers (The game has skyscrapers!) and cause the citizens of Gotham to lose hope. If this happens the players lose. The game is played over 4 acts, and each act has its own deck of story cards. This helps with the overall sense of escalation and gives the game a nice coherent arc. 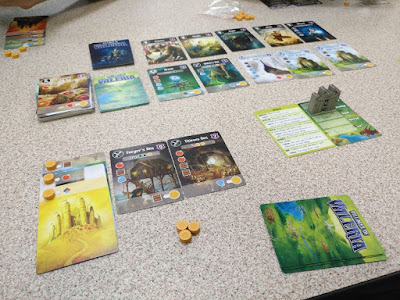 89 – Villages of Valeria
This is a small card game about building a village in a fantasy kingdom. Different buildings (cards) provide resources, special powers, and victory points. Players take actions and harvest resources to create buildings to win the game. When the lead player chooses an action, all other players also take the action (but as lead player your action includes a slight benefit that makes it a little better.) You must pay gold to harvest resources. If you harvest from your own village, you will get the money back at the end of your turn, but you can also harvest resources from an opponent’s village. If you do that, the gold doesn’t come back to you, it goes to your opponent. I really love these mechanics and the tight, shared in game economy. Villages of Valeria is a solid engine building, resource management game with some really interesting mechanics. 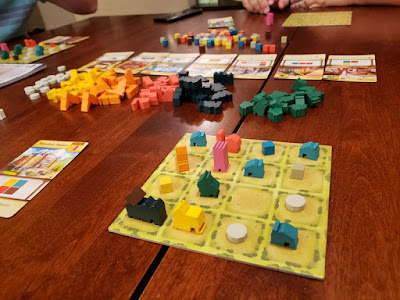 88 – Tiny Towns
This is another fantasy themed village building game. In Tiny Towns you build your town by recreating patterns on your player board. This one is an interesting spacial puzzle because as you complete buildings and add them to your player board the space that you have remaining on your board to create the patterns needed to build further buildings begins to shrink. This one is a bit like, Tetris meets Sim City. It’s a great light town building game. The rules are super easy to understand, but the execution of the rules is trickier than it appears and that makes for a great and challenging game. 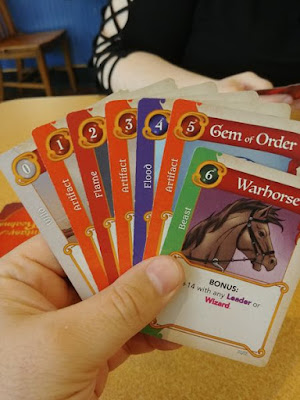 87 – Fantasy Realms
Fantasy Realms is a card game where the entire focus of the game is drafting cards into your hand to end the game with the best final hand of cards. This is challenging because the cards combo with each other in various ways. Some cards completely negate or invalidate other cards. Some cards multiply the value of another card. Getting the right combinations into your hand is key, and there are many, many combinations. This one is a fast and easy little game, that’s also deceptively tricky. It’s a good all around casual brain burner and is probably one of my most played games because hands of Fantasy Realms can be played very quickly. 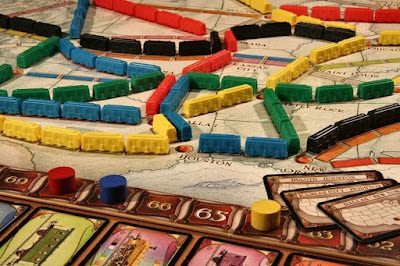 86 – Ticket To Ride
Ticket To Ride’s board is a large map of the United States – there are also game boards of Europe, Germany, Japan and many others available. On the board are differently colored routes connecting key cites across the region. Players have hands of cards and can play colored sets of cards from their hand to claim routes of a matching color on the board. When you claim a route you place little plastic train cars of your player color over that route on the board. All players will have secret objecting cards requiring them to connect specific locations on the board for points, but routes are limited and its possible that one player may block another players path. So, it’s important to act quickly. Ticket To Ride is one of the most popular family board games available. It’s easy to learn and entertaining to play.