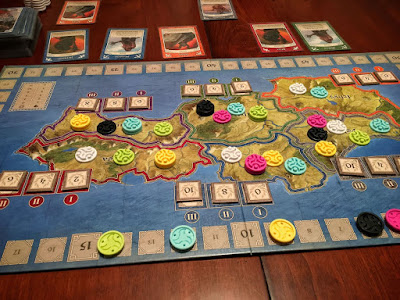 1 – Ethnos
In Ethnos, players take the roles of future kings and queens vying for control of the various regions that comprise the war torn lands of Ethnos. The theme in Ethnos may seem very “war-gamey,” but Ethnos isn’t like that. Sure, you place troops into areas on the board hoping to establish a strategic advantage, but the game is nothing like, Risk. It’s more like, Ticket To Ride.
Ethnos is an area control game, but at its core is set-collection card play. Players begin play with one card in hand. On the table are a number of face up cards and a draw pile. On your turn you can either take one of the face up cards or take the top card from the draw pile. Your goal is to create a set from the cards in your hand. Cards have two features: a race, and a nation.
Nations match those on the board. Each Nation has a distinctly colored boarder and a suitably obtuse fantasy name to define it. The colors of the cards match the nations (the name is there too for the colorly impaired.) There are 6 different nations and 6 different matching suits in the appropriate colors on the cards. There are 12 different races, but you only play with 6 each game, chosen randomly. (This creates a lot of variability and replayability.)
A set is any selection of cards that feature either all the same nation, or all the same race. Creating a set is that simple. Playing your collected set, is where things start to get really interesting. First, you need to choose one card to represent the “leader” of your war band, and place that card on top. (The sets that you play represent war bands.) When you choose your leader, you need to take into account the leader’s race and nation.
Ultimately, you want to place armies in nations on the board. You can only place your armies in the nation that matches the nation of your leader card. So, this is one thing you must consider. Secondly, every race has a unique racial ability. The racial ability on your leader card will trigger when you play your set. So, this is also important.
Finally, once you play a set, all the other cards in your hand that are not part of that war band are immediately discarded down onto the table face up so that other players can draw them. Yeah, you heard that right. In many set collection style card games there is a tendency among players to hoard cards while they try to construct the perfect combination before finally making their move. Here, you have to balance that tendency with the knowledge that anything that you don’t use, you will lose, and what’s worse, your opponents will benefit from the wealth of partial sets that you started but weren’t able to finish.
This little twist on the “set collection” card mechanic sets Ethnos apart from its peers. It’s kind of “push your luck” but not really. You have to ask yourself, “How far am I willing to go?” How much is it helping you to draw one more card, versus how much is it potentially helping your opponents? One final aspect of this is that there is a hand limit. If you have reached 10 cards in your hand, you have to play a set.
The game is played over three eras. At the end of each era, scores are tallied based on who was the strongest military presence in each nation on the board, as well as additional points for playing larger sets of cards. Eras (rounds) can end unexpectedly, but you do get a warning. At the bottom half of the deck, three dragon cards are shuffled in. When the third dragon card comes out, the Era (round) is over. The dragon cards add an interesting bit of tension as players try to accomplish everything that they can before the round is scored. 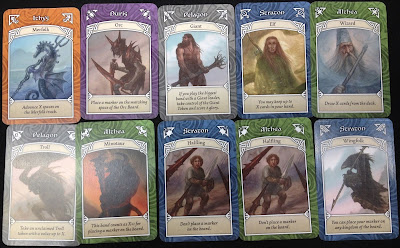 All of these elements come together to create a very engaging and enjoyable game play experience, and I haven’t even touched on the powers of the different races yet. The races all provide important changes or exceptions to rules, and the variable combinations of these ensures that every game of Ethnos feels different.
Centaurs allow you to immediately play a second war band before discarding all of your cards.
Dwarves allow you to count your band as if it is one card larger during end of round scoring. (At the end of each round, large bands are worth substantial points.)
Giants give you bonus points if you have the largest band with a giant for its leader.
Merfolk add an extra board, their own little undersea kingdom, that you advance on every time you play a band with a Merfolk leader, adding an additional way to gain victory points.
Minotaurs allow you to place armies on the nations on the board with smaller sets of cards. (Normally in order to place your army on the board, you must play a set with a number of cards greater than the number of your armies that are already there. So, if you have 3 armies in a nation, you must play a 4 card band in order to place another army there. Minotaurs reduce this requirement by one.)
Unlike other races, Skeletons can never be the leader of a band, but you can add them to any band regardless of their color or race.
These are only some examples. There are 12 races total, but you only play with 6 at a time. The information about each race is printed on their cards. So, it’s not a problem learning what each one does. The combined special powers of each race creates variability of play and layers upon layers of options. This makes Ethnos a truly engaging game play experience. 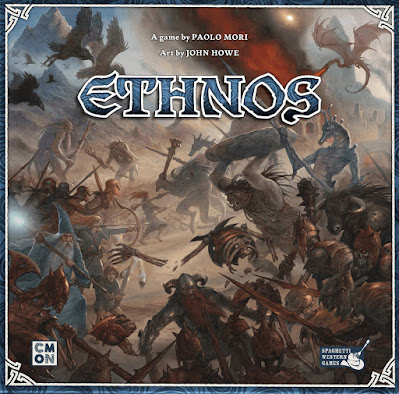 It’s fun. It’s fast. Its core mechanisms are simple yet engaging. It plays differently every time. Ethnos is just marvelous. It is my favorite board game.
Posted by Jeff Moore at 8:27 AM