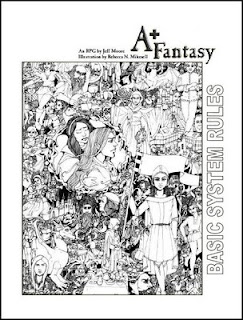 This was my first RPG submitted to 1km1kt. It was only the second game I had ever provided for online review... (The first was a game called Xerospace. This was around 1997 and I have since lost all copies of that game. If anyone has a copy of the Xerospace PDF file laying around on a disused harddrive I would be eternally grateful to recieve a copy.) Anyway, looking back on A+ Fantasy ... this game's not half bad.
It uses a simple d6 mechanic where the goal is to roll a d6 apply a modifier and (hopefully) get a six. This is made a little more interesting because instead of rolling just 1d6 you roll 2 ... and you apply any modifiers equally between the two dice. Each six counts as a success and while most tasks can be achieved through a single success some more difficult tasks (and many special abilities) will require success on both dice (called a critical success.)
The game has a combat and spell system all focused on weapon types that integrate nicely and the spell system doesn't feel tacked on. In reading this now I find myself wondering ... "Why aren't I playing this?" Initial character creation is a bit limiting, but the purchasing of skills and weapons techniques opens everything up nicely. Still there is a clear problem with the attributes and character advancement.

In reviewing it now, A+'s greatest weakness is its gimmicky letter grade system (which is where it got its name) and in the limiting nature of the four basic attributes of Agility, Brawn, Cognition, and Determination. In looking at this now, I can see a way to improve this game exponentially simply by pulling those gimmicky aspects out (I'll have to change the name ... LOL) and just letting the system stand on its skills set and Weapons techniques alone.

Maybe it's time I took a close look at A+ Fantasy (or whatever I might eventually call it.) So far I have maintained a strong trend of writing a game and then upon giving birth, simply leaving the game alone to gather dust. A+ deserves another look, and a thoughtful rewrite. Maybe it's time to start a new trend.