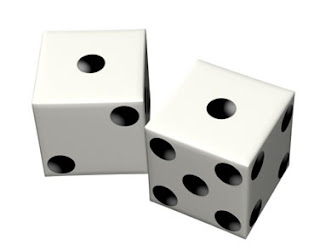 In looking back at my designs, I realize one common theme ... "The Many Uses of the D6." You see, the thing is ... when I was first introduced to this hobby, I was a high-school kid in a tiny backwater town ... and I was poor. Maybe that's why I like making (and playing) free RPG's now.

The game was AD&D ... Advanced Dungeons and Dragons (then the first and only edition) but I didn't have books, and I didn't have dice, both of which the true AD&D enthusiast collected in abundance. I quickly compensated for the lack of books by transcribing the game rules in my school notebook (and making my own modifications of course.) But, the absence of dice was more difficult to circumvent and made me an AD&D heretic, shunned by my peers. (I even tried to make a set of dice as a project in wood shop... the d4 came out okay... but the rest... well, never mind.)

This was before the days of internet and convenient online shopping. The nearest gaming store was almost 100 miles away ... I was doomed. I did however, manage to gather every D6 in the house and then some. Before long I had a gym sock (my first dice bag) full of 6 sided dice ... and I was good to go.

I sat down and figured out the best way to make a throw of a few d6's emulate a d20 ... I created charts that changed the way the dice were read to eliminate or at least minimize the bell curve. I made the d6 my bitch... she would do anything for me. And so, I suppose began my obsession with the six-sided dice. And this obsession holds to this day ... all my games use a d6. Because I don't want anyone else to struggle with the dicevation (like "starvation" ... only with dice - uh, that doesn't make sense ... people who are starving aren't suffering from an absence of "stars" ... oh, well ... ) Where was I? Oh, yes ... I don't want anyone to struggle with the dicevation that I had to. I want my games to be as accessible as they can be.

However, my obsession with manipulation of the d6 has also limited my design options quite a bit. To circumvent these limitations without loosing accessibility, I have experimented with playing cards, and briefly even entertained creating a task resolution mechanic around a game of "Rock, Paper, Scissors." Ultimately, though ... I am obsessed with the D6 and will continue to design in it's shadow.