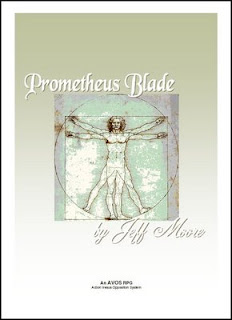 There's this great "contest" / exercise in self discipline called the "24 Hour RPG." The basic idea is to create an RPG containing all the vital elements (see Rob Lang's free guide to Organizing your RPG for a excellent example of just what those elements are and how to pull them together) complete and ready to play in just 24 hours.

The thing about this is that such a challenge is a great way to force yourself to get your ideas "out there." It doesn't matter if you manage to complete the challenge or if the material you end up with is sketchy or incomplete. The trick is to try your best and produce the best product you can with a very small investment in time. The end result might surprise you. I have attempted the 24 hour RPG a few times and each of those attempts ultimately resulted in the production of a new RPG project. A project that was born because the 24 hour brainstorm allowed me to realize that I could make that game project a reality. It gave it life. The 24 hour RPG is a great way to boost your creativity and evolve your current RPG project beyond staring at a blank sheet of white computer screen.

My first 24 hour RPG was "Sky Ace" ... an attempt to create an RPG that combined cards and miniatures to form a sort of board game resolution mechanic. In playtest later it didn't work very well. But, there were some very good ideas hidden in there ... and they allowed new game concepts to evolve. I eventually wrote an updated version and later a game called Royal Battles that I think has a lot of interesting ideas about making a board game from standard playing cards. More 24 hour RPG's followed, I wrote EZ Supers and that lead to Hi/Lo Heroes; then Duel Blade, which lead to Prometheus Blade, which lead to Powers-Brawl. All games born of the 24 Hour RPG, because a spark was started that created the impetus to build and grow an idea.