Final Fantasy IV - The After Years 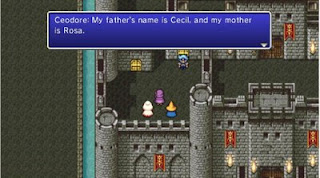 The first console RPG that had a real impact on me was "Final Fantasy II" (as it was numbered here in the USA ... actually, Final Fantasy IV was it's proper title.) This tale of a fallen Knight turned Paladin struck a cord with me. It was the greatest thing I had ever seen. There is no denying that Japanese Console RPGs have influenced the way I think about gaming.

Last night I downloaded, "Final Fantasy IV - The After Years" a new WiiWare title released as part of the Nintendo Wii's game download service. It is a direct sequel of the original "Final Fantasy IV." From the moment the first chords of theme music began to play ... I was taken back. Back to my first real console RPG experience. Back to one of the awesomest times I can ever remember.

Granted, my enthusiasm is 90% nostalgia based, but it is genuine enthusiasm none the less. I wanted to post here today to share that sense of awe with anyone who might stumble upon my little corner of the web. "Final Fantasy is awesome!!"

You start play as Prince Ceodore of Baron who is King Cecil and Queen Rosa's son. (Cecil and Rosa were main characters from the original game.) You are travelling on an Air Ship to an island to take the test to become a knight. This openning is almost identical visually to the original Final Fantasy IV openning, and if you loved that game the way that I did, you will find yourself instantly immersed.

I am kind of a gaming fuddy-duddy. When FF made the leap to the third dimension and the Playstation ... I didn't follow. These games just didn't feel the same to me. I hope that this game and other "retro" titles like it do well, because some of us old folks are just more comfortable in two dimensions. Not long ago I would have thought this game and games like it were forever gone... figments of imaginations past. But, services like "The Virtual Console" have shown that there is still a market for these kinds of games, and I for one couldn't be more pleased.

So, this is a gaming blog and I'm still talking about gaming... but next post we'll get back to the "pen-n-paper." Thanks for reading my gush.


Jeff Moore
Posted by Jeff Moore at 2:45 PM No comments: