Gaming in the Real World ... 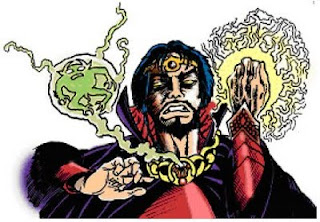 So, it's been over a month since I posted anything ... thought I better get in here and give folks an update. The new version of A+ Fantasy remains my primary design project, but as I am now dealing with the real nuts and bolts of things I have slowed a bit in my efforts. However, I am still working on it and it will get done. Currently, I am planning to release the competed document early in 2010 which will be the original A+ Fantasy's 5 year anniversary.

On other fronts, I am making very real plans to start a regular gaming session in my home. I've become something of an armchair gamer, reading rules but never playing. But, recent plans are changing all of that. My players are old school D&Ders and the desire is to stick with the fantasy gaming genre. No one has books or money so I found myself browsing the web for free gaming solutions to prepare myself and my players for ... "Gaming in the Real World."

My first impulse was to play using "Dungeon Slayers" which I have listed in my side bar as my "Favorite free RPG." Well, upon looking at it, not as a reader but as a player I found that I needed to "Back the truck up." So many little numbers. Add this, subtract that. I tried to imagine running the game and all the little numbers were nickle and diming me to death! Next, I decided to take a second look at Dark City Games' "Legends of the Ancient World."

Legends is based on "The Fantasy Trip" by Steve Jackson. The rules have been stripped of all but their most vital and functional components. The number crunching and annoying nickle and dime mathematics of Dungeon Slayers is gone, but I have lost nothing in functionality and robustness. In fact, TFT has stood the test of time and I am confident that it will give me everything I need. I have played it before so I approach the Legends document with confidence as I begin to plan my gaming session.

I have decided to use the "Lord of the Rats" adventure from the Dungeon Slayers rulebook as my introductory adventure, but play it using the Legends rules. Which is another cool thing about pulling free resources from the internet, the ability to mix-and-match. I also decided to use the Equipment Price list from Dungeon Slayers as the equipment list in the 7 page Legends document is lacking and has no prices.

Speaking of "Mix-And-Match," I have also stolen the "Wicked Fantasy Factory" rules for Mooks, Big Bosses, and Finishing Moves and adapted these to Legends. Check out the free 12 page preview of the Wicked Fantasy Factory Adventure #1: Rumble in the Wizard's Tower for these rules. What I love about this is the attitude, and these ideas can be easily adapted to any combat focused adventure RPG.

On the Dark City Games web site you will also find free paper minis, sample adventures and an invaluable "Charater Creation worksheet." DCG is set up to give away their rules and then sell the adventures and supliments. If the free samples are any indication, these adventures should be well worth the money, and if my gaming lasts for more than a few sessions I will definitely be throwing these folks some of my spare change (if I ever get any!)