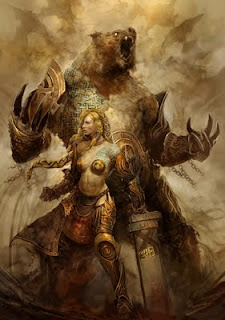 So, I wanted to blog an update before my game today. Yes, I did play (for the first time in about 4 years) for real last week. We used the Legends of the Ancient World free rules by Dark City Games. The rules seemed to work well (although the play-test was limited to only a few encounters.) It took a bit longer to create characters than I thought it would, and one player was late.

The characters are: An Ursan (like a bearman) Hero, a Tigran (like a Tigerman) Mage (Healer,) and a Fairy (used Gnome racial template and subbed flight for invis.) Mage (Wizard.)

I am using the "Lord of the Rats" sample adventure that appears in the Dungeon Slayers free RPG. The players had some interesting ideas about "trolling for rats" using a soup bone or slab of old meat and a long piece of string. Man, I had forgotten how players think. If I had been using a 300 page rule book that I had paid $50 for, there would not have been any rules included for "rat trolling."

That brings to mind a revelation that I have made about gaming and game rules. It seems to me that the more different situations a rules set tries to cover, the more time players and referees will spend with their nose in the books trying to find a solution. What I like is a brief clean rules tool-kit that will arm the players and the referee with just enough ammo to concoct their own solutions based upon the examples set by the rules.

Don't tell me what to do. Tell me just enough that I can figure out what to do for myself. If I understand the tools, that's enough. And I am spending my time playing and problem solving rather than reading.

We managed to get through the cellar part of the adventure and into the first part of the hidden, "Lord of the Rats" dungeon.

Combat with the rats in the cellar went fine and everyone had a good time.

I am also using the "JUICE UP YOUR GAME!" guidelines from the Wicked Fantasy Factory adventure line. I have adapted these to LAW as follows:

Note that success is opposed by ST/3 test at enemies current injury level, so the more hurt the enemy is, the easier it will be to score a success. (A warrior whose Melee FM relies more on precision than brute force may choose to base their FM on adjusted DX rather than ST.)

Remember, you can attempt your finishing move only once each combat.

Using your Finishing Move successfully and spectacularly is worth 1 xp.

A player defender can counterattack or dodge against Mooks as a reaction, but the player does not give up their following turn. Players are still allowed only one reaction each turn.

The Big Badass possesses 1 wish (see karma / wish pg 3) that it uses automatically upon being defeated.

These three rats appear to be made of stone (like the Rat God idol) ... they have 1 strength and 4 natural armor. If they take the 1 damage then they crumble. They have Dex of 12 and inflict 1d6-1 damage. They do not automatically dodge like the Rat Mooks. The Maul Rats (including crumbled remains) radiate magic. When 2 of the Rats have been defeated the Rat God will animate and speak the word:

The third rat plus the two crumbled bodies will disappear and a giant magical maul will appear in the Rat God's hands.

This ornate maul appears to be forged from a single slab of gray granite. The handle is covered in detailed carvings of vicious looking rats and the head of the maul although "squared off" in the shape of a rectangular hammer head has been etched to appear as a stylized giant rat. A huge hammer made of stone would likely be too heavy and brittle to make an effective weapon, but this one has been magicked to be stronger and lighter than its base material. In all ways the Rat Maul functions as a normal Maul (Two-Handed Weapon / DM 2d6+2) but it has a +1 bonus to hit (Treat DX as 1 point higher when making attack rolls with the Rat Maul) and it has a Heft of only 12.

The transformation of the Maul Rats to the Rat Maul

When the Rat God is defeated, the Rat Maul will fall to the ground. When a player moves to pick up the Rat Maul, it will disappear from their grasp and transform back into the three Maul Rats. These rats will be "animated" stone creatures under the control of the person who grasped the Maul. The two crumbled rats return restored to full health.

That was my idea for Phat Lewt for the "Lord of the Rats" adventure. One of my players (the Ursan) is working on boosting his ST so he can get a Maul, so the pun was just too much fun to leave alone.

Anyway, that's all for now. I am playing again tonight and will happily post about that game when I can.