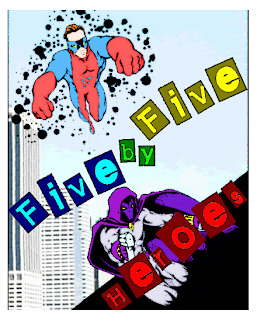 So, I haven't posted in some time. I am still busy working on RPG design but work on A+ Fantasy (2010 edition) has evolved into work on something else entirely. The Fantasy genre of A+ wasn't engaging me, also ... I feel that there are fantasy games out there already that do most everything right. Or right enough for my tastes ... nothing much for me to "fix."

I can't say the same for the Superhero genre however and I found as I was going over my old RPG designs and consolidating my ideas, I kept migrating in that direction. I have designed a number of games but those who know me will see a recurring interest in games in the super hero genre. That's because I am a comic book fan. I have been since I was a boy and that interest has never left me.

I love comics and RPG's but the perfect comic book RPG has yet to be made (in my opinion.) This includes my own efforts. Of the works available today, I would have to give my highest marks to Chad Underkoffler's Truth and Justice. Of those games of yesteryear my favorites are the Marvel Saga Adventure Game (the one that used cards) and Mike Pondsmith's Dream Park.

I like these games because they each maintain a simple mechanic. I want my RPG's to be simple to teach, simple to learn and quick to play. Where most of today's (and yesterday's) games fail (again, my opinion) is: Character Creation.

Most of these games have very complex rules for creating new characters and even those that do not provide the player with such an open canvas for creation (comics being a genre of infinite character variety) that players must come to the table with a clear concept of the character that they wish to play and often an understanding of how to implement that concept under the rules.

This isn't very friendly to a new player, or a casual gamer. Also, I detest point by construction systems for character creation which is the norm not only for Superhero RPG's, but for most modern RPG's in general.

Expecting a person who has not played an RPG before to construct an original idea through a point buy system can become daunting and off-putting. When I first began to play RPG's I was introduced to the game through Dungeons and Dragons. Roll a few dice, make a few choices and you were ready to play.

This may seem limiting or restrictive to experienced players, but it didn't seem that way to me at the time. D&D wasn't sold to me as a simulation of limitless possibilities and I wouldn't have known what to do with it, if it was. It was a game, plain and simple. I was given a handful of simple understandable choices and any choice could alternatively be rolled for if I didn't have the answer. It was fast. It was easy. It was fun. And, it was accessible.

I don't think that most super hero RPG's are by their nature very accessible. I think that primarily this is due to the nature of character creation and that in many cases the ultimate game play itself is not hindered as much.

This is a problem that I tried to address with both, Hi/Lo Heroes and Powers Brawl. Both games attempt to solve the problem of character creation by introducing a "Choose or Roll" approach to character creation that allows a novice to begin play after only a few simple choices or die rolls.

I do believe that these games succeed in the "character creation" arena. But, I don't think that they manage to capture the best in game play. So, I succeeded in one area but lost in another. As I have been going over all my past RPG designs and distilling the best of my ideas into one cohesive whole, I hope to resolve this problem and finally design a Superhero RPG that for me wins in the areas of both: character creation, and game play.

And so, my design work continues but the focus has shifted and A+ Fantasy 2010 has become 5x5 Heroes ... a marriage of 5x5 and Hi/Lo Heros (and Powers Brawl and Prometheus Blade.)
Posted by Jeff Moore at 4:43 PM