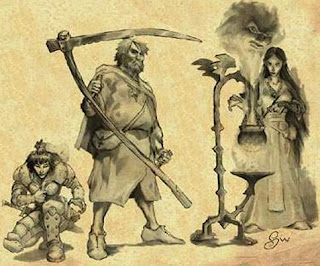 The trend in todays world of RPG's is to shun the class system and create game mechanics that focus on a more free form method of character creation. This sort of mechanic becomes especially vital when character archetypes cannot be easily defined such as in a genre as varied as comic book super heroes. So, why then, for Xceptional, have I chosen a class based character foundation?

When I first began playing, I was introduced to the concept of the game, given a quick over view of four basic classes (Fighter, Cleric, Magic-User, Thief) and four basic races (Human, Elf, Dwarf, Hobbit) these were my choices. I didn't really know what it all meant (exactly) but it was explained to me succinctly enough and I chose a Hobbit Cleric (was told that Hobbits can only play thieves) changed to a Hobbit Thief … and I was up and playing in minutes.

Did it matter to me that Hobbits couldn't play Clerics? Nah! I just wanted to play. Fast forward a few years to my first encounter with a super hero role-playing game: Champions (then 2nd Ed.) … here there were no easy choices. I had gone from a salad bar where I was asked to select from 3 dressings, croutons and bacon bits, to a fully stocked super market where I was told … create something delicious.

Sure it's awesome to be presented with so many choices, but the problem with limitless possibilities is these can lead to limitless questions. Creating something delicious can be quite the challenge, if you have never cooked before. I made my Champions Character (it took hours) and we did play for a while, but I always wondered why they couldn't have made the whole process easier. This has been my impression of nearly every supers rpg that I have encountered since. I have always wanted to make one that was easier … which, I suppose is why I'm here.

In the Scify channel series Eureka they have this restaurant, Café Diem. We are supposed to be so impressed because the cook can prepare anything that you want no matter what it is. The restaurant doesn't have a menu, you just tell the cook what you want, and no matter what, he can make it. This is supposed to be amazing and impressive. It would drive me absolutely batty!! I have no idea what I want! Do you have any idea how many happy relationships have been horribly ended by the question: What do you want for dinner tonight? … a LOT. Trust me, a menu is better. Classes are better.

And for those nay sayers who believe that Classes limit choice … well, my Hobbit thief got a staff of healing made by the Hobbit goddess, Yolanda or some such, and I was able to have my cake, and eat it too. The moral of the story being, that no matter what the rules of your game are, players will play the way they want to play. I believe this happens best at the table during game play itself and not during hours of character creation ahead of time.

There is a reason why games at conventions generally have characters already made up. Because players want to play … character creation shouldn't get in the way of that.