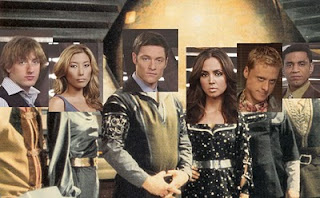 The news that FOX is working on an American version of Torchwood (and maybe Doctor Who) is weeks old now.

But, it got me thinking ... if FOX really wants to bring a British science fiction series to the American small screen. Why do Torchwood that everyone in America has already watched (and the British version will always be better?) Why not choose a series that NEEDS a relauch and that would be unfamiliar enough to the American public to avoid the danger of a comparison?

Personally, I would approach Joss Whedon and Mutant Enemy Productions and beg them to take on the project. Joss tends to favor actors he's worked with before so going this route will give us a head start on a cast too! Since the cast of Doll House are out of work...

Tah Dah! Welcome to my Americanization that I call: Blake's Dollhouse!