"You give me Fever!" - Adding ELEMENTS to Xceptional 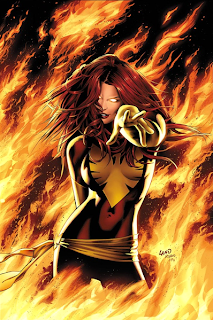 In the comics, Super Powers have elemental sources (like fire or electricity) and heroes and villains are victorious or defeated often based upon their resistance to, or vulnerability against certain elements.

Adding elements to Xceptional is actually really easy. The trick is determining what sort of element a character's powers are based on, and then what that means to the character in terms of strengths and weaknesses.

HOW RESISTANCES AND VULNERABILITIES WORK.

There are no effects greater than Critical Success or lesser than failure.

I am fond of mnemonics and like to use them to make the stat block easier to read. In the case of Elements, I use the word FEVER to help remember the order of FE (Foundation Element,) EV (Element Vulnerability,) and ER (Element Resistance) on the stat block.

Remembering the mnemonic FEVER, we see that the Dark Lord above has a Foundation Element (FE) of "Shadow," an Element Vulnerability (EV) of "Light," and an Element Resistance (ER) of "Shadow."

ELEMENTAL CHAMELEON: You can change your Foundation Element to a different one for the duration of your turn. You can only use this Xception if your unadjusted Initiative roll is equal to or lower than your ranks in Elemental Chameleon.

LACK OF WEAKNESS: Ignore the effects of Element Vulnerability until the next Initiative Sequence. You can only use this Xception if your unadjusted Initiative roll is equal to or lower than your ranks in Lack of Weakness.


INVULNERABILITY: You can change your Element Resistance to a different element until the next Initiative Sequence. You can only use this Xception if your unadjusted Initiative roll is equal to or lower than your ranks in Invulnerability.

Elements make a logical addition to the Xceptional game mechanic, and their inclusion seems to integrate well into the existing rules set.

As always, feedback is welcome.