Squadron UK may be the best Free RPG on the web ... 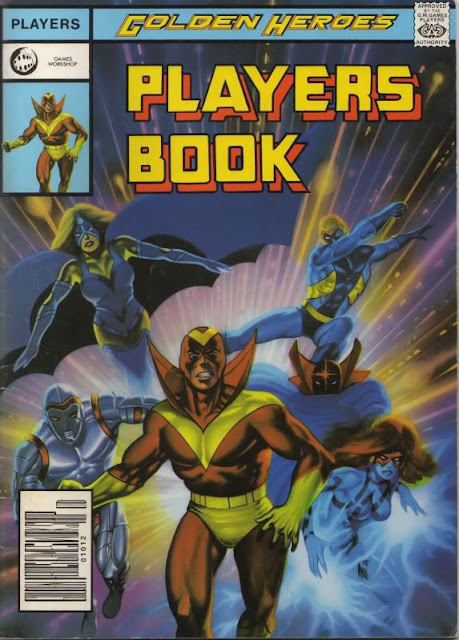 Squadron UK was originally published as a game called: Golden Heroes. Interestingly, I owned the boxed edition of Golden Heroes but never played it. I traded the game for a copy of the revised edition (2nd Ed) of Villains and Vigilantes. I owned the original first edition of V&V but wanted the superior updated version. Besides, friends had played V&V ... no one had played Golden Heroes, so, V&V was an easier “sell” to my gaming group.
My traded copy of V&V came with a lot of supplemental materials, a slew of villain books that had wonderful illustrations by Jeff Dee and paper counters on the back cover. I don’t regret the trade, but thinking back now, Golden Heroes was a beautiful package and one I should have found a way to keep a hold of.
This feeling that I had really given up something great is compounded as I look at the free version of Golden Heroes called, Squadron UK: Basic.
There are a handful of free “quick-start” game products out there. Most of these are stripped down versions of a game meant to give players just a “taste” of what they can expect from a game. These are cool, but I don’t categorize them as free RPG’s. I categorize them as advertisements. Nothing wrong with that, but it’s a distinction I think I should make before pointing out that, Squadron UK: Basic is no advertisement. It is a free RPG.

The free download available from RPG Now is 31 pages and very complete. It looks to me to be tighter and better presented than 4C and it might be (at least on paper) the best free supers RPG available if it plays as well as my “gut” tells me it will. As I mentioned, I never played Golden Heroes. So, I don’t know how it plays, but being a fan of old school RPGs, I see a lot to like here. I am newly excited about this game in a way that I never was back in the late 80’s.
Squadron UK is pretty old school in a lot of ways but it looks like it can handle comic book style super heroes with flair, and given that 4C just somehow failed to excite me, this gem was a joy to find. For most of you, this won’t be news ... but I hadn’t given it a look before now, so maybe there are others out there who missed it too.
Squadron UK: Basic is free and very complete, but there’s more good news ... It’s just the beginning. The game has a pay version that includes helpful examples, a few more powers, and attractive artwork. All wonderful things for those who try and enjoy the basic game and decide that they want more. Plus supplements ... additional materials to add to your game should you find Squadron UK as wonderful as I believe you will.
Give it a look. The price is definitely right. Supers RPG’s ... I love them.
Regards,
Jeff Moore
Posted by Jeff Moore at 5:05 PM