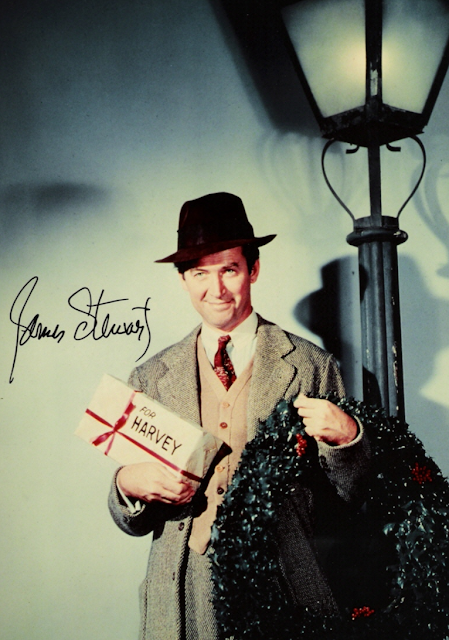 So for our second weekly classic movie night we watched the Jimmy Stewart film: "Harvey" from 1950. Harvey is another comedy. I begin to realize as I look back at movies that I want to watch that many if not most of them are comedies. I personally think that the classic movie comedies had more style and substance than the majority of what we have today. I am not sure it's really the case, but it's just the romanticized memories I have of them.

Harvey is about a man, Elwood P. Dowd (James Stewart,) his sister Vita (Josephine Hull - who positively steals the show,) and her daughter (Elwood's niece) Myrtle Mae (Victoria Horn.) The Dowds are a well-to-do family and Vita has high aspirations for her daughter Myrtle Mae to marry a wealthy influential man. Vita's plans are challenged however by Elwood, or rather Elwood's unique problem.

Elwood it seems is the town crack-pot. I am not sure when "Harvey" is set, but I am going to guess 1919 which puts the story just after World War 1 and just before prohibition. (Elwood frequents bars and Vita makes a point of criticizing his drinking.) There are telephones, but I never see a radio or TV ... there are cars, but I am terrible with identifying models of cars, so for me ... they are no help. But the asylum where Vita tries to have brother Elwood committed has a new electric gate (invented by the gate guard) that is seen as a novel and new concept, if that's any indication. Anyway, the point I am trying to make is that in this setting or time period, it seems that people's views of "crazy" are pretty extreme, as most, after meeting Elwood, go running in the other direction screaming.

Elwood has an imaginary friend. A six-foot tall upright walking, talking rabbit named, "Harvey." Elwood introduces "Harvey" to Vita's guests at a fancy dinner party that Vita has arranged for her daughter Myrtle Mae and this has the effect mentioned above, scaring everyone away. Vita is at her wit's end and calls her good friend the mayor (who obviously has a soft-spot for Vita) and puts into action their plan to finally have dear old Elwood committed.

"Dear-Ol' Elwood" is an appropriate moniker because no one in town is kinder, sweeter and more generous than Elwood P. Dowd. As a human being he is "pleasant" to a fault. It is this quality that endeared me to Elwood and to the movie Harvey. It is this quality that ultimately saves him from the asylum and allows the movie to end happily ever after.

I remembered really enjoying Harvey when I saw it as a teen, but my fellow classic movie cohort admitted to not really loving the film. ("It's okay ... " she had said.) I don't believe this re-viewing of the film changed her mind any, nor did it mine. I loved the film as much as I had remembered, despite forgetting about the absolutely forgettably contrived romantic story thread between the doctor at the asylum and his nurse. The nurse ends up with the doctor that she is obviously crushing on (some women are attracted to abuse) but, if I were her I would have slugged the obnoxious doctor in the chops and ran away with crazy, lovable Elwood. Perhaps it was this story line that had annoyed my friend. It detracts from the movie as a whole ... but it's not really important.

What is important is the mirror that the film holds up to the world as it asks the question, "Must we all go insane before we decide that it's okay to be kind to each other?"

I love this film. I love it because it has a genuine heart and soul that so many films today lack. I like it because I see a tiny bit of myself in Elwood and a lot of my dad and mom in the relationship between Elwood and Vita, as a man who was maybe too kind to every person that he met and a woman who wasn't so sure that this overt friendliness wasn't just a bit too overt.

The group had mixed feelings on this one, I obviously loved it, as did the other male member of our classic movie club. My girl friend fell asleep near the end, an indication that the film moved just a bit too slow. My classic movie partner in crime, seemed to be fairly indifferent, enjoying the film, but not over much. So, to engage her for next week I asked her to pick the next movie. She has chosen the Audrey Hepburn and Fred Astaire classic musical, "Funny Face." I've never seen Funny Face so, I look forward to next week.