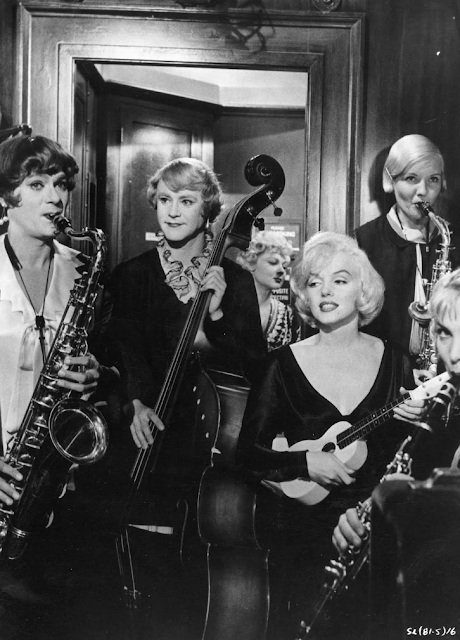 So, I have a friend who, like me, is really into older classic movies. I grew up spending the wee hours of the morning watching really old movies on TV in the days before cable TV (or at least the days before we had cable TV.) Local broadcast networks would show old movies and there was no such thing as Turner Classic Television or whatever that old movie channel is called. We got to talking about old movies while other friends who were with us sort of "rolled their eyes" like we were crazy ... and we decided then and there to institute a "Classic Movie Night" to watch an old movie together and show these uppity young'ns what they were missing.

For our very first Classic Movie Night I chose the Billy Wilder / Marilyn Monroe comedy, "Some Like It Hot."

Some Like It Hot is about two down on their luck musicians from Chicago, Joe and Jerry (Tony Curtis and Jack Lemmon,) who play any job they can get during the prohibition era of the 1920's. The beginning of the film finds the pair playing jazz at a speak-easy run by mobster Spats Colombo (George Raft.) Joe plays tenor sax and Jerry plays base fiddle. Working for the mob proves to be dangerous business however, and the two are witness to the massacre of a rival mob (on Valentine's Day, no less.)

The only witnesses to the murders and being pursued by the mob, Joe and Jerry need to get out of town in a hurry, but they have no money and no real means of escape. Fortunately, a local talent agency is looking for a sax and a bass to play on an all expenses paid gig in sunny Florida. It's perfect. The catch? It's an all girls band. What happens next is obvious as Joe and Jerry become, Josephine and Daphne (Jerry never did like the name Geraldine,) and Some Like it Hot becomes one of the first buddy-movies in drag.

Initially, the two plan to maintain the ruse just long enough to get to Florida and then run for it, but on the train bound for Florida, Joe becomes enamored of Sugar (Cane) Kowalski (Marilyn Monroe) and convinces buddy Jerry to stick around for the long haul. Before the plot has even a second to settle down, Jerry is taking on a third persona as a millionaire named "Junior" (Shell-Oil, Junior) which Curtis plays in a cheesy Cary Grant affectation. Sugar falls for Junior/Joe/Josephine's shtick and Jerry/Daphne is roped into dating an actual millionaire (a dirty old man who pinched her/him in the "elevator") so that Junior can stage his date with Sugar on the millionaire's yacht.

Just when you think things can't get any more crazy, who should show up but, Spats Colombo and his gang; there to attend a convention for "Lovers of Italian Opera" which is code for every mob family from every major city in the United States. Joe and Jerry spot the mobsters and try to run, but stumble instead into another massacre.

As a side note, Marilyn looks absolutely beautiful in this movie. Despite being at her largest size on screen, she is also at her sexiest. And she wears some of the most fantastic (and sheer) sequined gowns ever seen on the silver screen. This movie pushed me from boyish innocence to lustful manhood when I was fourteen, and it probably explains why I've always found the most beauty in "full-figured" gals.

Now, if I can just convince my gal to dress as Marilyn for Halloween. I think "Some Like It Hot" just may have convinced her. Anyway ... a great time was had by all, and I am happy to declare my first official Classic Movie Night a grand success.