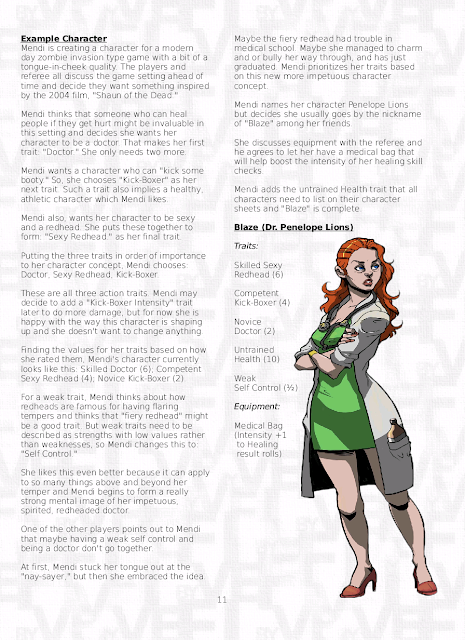 In revising character creation for this new version of Five by Five, I tried to actually streamline the process even more than it was in the original version of 2 years ago. I cut back on the number of starting traits and tried to make rating of traits more intuitive.

With the new rules and the first substantial rewrite from the original edition the character creation section looked a bit of a mess.

Rob Lang's Free Guide to organizing your RPG has some very specific instructions regarding the content and organization of the character creation section ... maybe it will help. Rob advises:

Begin this section by listing all of the steps so that the reader knows what is coming.

Then describe each of the steps, giving examples when needed.

Optionally, include a start-to-finish character generation.

Make sure your example character will fit into the example adventure you provide.

Don't put your skills inline unless there is only half a page of them. Put them in the Appendix.

Rob advises not putting you "skill lists" in the character creation section. All though this has been a topic of some debate, I had already pulled my rather random (and long) list of skills out of the section and tucked it away in the back.

An explanation of Trait values included a few tables in line, but I didn't want to move them. But there was something here that did need moving. I had placed lists of equipment and information about equipping a character in my character creation section and I decided that this stuff needed to go.

I pulled the information about Equipment out of the character creation section and things got much better very quickly. Now I am feeling pretty good about the flow of the document and I am ready to take the next step:Mechanics.

(I was really pleased with the character creation example. The example character's concept changes as a result of the player's choice of "weak trait" and is reevaluted mid-stream. I think it's a good example of how a character concept can evolve as you begin to apply the "rules." The example character page is shown above as my blog post image. Click on it and check it out at full size.)
Posted by Jeff Moore at 3:33 PM