Five by Five: The Introduction 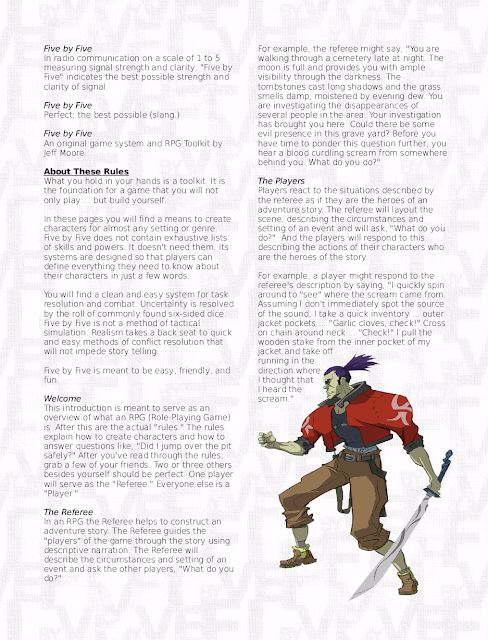 Rob Lang's Free Guide to organizing your RPG defines the next section of your RPG to be: The Introduction, and Rob has some pretty specific ideas regarding what that introduction needs to contain. Here's what Rob has to say:

The introduction is likely to be the first thing that the reader will go to after the cover, so ensure it is fluffless.

It must include the following:

At first, I took a look at the text of my "Introductory Section" which is really a collection of sections that contain what I consider to be introductory-like content, and thought ... this isn't going to work at all ... I'm going to have to rewrite everything. But, I took a deep breath and a step back, and in a moment, I was feeling up to the task.

One of my primary goals with this specific project is to revise the Five by Five rules while retaining as much as possible of the original (without rewriting it.) I don't want to create another new game. I just want to improve an old one. Ultimately, I added one paragraph to the beginning of my "introductory-like content" and in so doing satisfied most of what Rob is asking for in the Guide.

My original introductory-like content is sort of a lite and very broad / breezy look at what an RPG is. I haven't gone back to find it in Rob's guide but I seem to recall that the guide specifies another place for the "this is an RPG/How to RPG" type stuff (I think in an appendix.) I considered moving it, but decided not to.

Many games that I have read begin with a "this is how to RPG" section and although it's true that free online RPG's are most likely being read by experienced gamers only, I also know that experienced games have all seen this kind of content before and are adept at skimming through it to the next useful bits.

That said, should aforementioned experienced gamer give a copy of my game to her inexperienced little brother, I want the "How to RPG" type stuff right there up front in line where he can't help but find it. So I chose to leave this content as is. I don't consider it "fluffy" and to certain readers, I think it's essential. Plus, in reading over the introductory bits of my original text I found that they segue nicely into the section on character creation that comes next. So, I kept everything ... but I did add a little more.

What is in the book? System? Setting? Sample Adventure?

My original content didn't really seem to address this directly so I added a new paragraph at the very beginning of my introductory content with the header, "About These Rules" and I placed this information there.

There was a tendency to get "listy" here making the rules read like a text book. I don't want that and tried to keep the tone of this information more conversational. I talk about system in a very general way, letting hardcore RPG folks know that Five by Five is not the crunchy combat simulation they've been looking for. I don't talk numbers and processes here, but rather ideas and concepts.

What is the genre of the setting? What are the major themes?

Five by Five is a genreless RPG toolkit by design. It's what I want. I would love to see others with an interest in the system create "settings" books for Five by Five that narrow the system down to specifics, but that's not what I want to do here. That said, my introductory-like content from the original text talks about genre and themes in a very general way. It speaks about Five by Five's flexibility to adapt to any genre and any theme. I felt that filled the requirement here.

What will the characters do?

This is there in the final section of introductory content called, "Epic Heroes." It talks about the roles the players will take and the kinds of heroic characters they will play. This is the bit that I felt transitioned into the character creation section so well. Retained from the original rules unchanged.

What sort of mechanic is it (dice/diceless/pool)?

The technical bits about the system didn't exist, but I added just enough in the new paragraph I mention above to cover this final bit of "required information."

So, does the new paragraph add anything to the Five by Five rules? Well, it certainly can't hurt. Also, one thing this process did was make me realize that my "introductory-like content" was not really defined as a cohesive whole. It was made up of several small independent sections each with its own header. I changed this by creating sub-headers (which the original rules didn't have.)

Looking at the text now and seeing the introduction as a cohesive whole, and as an independent section distinct from the sections to follow, improves the flow of the Five by Five text quite a bit and Rob's Guide once again fulfills it's purpose as an effective organizational tool.