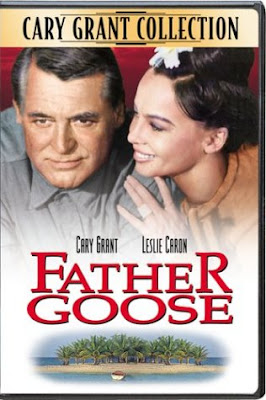 This week's classic movie was "Father Goose." It stars Cary Grant and Leslie Caron and was chosen by one of my friends who doesn't consider himself a classic movie fan. That said, the choice was rather awesome. Set during World War II and specifically the campaign in the Pacific, Father Goose looks at a man stationed in one of many small islands in the Pacific who is positioned there to observe enemy movement through the region. That said, Father Goose isn't a war movie at all.

Father Goose is Cary Grant, a cantankerous old American bullied by the British Navy (and an old friend played by Trevor Howard) to serve as a sentry on one such island in the Pacific. Grant's character knows the islands well, and the British Navy is spread thin. The set up which has Howard tricking Grant into doing his bidding by hiding Grant's whiskey feels painfully contrived but is forgivable once the real fun of the film begins.

Another sentry on a nearby island is endangered and Grant is pressed to go to that island to rescue his counter part, promised that should he succeed, the rescuee will take Grants place on his island and Grant will be free to return to his normal life as a bounder. Grant goes to the island to find the other sentry dead, and something else. A school teacher (Leslie Caron) and several young students (all girls.)

Grant manages to get the entire group back to his island, but is seems that it will be weeks before Howard can get a rescue team to the war sieged island to recover the girls. The rest of the film features Grant trying to cope with intrusion of the girls and Caron specifically.

There is an "opposites attract" chemistry between Caron's seemingly prudish schoolmarm and Grant's seemingly uncultured old goat. Each reveals a hidden depth that betrays their outwardly demeanor and Grant not only bonds with the young schoolgirls under his care, but also Caron. In the climactic final scenes of the film, Howard marries Caron and Grant via radio while Japanese planes strafe the island with machine gun fire.

The film is meant to be a comedy, I think. But, the comedic moments aren't so much "laugh out loud" funny as they are "put a smile on your face" amusing. The film has a charm that kept the audience engaged and entertained from start to finish and the overall opinion from our group was a positive one.

Next week my girlfriend the "I hate old movies girl" chooses a movie ... and wait until you find out her choice ...