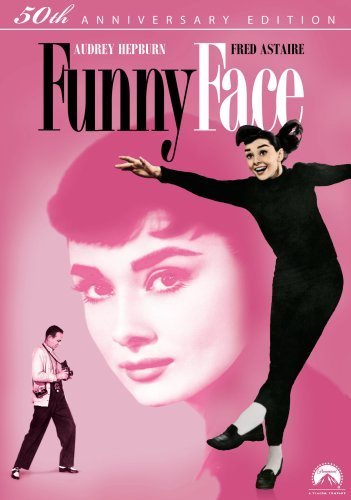 Funny Face was chosen by my fellow classic movie fanatic. She is a fan of musicals, and of dance movies in particular. Funny Face is just that, a big, beautiful, dance / musical. Honestly though, I am not sure how much I really liked it.

Audrey Hepburn is absolutely beautiful in the title role and her dancing is superb, but she can't sing. Fred Astaire is also not the best of singers and generally more remembered for his dancing. The two strong dancers produce some very nice dance numbers. But the musical numbers are mostly weak and forgettable.

I have stuck in my head another Astaire dance vehicle with Leslie Caron called Daddy Long Legs that he had done a few years earlier and I seem to remember liking that one so much more although I think it was very similar to this film in many ways. I think this film is so warmly remembered specifically because of America's love affair with Audrey Hepburn, who certainly is lovely ... but for me it wasn't enough.

The story is a woman who runs a bookstore is recruited as the new face in fashion because of her "Funny Face." She agrees to go along with the scheme because it means a trip to Paris to meet a personal idol of hers. She gets to Paris and her idol has his hands all over her. She is rescued by the fashion photographer who she has fallen in love with and after a bit of a contrived game of cat and mouse / hit and miss, they end up together in the end.

I do however seem to be in the minority in my opinion here. The rest of the group enjoyed the movie and my girl stayed awake all the way to the end which she claims is testament to the fact that "Funny Face" was better than "Harvey."

I think it might have something to do with how tired she was, but maybe I'm just being too hard on "Funny Face" ... it is a recognized classic among classics and loved by many. So, on this we will agree to disagree.

For our next film we allowed one of our "non-classic movie watchers" to pick. He was up to the task and picked a classic he remembered enjoying as a kid ... "Father Goose."

This is a Cary Grant movie, that also stars the aforementioned Leslie Caron. I haven't seen it, or at least I don't have a strong memory of it ... so, I look forward to our next classic movie night.