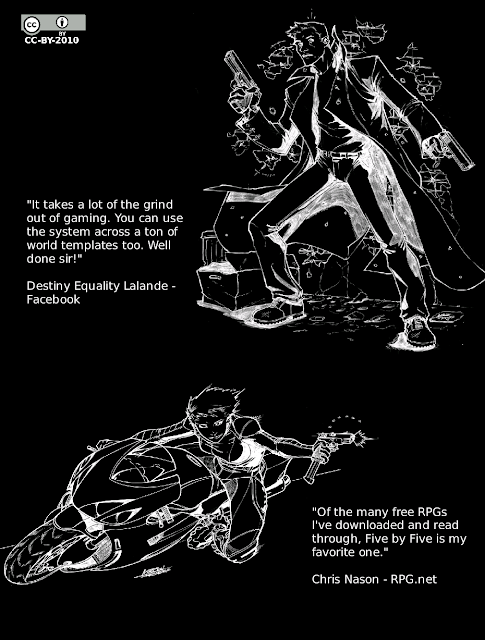 Those are the elements that I haven't yet covered, and the order in which they appear in Rob Lang's Free Guide to Organizing Your RPG. I completed work on my Five by Five rewrite this weekend, so here then is my final blog entry on following the guide.

The next section following mechanics that Rob not only recommends, but pretty much demands that you put in your RPG is the setting. Rob argues that a free RPG lives and dies on it's setting. The thought is that there are dozens (if not hundreds) of commercial and free RPG's already available that cover the topic of the role-playing game. He argues that persons who are surfing the interweb looking for a free RPG are going to be hooked by a unique and interesting setting, because it is only through a unique or interesting setting that a free RPG designer can truly offer something special.

I disagree with this view pretty much full stop. Settings and backgrounds are more widely available than any other form of gaming resource. Why? Because when gamers choose a setting, they don't restrict themselves to looking at role-playing games. They look to books, movies, television ... the entire embodiment of adventure and dramatic fiction is available to the game player as a source for settings inspiration.

When I look for free RPG's on the web, setting isn't a concern ... it's playability. I look for a system that looks fun and easy and accessible. Commercial games are generally tied to their settings in such a way that they can't be separated from them, or they are based on the same d20 system that everything else is based on ... and I don't want to play that. I want a GAME that I can apply to MY Setting. A game that's lite and accessible that's not strangled by someone else's idea of a setting and that isn't overblown and over written to sell volume after volume of gaming book.

I created Five by Five to be a lite and easy system that gamers can apply to the setting of their choice and play with a minimal learning curve. I believe I have succeeded in offering something special by creating a truly usable and fun game system. It's my hope that my system will attract those who are looking for another way to play.

All this to say ... Five by Five is a generic rules toolkit. It doesn't have a setting. So, this section is omitted, and those are my reasons why I don't think that is a bad thing.

The original Five by Five didn't have a GM's section, and it needed one. With a game that is as open to interpretation as Five by Five, some general guidelines on ways to control and adjudicate the use of traits is sorely needed. I have added some of that here and also a brief discussion regarding selecting a setting. This section could use some more work, but it's just been added and I think I will let it be for awhile and perhaps revisit it for a rewrite later on.

For now the GM section serves the rules in a positive way and that's good enough for me. There is no sample adventure here for much the same reason that Five by Five doesn't have a setting. Down the road it might be fun to include a number of sample settings and adventures to go with them that could highlight the versatility of the system, but for now I have decided that I would rather do without that stuff all together rather than do it half way.

Ah, finally a place for my equipment list and for a generic list of possible traits. These were both in line with the rules text in the original Five by Five but moving them to the back as Rob suggests truly does help the document flow.

I actually had a few unsolicited testimonials from the original Five by Five that I put on the back cover. It makes my game seem like something someone has played rather than just something I work on in my parents basement for my own amusement. Life is good.

Five by Five version 2 is done. I am going to be play-testing this with my friends and I am excited about this new version.

When I wrote Xceptional I was trying to marry Five by Five with Powers Brawl. That was a mistake. Five by Five is a free form rules-lite RPG designed for story telling. Powers Brawl is a strictly mechanics driven, structured combat miniatures game designed for strategy. I was hoping to mix the two and create something that was the best at both. Instead I ended up with something that wasn't as good as either one. I call it a failed experiment.

That being said, I am done reinventing the wheel. I have written one half-baked game after another looking for the magical cookie-dough recipe that would make me happy and I think I have found it in Five by Five.

Five by Five is the first game I've written a revision for. It's the first game of my own design that I have felt strongly enough about to bring it back to the drawing board. It's a game that I want to bring to my gaming table and play. It's a game I believe I will be able to promote and pursue beyond it's very basic beginnings.

I am offering Five by Five to the world under the creative commons attribution license in the hopes that the game might become the mechanical vehicle for settings and back grounds created by others. I see Five by Five supplements for fantasy, science fiction and super hero genres appearing in the future, authored by other game designers than myself.

Pretty much moments after I had finished Xceptional I looked at the finished product and frowned. Despite the hyperbole of my own creation here in my blog, it didn't take long for me to realize that I had missed the mark with that game.

Five by Five is different. I started with a game I felt very good about and improved it. I fought hard not to allow myself to change the things that worked, and worked just as hard to be honest with myself about the things that didn't. I feel like every choice I made has made the game stronger. But, I also feel like I was successful in not changing too much.

This version of Five by Five is available in my free RPG list for download. Please give it a look. If you are so inclined, compare it to the original to see what I have changed. I think you will see that the evolution of the game from version one to version two is a beneficial one.