Five by Five - The Mechanics 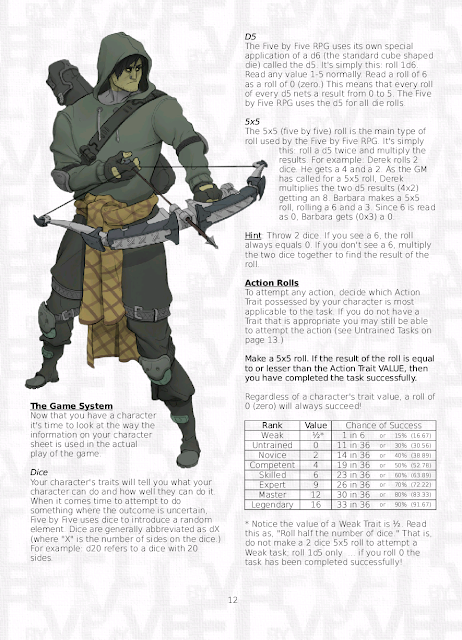 Rob Lang's Free Guide to organizing your RPG defines the next section of your RPG to be: The Mechanics. Most of what Rob suggested belongs in this section actually comprised the majority of my original text. In fact everything from this point forward that I talk about while following the guide will be new material, because everything from the original Five by Five that I have written that isn't about character creation belongs in here.

I love game mechanics. Tinkering with differing methods for resolving randomized tasks using different dice or different ways of reading dice is what this game designer is all about. I did find as I was importing my original Five by Five text into this new edition that the text didn't flow very well. I read through what I had a couple of times, moved a few things around, pushed the piece about equipment further to the back as it still didn't fit, and added some new explanations and transitional text.

I added a specific section for combat and introduced new initiative rules (that I think are brilliant) that treat initiative the same as any action roll to complete a task.

To roll initiative you DON'T play "high card" with the other players and go in order from highest to lowest. It's a task roll and you try to roll equal to or lesser than your initiative trait as you would when attempting any task roll.

That the initiative mechanic works the same as all other task rolls and doesn't use it's own special rules is a "win" in my book and I don't think I've ever seen another game handle things quite this way. It's a simple and I believe eloquent approach to a legacy mechanic that's remained unchanged for ages.

Task resolution itself remains unchanged. It's the strong point of Five by Five and it's where the game gets its name. To review it works like this:

All task rolls are trait tests. To complete a task first determine what trait is most appropriate for completing the task at hand.

If the number rolled is equal to or less than the value of the related trait the action succeeds.

A 5x5 roll is a roll of 2d6 multiplied together with one special qualification, if either die rolled shows a "6" the result of the roll is "0."

Trait values range from 2 to 16 with anything undefined having a value of 0.

The graphic this time around is the page that talks about the dice and basic task resolution, give it a look if you are curious or click on "My Free RPG's" at the top of the page and down load the original version of Five by Five and give it a look. Everything is described there.

Despite being the least changed section from the original, this section has taken me the longest to pull together and format thus far. That said, I expect the next portion to require even more work. It has never been written.