Tormenta (Storm) - The most popular RPG in Brazil 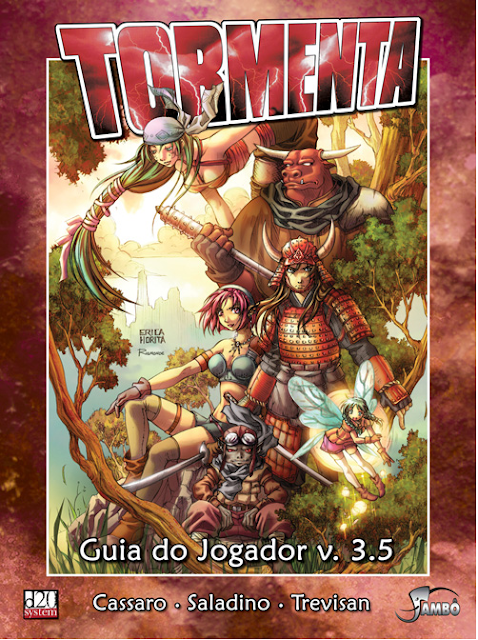 So, since a friend ... okay, someone I completely don't know ... but I call him friend because he found my game! (see previous post) ... Anyway ... since this friend found my game, I've been browsing his blog site. It's an RPG news site written in Portuguese that's been around since 2002 (8 years is a pretty impressive lineage on these interwebs IMO.) He talks about Mini-Six which is a super cool free RPG that I've also mentioned here as well as others, and he talks about games written in his native language (obviously.)

One that I have never heard of (no reason why I should have) is called "Tormenta" (translated from Portuguese as Storm or Tempest.) It's a D20 fantasy game using the 3.X Dungeons and Dragons framework but it seems to be its own unique animal. And I want one.

The Goddess of humanity has been transformed into a statue. The Alliance of Black goblinoids relentless advance of the kingdom. The Lords of the Storm launch storms of blood and demons. This is a world giant dragon-kings, high priests invincible and conflicts between the gods. A world that desperately needs heroes.

You agree to be one of them?


I don't know about you, but it looks pretty awesome to me. I have been playing 4e for a few weeks now, and honestly I've become a bit disenchanted with the newest version of D&D.

I see 4th Edition this way. The rules have been streamlined to create a cohesive and consistent combat mechanic. Where ever possible the rules have tried to make every form of action work the same. A swing of a sword and the casting of a magic missile now use the same mechanic for example, but are based on different character stats. (And a magic missile can "miss" its target.) This "streamlining" and "consolidating" of systems has served to make the game more uniform. This uniformity is then "cheated" by rules exceptions called "exploits."

Exploits are everything your character can do. A wizard casts a magic missile. That's an exploit. A warrior cleaves through an enemy. That's an exploit. And there are many, many of these. Exploits each do something a little extra, above and beyond the basics of the rules. They are what makes each character unique and interesting (or at least, this is the intent.) Think of a collectible card game. There are strict rules and structure and then cards are provided to "break" the rules.

That's 4th edition. It's a collectible card game, or a board game. It's a tight structure with a simple streamlined system that is then riddled by "micro-rules." Exploits manipulate structure in exactly the same way as a card in a collectible card game might do. They don't however inspire a lot of "ideas" for ways to manipulate, change or re-imagine the effects of these exploits within the context of role play. They are only mechanical. And because everything has been streamlined to work identically and everything is "only mechanical" ... everything feels the same.

I want some tasty new fruit. Does anyone know if there are any plans to translate Tormenta into English for North American consumption? Because it looks like an amazing fruit salad of goodness to me!