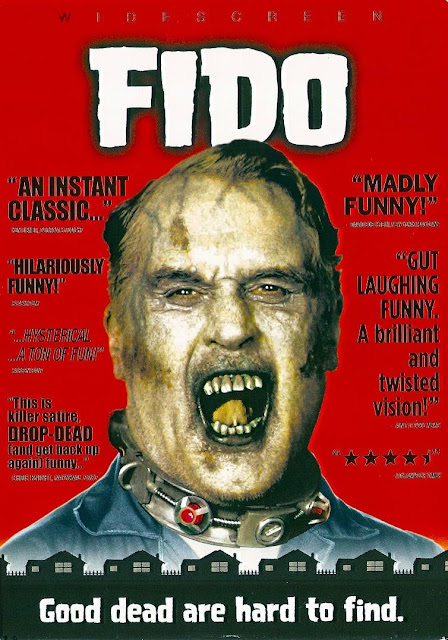 So we are playing a Zombie game that a friend is GM-ing. He chose to use the 5x5 rules (I didn't even have to pay him!) and I think we are all very pleased with the way things are working out.

Our first session was pre the most recent rewrite of 5x5 (and is what prompted it.) The GM told us to make up the typical victim turned hero type that might appear in a Zombie Apocalypse kind of movie.

He had us pick our three strong traits but informed us that HE would be "giving" us our one weak trait.

It took no time at all for each of us to pick three traits and write them down. Character creation was finished in moments, even though none of us had been prepared ahead of time.


I made a character and chose three strong traits.

Once this was done, the GM informed us that we were in actuality all Zombies and explained to us the world we lived in based loosely on a movie called Fido.

He then gave us our "weaknesses" based on this revelation. Mine was that my character was missing a foot. Which I turned into a weak rank trait and added to my character.

Add to this that the character is wearing a shock collar to keep him in line, using a walking cane (that serves as a +1 damage improvised weapon), and that he has 10 hit-points and we were ready to play.

We went from no characters, no ideas, to ready to play in less than an hour (including the time the GM spent explaining the setting and our individual situations).

It seems that our characters (and mine especially, given that I chose to create a character whose traits imply something of a brainiac) have become aware of our plight as the "slave labor" force to humankind and we have decided to try to organise some kind of revolt.

The assumed setting of "Zombie Apocalypse" was revealed to be, "Zombie Freedom Fighters" in a setting that seems very much to be like a post "Shawn of the Dead" world.

We began play by "escaping" from our various places of service/captivity to reconnoitre at a prearranged meeting place, the basement of a McDonald's. (Do McDonalds' even have basements?)

This one did, with convenient sewer tunnel access and was the place of employment of one of the other players, a zombie burger flipper who possessed Ninja like skills with spatula weapons and a weakness of "no thumbs."

The GM explained to the Ninja-Burger's player that because of his expertise with the spatulas he would not suffer any penalties while using them, but that other acts of manual dexterity would in fact fall under the umbrella of his debilitating thumblessness.

For the first game, it was just three player characters, and as we intersected with each other on our way to the agreed meeting place, we were spotted by security patrols who enforce a strict curfew forbidding zombies from being out alone after dark.

The last player was a Beauty-Queen turned zombie pleasure slave and of the three of us looked the least zombie like and the most like a normal human (although she is missing an eye - her weakness.)

She fastened collars on our necks to make us appear to be a wealthy human woman in the control of two zombie escorts, which might have worked except ... The patrol wasn't after us, they had spotted another lone zombie, a street hood zombie of some kind and proceeded to kick the tar out of the lone figure.

This, I decided, was just too much for my own character to bear, and I leapt into the fray, cane in hand, yelling, "Oppressors!"

The battle went well. The dice rolls seemed to work to create the right kind of odds, with the ratio of "hits to misses" feeling about like it would if we had been using a seasoned system like D&D.

The beauty-queen was badly injured however, and the GM had informed us that in this setting, the only way for we as zombies to recover from injury was through the consumption of human flesh. Beauty began snacking on one of the security guards, just as some pedestrians (children) came by and began screaming.

Adding to this, the GM informs us that we can hear "moaning" and it seems as though the other security guard is regaining consciousness. In a state of panic we flee the scene as quickly as possible ... by stealing the security guards' patrol car.

(Turns out the moaning wasn't from the downed security guard at all, but from the assaulted zombie laying helpless on the ground, that we now left behind as we fled the scene.)

We return to our perspective "homes" but, being without thumbs, Ninja is unable to remove the "leash" that Beauty had placed on him earlier, and we completely forgot about it.

Ninja's keepers are concerned that someone has attempted to steal their zombie burger chef and they investigate the possibility, discovering the sewer tunnels we've been using to move about.

Ninja is tethered for his own protection but escapes that night to try to rejoin us and report what has happened. In the process he triggers some new security and the chase is on again.

In the cliff-hanger ending of the evening, we are together lost in the sewer tunnels, with security teams approaching from two different directions.

It was, fun. It was exciting. 5x5's lack of rules proves to be liberating as we find that we have just enough structure to do what we need to do and a good framework for improvising the rest.

The action never slows down and the game system stays very nicely out of the way of the game play.

At the end I am concerned by the lopsided distribution of doubles and also with the scant amount. I make a mental note to look at 5x5's "Doubles equals Experience" mechanic with thoughts of replacing it somehow.

But, overall I am very pleased with 5x5's performance. And everyone has fun.

I will talk about the changes that I have made to the 5x5 rules (and why) and about our second zombie game session in my next post.