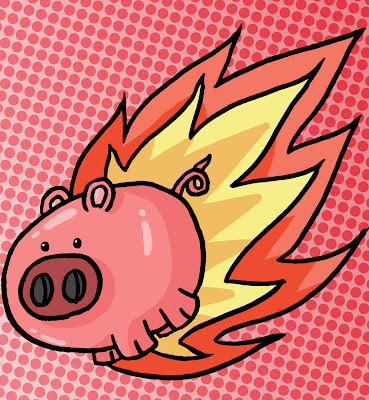 A group of 0-level non-adventurers have entered the BARROWMAZE to try to make their fortunes. I am using the Dungeon Crawl Classics Beta Test 0-Level character rules. In our first session a peasant sheep herder's dog protected the body of its fallen master, heroically destroying three skeletons after the adventuring party fled leaving the dog alone to its fate.

In this latest 4 hour game session my group restocked with some new 0-level replacement fodder including a 0-level Dwarf farmer with a pig. I should mention the sow was intended as "trade goods" but the player with the sow insisted on taking it along and lowering the poor creature into the Barrowmaze as a companion. Ultimately, I am okay with this kind of thing. If "piggers" gives the player some joy and a roleplay handle through which to connect to her character, who am I to argue?

The party managed to open one door in the Barrowmaze room 11/Q2 - a room with a deadly giant crab spider above the door that dropped on the first character inside. The spider combat was noisy and long and afterwards 3 characters were dead (this is okay the 0-level rules expect a high mortality.) The players argued among themselves as it was pointed out that the party had suffered as much if not more loss at the hands of a character on the players side, who insisted on throwing flasks of flaming oil into the melee.

And as the players fooled around: argued, searched the room for treasures, looked for secret doors, it came time to roll a random monster encounter. Six zombies on the way down the hallway.

The zombies were spotted by the look-out (the previously mentioned oil toting pyromaniac) who began chucking flaming oil at the approaching hoard. This gave another of the players an idea, who decided to grease up the dwarf farmer's pig (the dwarf farmer died fighting the spider) and send it squealing chaotically down the hallway. (In retrospect I should have ruled that these actions could simply not be accomplished in a reasonable amount of time, and wouldn't be realistic for use in this combat. But, I didn't think of that.)

The Dwarf's player still had three living 0-level characters and they took offense at the idea of using the deceased Dwarf farmer's pig as a suicide bomber. This incited new arguments. (I should mention that this kind of thing is actually pretty healthy around my game table, everyone gets along very well and heated discussions in character are generally enjoyed by all.) The problem was this was happening in the middle of a zombie attack.

The while the pyro kept throwing oil which did effectively slow the zombies down some, one of the players representing "Piggers" commenced to stab with a dagger another player's character who insisted on greasing the pig over objections. Lines were drawn and combat between players commenced. Zombie threat ignored.

Maybe I should have stepped up as the DM and stopped this ... but everyone playing is an adult over 30. We have all been playing together long enough to know better. If this is what they wanted to do ... I didn't stand in their way ... I just pressed forward with the zombies, now in melee range with the pyro.

One of the players decides that the rest of the party is crazy and decides to beat feet out of the dungeon, his four characters set out, but the path to freedom is covered in zombies and fire. So, they go the opposite direction deeper into the dungeon ... ??! Wha?

Before opening the spider room door (where the party has retreated) the party explored the neighboring room first because it was already open (door broken open, crypt defiled ... 11/D3) a phantom there scared the entire party who fled (all but one character) screaming back to the entrance. This was the first encounter of the night picking up after our first game session.

The player whose group had decided to leave had already forgotten about the phantom and waltzed right into that room. Saving Throws were failed and the exiting group ran screaming away from the phantom and head first into pyro and the zombies.

Now the zombie combat was on and players stopped fighting and joined the fray. And the pig was greased up and thrown into the zombies ... after which it promptly ran away (currently safe and sound in the entrance chamber with one abandoned sheep herders dog.) The flames had died down enough that they did not ignite "Piggers" and the entire grand scheme was for naught. The zombies were eventually defeated.

Regards from the Barrowmaze,