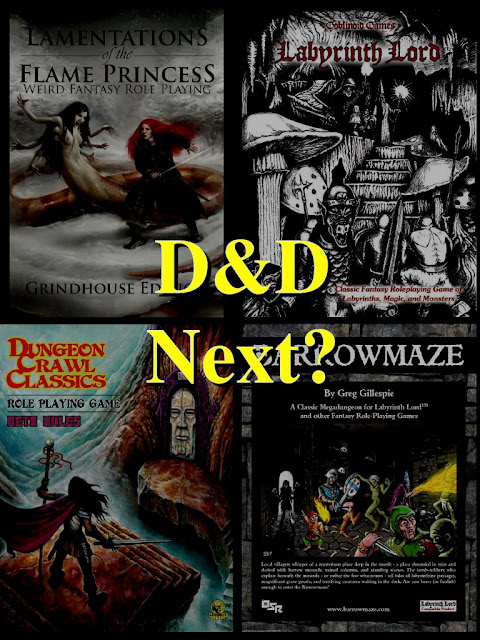 I am one of the lucky ones who gets to game. I have a group that meets once a week. We miss the occasional week due to conflicts but manage to meet fairly regularly. I am bad about consistency though. As a game lover there is always one more game I want to try. And this week I did it again, and started a new campaign.

I was reading on some other blogs about D&D and what Wizards of the Coast should do to make the game a better game … and in getting ready to run my latest game, which I want to be a dungeon crawl in the spirit of the D&D I played as a youth … I suddenly realize, “I don't care.”

What WoC/Hasbro does with D&D is nothing I need to worry about. The game that I knew and role-playing games like it will be around in one form or another. I am getting ready to start a classic style dungeon crawl, but using actual D&D rules never crossed my mind.

If you like Original D&D there's Labyrinth Lord, Dark Dungeons, and Swords and Wizardry

If you like 2nd Edition Myth and Magic looks promising.

If you like 4th Edition there's Descent: Journeys in the Dark.

(Okay, I jabbed a little fun at 4E there by comparing it to a board game, but that's how it makes me feel, and besides .... Descent is a great board game.)

Anyway, the point is … I never even considered D&D (as in actual D&D) as my go to choice when I decided to play “D&D.” And I don't have to. I will never miss it. The games I mention above are a fraction of what's available and many of them are available for free.

As it happens I am very fond right now of: Lamentations of the Flame Princess: Weird Fantasy Role-playing. And, I want an old school dungeon crawl, so I am running the Barrowmaze.

Now, I am using LotFP as my core rules set, (It simply uses the cleanest, easiest, most logically streamlined iteration of original D&D that I have seen.) but the other awesome thing about living in a world with so many choices is that I don't have to pick just one game to work from. Barrowmaze is written for use with Labyrinth Lord so I have that handy for the monsters.

Also, sometimes a game has good ideas that you just have to steal. Goodman Games' Dungeon Crawl Classics has a system for random character generation they call “the funnel” that I just had to try … and the game Thursday night was a blast!

Everyone had a great time. It was even pointed out that “the funnel” would be a great tool for introducing new players to the hobby. The funnel works like this: everyone generates a few random characters (we did 4 each). These are completely random 0 level characters. This is good for new players because they get to touch character generation without the need to understand or know the rules at all. Everything is random: 6 Random Attributes, 1 Random Occupation (that comes with a tiny bit of possessions) and you're done.

The trick is, each character begins with -100 XP and you throw them into the dungeon as they are and the hoard of neophyte 0-level peons all struggle to survive and come out with just a little treasure and enough experience to put them in the plus column. Fatality is high and dying is even fun. The dungeon is scary again for these “true noobies.” And if anyone of them makes it out alive with just 1 XP then the character can choose his class. And at this point, the player is invested!

Can you see how awesome this little gimmick is for getting new players started in the adventure? (The highlight of our game was a lucky little sheep herder's dog that single handedly destroyed the remains of three skeletons defending the body of its fallen master. I was just going to handwave the dog's death following the party's retreat, but the players wouldn't hear of it. And miraculously the little pup survived!) Amazing how fun survival is when fatality is so imminent.

“The funnel” allows players to play with no prior knowledge of the rules. It's an “on the job dungeon crawl training device” and a bit of brilliance from the Dungeon Crawls Classics Beta Test rules. I checked and the full game isn't out yet, but check it out when you can. It has some wonky ideas that I just can't see at my table, but that's the risk of being innovative … but it also has some great ideas crammed inside its pages, and the point I wanted to make when I started this post is that all these rules are adaptable and adoptable.

With all the OSR and similar material available “Modular D&D” or “D&D Next” already exists and I am playing it now!