The Supercrew by Tobias Radesäter 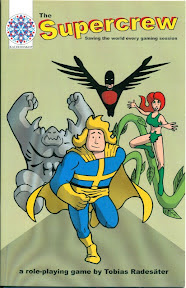 I really believe that good things come in small packages, especially where RPG rules/guidelines are concerned. If your rules are really so complex that they require volumes and volumes of documentation, I don't see them reaching my game table.

I am 47 years old and have been playing table-top RPG's since I was 15. When I was 15, I was driven by the desire to read more and more game material and the more I had, the more I wanted ... And by some miracle, I managed to remember every bit of it. And all my friends were just like me. I think it's the 15 year olds that drive the commercial RPG market. If I were 15 again, I am sure that Pathfinder's nearly 600 page core-rules and multiple tomes would excite me, and all my friends. But, these days, it's all I can do to remember a set of board game rules printed on the inside of a box lid ... And my friends ... They don't want to read or remember anything ... They just want to play.

For me and my group, games that are easy to read, easy to remember and easy to play are a boon ... More than that, they are a must. Where I might shudder at the sheer mass of Pathfinder, Labyrinth Lord is just right and contains everything I need, including the bestiary (another 300+ page volume for Pathfinder) in a comfortable 140 pages. Nice.

Labyrinth Lord isn't the only RPG taking advantage of the "less is more" philosophy of game design. Other recent purchases for me that have been blissfully concise include X-plorers by David Bezio (a mere 40 pages), Mutant Future (Goblinoid Games' take on the classic Gamma World RPG), and the wonderful Barbarians of Lemuria by Simon Washbourne.

The shining gem amongst all of my recent finds has to be, The Supercrew by Tobias Radesäter.

The game document comes in at 28 pages of fully illustrated panel art and story. It's a comic book. Yes, a comic book. And, although I have seen this convention attempted in the past, never has it been done as successfully as it's done here.

In the opening panel we see a group of players sitting around the table-top playing what appears to be a typical fantasy based RPG, probably THE ORIGINAL fantasy RPG. There is a reference to a "Ray of Frost" and multi-shaped polyhedrons are visible on the game table in the illustration.

The art is clean and friendly, sort of a cross between Bruce Timm's Batman and Hans Rey's illustrations of Curious George. Every page is in full color and even if you never play it, this tiny masterpiece will be a joy to own, to read and re-read like I do with my favorite comic books.

The story of the comic progresses quickly. An announcement of a crime in progress is heard from the radio, and suddenly all the players, except the GM jump from their seats ... They left their laundry in the washing machine! ... And, oh yeah ... While they're out, why not make a candy run? ... And, whoosh! The gaming group is gone, leaving a bewildered GM in their wake.

But they haven't really gone to pull wet laundry from the machine ... Oh, no! In reality, these seemingly mild-mannered gamer geeks are actually, The Bull Finch, Florosa, The Mastiff, and Captain Sweden: The Supercrew!

Here, the GM, now alone, begins speaking aloud to himself in a sort of theatrical style monologue. Breaking the fourth wall as it were, to address his audience, the comic reader, the GM describes a role-playing game that he has been thinking of where the players take the roles of gamers who become superheroes, "Saving the world every gaming session."

In this manner, the concepts of the game begin to unfold. The Supercrew comic isn't a reference manual for an RPG. It doesn't contain an index or a table of contents because it doesn't "present" its rules ... It teaches them. As you read the comic, you learn to play. (Assuming you already know how to play some of those other RPG's, which given the pretense of playing yourself as a gamer, The Supercrew does.) And by the time you reach the final page of the comic you will know how to play, and it is doubtful you will need to look back at the comic's pages at all, except for the simple joy of it.

I was able to teach the game to my players over beer and brats at the local pub the night we played. In practice the game and its mechanics performed excellently. The Supercrew is as fun at the table-top as it looks on the comic page.

The game uses the common and readily available 6 sided die, making it accessible to the most impoverished gamer (there's even what looks to be a very workable variation using playing cards over at The Fortress of Solid Rules - The unofficial Supercrew fansite. Character creation is quick and easy and the sort of thing a potential referee loves to see, because one thing about running a supers game is you will be required to make dozens of characters over the course of play. You will be able to crank these heroes and villains out in your sleep.

Every character has three powers. You can generate a general category for a power using a six-sided die to help guide you in your power creation and many examples are given, but there aren't lists of powers ... They aren't needed, or in fact, desired. Comics and their heroes cover such a broad spectrum that any attempt to define them in any finite way leads to headache inducing complexity. The very stuff I have been trying so hard to avoid. Superheroes shouldn't be bogged down by rules mechanics, they should be free to move as fast as the Flash or fly as high as Superman? How high is that, exactly? Who the hell cares?? It's Superman!

If you can imagine it, you can give it form in The Supercrew. If you say your hero can fly, then your hero can fly. It's not important how fast or how far. It only matters HOW you are able to use your power of flight to beat the bad guys, and that's up to you to describe. And, your description is made after you roll the dice, you make the narrative fit the outcome rather than try and force the outcome to match your narrative, which is always so much more difficult to do.

You need at least one success to accomplish anything. Each result of 4, 5 or 6 that you roll equates to one success. For each six that you roll, you add another die to your pool, potentially gaining more successes. Easy and I am sure I have seen its like before. It works, and it's fun. But, I can hear you thinking, "What keeps a player from using his best rank 3 power all the time and just ignoring the other two?"

Here's where we get to some of the brilliant bits of The Supercrew. You can't use your rank 3 power at all unless you spend a Hero Point. So, how do you get a Hero Point? Simple. You get a Hero Point every time you use your rank 1 power! So you will use all of your powers, even the ones that are the least likely to net a successful result. The game system asks you to struggle with success before you are able to achieve a spectacular result. That's not just a nifty game mechanic; that's good story telling.

When using your powers decide which rating of power you will use and roll the appropriate number of dice. The referee will do the same and so will the other players. After the dice are rolled, the player (including the referee) with the most successes goes first describing how the outcome demonstrated by the roll of the dice is realized in the narrative.

The Supercrew resists trying to define things mechanically as is done by a game system designed to simulate a specific effect, and instead encourages the player to participate in the creation of the story the way the writer and artist of a comic creates a story. This opens things up exponentially, and is something a game about superheroes needs to do, while the clever dice mechanic serves to keep everything in check.

Tricks provide additional options and layers, allowing for greater character definition. There are three tricks, each one usable once per game session. The specific nature of each trick and the power associated with its use is chosen at character creation. Tricks allow a player to change the outcome of the dice after they are rolled. One trick allows you to change one die to a 5 (making it a basic success.) One trick allows you to re-roll your dice outright. And, one trick allows you to change the effect of your roll (the number of successes you get) to 2. With the aid of tricks, a player can pretty much guarantee a success when they need it the most.

The comic includes lots of examples to help you understand how to make your character and determine what your character can do. In play everything moved, quickly and flawlessly and everyone had fun. I never had to look anything up, and I wasn't afraid to create a quick rule on the fly, because the system makes it easy for me to do. From a referee's standpoint the game is a joy to run.

Posted by Jeff Moore at 3:37 PM No comments: