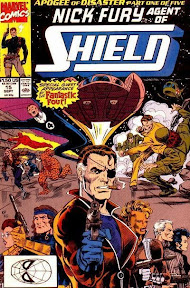 I am really excited to hear that Joss will be returning to television. I watched Buffy, and Angel, and Dollhouse, and Firefly religiously. I am a fan. The news that Joss is writing/directing a new TV pilot called SHIELD, based in the Avengers movie universe for ABC/Disney is pretty darned exciting!

But, I am trying to get my brain around what that is going to look like. You see, I am also a huge comic book fan and I keep waiting for television to take the plunge and "go spandex" as it were. Sure, I enjoy Alphas, and Heroes, and No Ordinary Family. But, where are the costumes? Why is television so afraid of the costumed superhero? Movies have done it successfully. There's Watchmen, and Kick-Ass, and X-men: First Class, and obviously the Avengers, to name a few. So, I know it can be done. But, I fear it isn't going to be ... That SHIELD is really just going to be another "cop/military/spy show" clone. A sort of NCIS/Homeland thing. Not, that I dislike these kinds of shows, just that TV has enough of them already. I want my costumed supers.

Still, one must have faith, and Joss has a knack for taking a genre and turning it on its ear. And, he's a comic book fan too. So, with that in mind, I try to imagine this new series in the best possible light. To my mind it should be sleek and sexy, part 1960's era Mission Impossible, part Sean Connery's James Bond, part Sucker Punch, with some Scott Pilgrim thrown in. Everyone involved would do well to watch X-Men: First Class to get some ideas about style.

I imagine that the show will have a few "super" agents along the lines of Black Widow and Hawkeye (as they were depicted in the Avengers movie they were more "agent" less "super.") These "supers" will walk along side some well trained "normals." An ensemble of 8 or 9 key players. I see a very isolated microverse where we get the SHIELD helicarrier and it's inhabitants separated from the world (very Dollhouse like) especially at first.

And to satiate the comic fan in me ... It should have super villains ... Real super villains, MODOK, Fin Fang Foom, Kang the Conquerer, Ultron, etc. I see Joss creating a TV comic book universe where normal people must battle the super fantastical every week ... Yeah! That could be cool.

And although my dream of having Joss relaunch Blake's 7 may never happen, I am pretty excited that the SyFy Channel is taking a look at bringing that show back!

Ahh, good times to be geek!