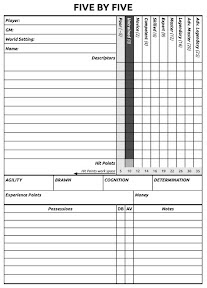 Since the completion of the Five by Five ver. 2 rulebook, a small number of rules changes have occured and are included with the new character sheet.

The new rules and other changes are:

Notice that at the top of the sheet where the various trait ranks are displayed, I have: "Poor -5."

People kept wanting to take traits like, "Sensitive to sunlight." This was not the intent of the Weak Trait. It is meant to convey a skill or ability that most take for granted, but that your character struggles with, like: "Cooking" if you can't boil water, or "Smooth Talker" for someone who always gets tongue tied.

This isn't new, just a clarification. In the rulebook I use 1/2 to describe a weak trait. I am not sure which manner of notation is best. I changed this to create some consistency in the way the numbers are presented. Neither notation is particularly intuitive.

The other ranks that need explanation are: "Advanced Master" and "Advanced Legendary."

I am playing with the idea of Advanced Traits. These are a special category of traits that can never be used "Untrained." It includes things like, "Brain Surgery," and "Fly Like a Bird."

My idea is that such traits always suffer a Rank Shift Penalty of -2. This pushes the "Untrained" version of such a trait off the chart (making it impossible) and makes the "Novice" version of the trait perform as "Poor." (Do you want to be operated on by a "novice" brain surgeon?)

The new columns are added to create room for advancing players to use their doubles to buy Advanced Skill Ranks at the Master and Legendary levels. The Advanced Skills need to be recorded at their actual level in order to track Doubles Costs appropriately, and then the Rank Shifts applied. Next, there are those boxes with the words: Agility, Brawn, Cognition, and Determination. I borrowed these from A+ Fantasy. For Five by Five, let's call them, "Talents."

One of my players was consistently bothered by the idea that all untrained tasks default to the same baseline for every person. He wanted a more broad reflection of natural affinities like: intelligence, strength, or dexterity.

I had left these out of Five by Five intentionally in the interest of keeping things simple and streamlined, but finally, I relented.

Talents have one word descriptors that determine how they are used.

Challenged - You have trouble with all tasks related to this particular talent. You can notate a "Challenged" talent by placing a subtraction sign ( - ) in the box for that talent.

Normal - Just like any other average person, you are not particularly good or bad at things related to this talent. You don't do anything to notate a "Normal" talent. Just leave the box empty.

Gifted - You are good with all tasks related to this talent. You can notate a "Gifted" talent by placing an addition sign ( + ) in the box for that talent.

By default, everyone is considered to be normal and these boxes are empty.

Just ignore the boxes if you aren't going to use the optional talent rules and everything works just as written in the rulebook.

If you do want to use talents in your game, they work like this:

In order to have a Gifted Talent you must also take a Challenged Talent.

For any task related to a Gifted Talent you get a +1 positive rank shift.

For any task related to a Challenged Talent you get a -1 negative rank shift.

That's it for talents.

If you use these rules, you must always consider which talent a task is based upon before rolling a 5x5 action check. Using the rules for talents, not every untrained person will perform every task the same.

Finally, the character sheet shows Experience Points rather than Doubles ... I am considering moving away from Doubles and using Experience points instead. Use whichever you like and keep track of it in this space.

If you want to continue to use Doubles, consider your group's style of play. A group that fights numerous combats in a session will acquire a much higher number of Doubles, than a group that spends a lot of time role-playing. Also, longer sessions will produce higher numbers of Doubles than shorter sessions.

The Doubles requirements for character improvement listed in the rulebook are the result of playtests set in a superhero universe. This style of play was very combat intensive. Since recording these results I have found that other styles of play that are less combat oriented produce much smaller numbers of Doubles.

If you use Doubles your referee will want to adjust the Doubles requirements so that an average session will produce enough Doubles for a player to raise an "Untraned" trait up one notch to "Novice" after one or two game sessions. (The superhero playtest that I ran averaged 15 to 30 doubles per player each game.)

If you want to change to an Experience Point based model, the referee can simply award 15 to 30 experience points to each player following an average game session.

And ... That's the Five by Five character sheet.