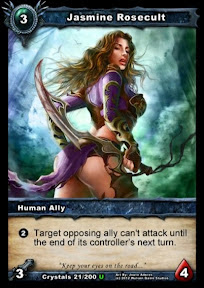 I have written more than one entry in the past promoting free RPG's that you can print and play at your tabletop with your friends, but I don't believe I have ever talked about free-to-play computer games.

I am of mixed-emotions when it comes to micro-transaction driven MMORPG's ... I used to play City of Heroes, but had to stop because I simply didn't play enough to justify the expense. You would think that the free-to-play micro-transaction model would have been the perfect solution. But, I tried it ... And the game had lost something for me ... It just didn't feel "right" somehow. I certainly emphasized with Codex when she found herself fighting to save "her" game from the doom that is the micro-transaction and *gasp* "Apps!" in this past season of "The Guild."

Anyway, when it comes to things like this, I tend to be "dubious" at best. There is a fine line to be walked here. The producers of a game need to entice you as a player into spending a little something or they won't be able to stay in business. At the same time, the "free" experience has to be rich and full enough that players are excited to play the game without feeling that they are "cheating" themselves somehow by not spending money on the game.

There's a kind of "beggars can't be choosers" stigma behind "free to play games," I think. But, if I feel like the free game play experience is designed as nothing more than an advertisement for the "full version" of a game, I feel gypped. It would be like watching broadcast television (remember that?) where it showed nothing but infomercials ... Hmmm ... isn't that what happened to broadcast television? Some things in our world are just wrong. Shadow Era isn't one of them.

Shadow Era is a collectable trading card game. The game is making it's "physical" debut (real cards made of paper and ink) at GenCon Indy right now. So, it seems like a great time for this post. This is a review of the electronic version of the trading card game. I have played it on the iPad and on Windows PC. I have friends who play with their Android phones and tablets. The diversity of platforms that the game supports is a real boon, and I have managed to talk a handful of my friends into playing the game with me.

The game is a lot like Magic the Gathering and games of that ilk and doesn't do anything terribly new. This, to me isn't necessarily a bad thing. If you are familiar with games of this type, you will have no trouble learning Shadow Era. I hadn't played Magic since its 4th Edition, but I felt at home with Shadow Era in no time.

When you sign up for the game (A wonderfully painless process of entering an email address and choosing a password - no waiting; you are playing instantly ... This alone scores high marks with me!) you're given a free starter deck and asked to choose a "Hero." The Hero that you choose determines what sorts and combinations of cards you'll be able to play.

For my first Hero, I chose a Priest, and I got some cards that allowed my Hero to heal herself or her allies. Healing is a Priest ABILITY card. Only a Priest Hero deck can be built to include such a card. I also had Human Ability cards like, "Campfire Stories" that healed all of my allies a little and let me draw a card. And Neutral Ability cards like "Rain Delay" that keeps all allies from fighting for a turn in the hopes that you might draw just the card you need.

In Shadow Era each Hero will belong to one of two factions: Human (which you can think of as the side of 'Light') and Shadow (which one might think of as the side of 'Darkness'.) In the example above I mention abilities related to faction and abilities that are neutral. My Hero is part of the Human faction so she can use Human Abilities to build her deck. She can't include Shadow Abilities in her deck. A hero of either faction can use Neutral Abilities.

Your starter deck will have cards in it that are made just for your hero and you will start playing the game immediately. The help text/tutorial is actually helpful as you play your first games and I had a grasp of things after a game or two.

You can play online with your friends or with random players seeded to play against you based upon your skill and experience. But ...not immediately. Your starter deck is 30 cards, but it requires 40 cards to play online. Now you could hit the in game store and buy more cards immediately with real money, but I wouldn't recommend it.

The game gives experience as you play against the computer. When you level up you earn crystals. In a few levels you have enough "crystals" to get a booster pack or another starter. You can earn those extra 10 cards in no time, and while you're at it, you are learning to play the game and your deck. Personally, I think making players play the game against the computer for a bit before letting them jump into the competitiveness of the online experience is very wise.

The in game rewards that allow you to earn more cards are very fair. I was able to tweak and fine tune my Priest Deck into exactly what I wanted without spending a penny, and I never felt frustrated through the process. Now, that said, I also want to try a Rogue Deck, and a Warrior Deck, and a Hunter Deck, and a Mage Deck. Ah, well ... That's a lot of cards, and if I want to do that, I'm going to have to invest some real cash ... Or play ... A LOT. Fortunately, the crystals that you trade for booster packs are very reasonably priced.

The developers have balanced the free vs. pay pendulum perfectly. And, did I mention the game is fun?

As an RPG Gamer, I love the idea of a deck strategy that is built around a Hero and their Allies. I read somewhere that Shadow Era is very much like the World of Warcraft collectible card game in this regard. I have never played the WoW card game, but the comparison seems logical.

Your starter deck is like a pre-gen character you get to start adventuring. As your character gains experience and you learn the game, you begin to want to create your own character. Building a deck for Shadow Era is a lot like creating that character.

There are 5 kinds of cards in Shadow Era:

The Hero - Every deck has just one of these. The Hero is the foundation around which the entire deck is built.

Allies - these are minor supporting characters, they have their own attack and health totals, and most have special abilities. All Allies are connected to a faction, either Human Allies or Shadow Allies.

Abilities - I mentioned these earlier. These are things that your Hero can do. They tend to be used once and then gone, unlike allies who stick around until they are killed in battle or eliminated some other way. There is a special category of ability called an attachment that hooks onto a Hero or Ally and helps them out in some way. These tend to stick around until your opponent is able to use a counter ability to get rid of them.

Items - There are three types of items, Weapons, Armor, and Artifacts. Weapons and Armor have limited durability and will wear out after a few uses. Artifacts can stick around a long time if your opponent doesn't have an Ability card to play that can get rid of them. Weapons and Armor are equipped by your Hero. Without a weapon your Hero can't attack and must expend abilities to damage his opponent's Hero and her Allies.

Between Item Durability, and Ally Health, and Hero Health, and Shadow Points, (Oops ... knew I forgot something!) Shadow Era requires an awful lot of bookkeeping. Fortunately, bookkeeping is something computers handle easily, and while playing on my iPad, everything happens naturally, and I don't really have to think about it. I will be curious to see how the printed physical version of the card game fairs.

Above, I mention: Shadow Points. There is one final layer of strategy to consider when you choose your Hero. Every Hero has a Shadow Ability (even the Human ones!) and this ability can really have an effect on the game. My Priest Hero has the ability to Heal an Ally for 3 Health, at the cost of 3 Shadow Points.

Shadow Points are the currency for Hero special powers. Every turn your Shadow Point total increases by 1, but using your Hero's Shadow Ability diminishes this total, and the points have to build up in order for you to use your Shadow Ability again. The other cards in your deck also have a 'cost' for play. As you play, you can assign one card each turn as a 'resource.' This card is lost as an Ally, Item or Ability, but it can now be used to 'pay' for other cards, allowing you to bring them into play.

Unlike Shadow Points, Resource Cards aren't expended when you use them, they stick around to be used again and again. As long as you continue to 'sacrifice' a card to your Resource pile, your available resources will grow, 1 Resource in the first turn, 2 in the second, 3 in the third and so on. Most cards cost between 2 and 5 resources to play. There is a real strategy in choosing which cards you can sacrifice and which cards you need to hold onto so you can play them.

Game play has been designed from the ground up for online. On your turn only you are able to act and the same for your opponent. There are no 'interrupts' and when playing online against other real people you have a time constraint. This panicked me in my first few games, but it's really plenty of time, while still making certain each match moves along at a healthy pace. This is also another good reason to spend that time playing against the computer. The computer games will pause for you indefinitely allowing you to read the text of every card for as long as you might need to understand them.

The cards are gorgeous ... Really beautiful ... And the latest release includes digital foils of common cards that are just spectacular! Anyway ... If you enjoy trading card games and get the chance ... Check out: Shadow Era. You'll be glad you did!