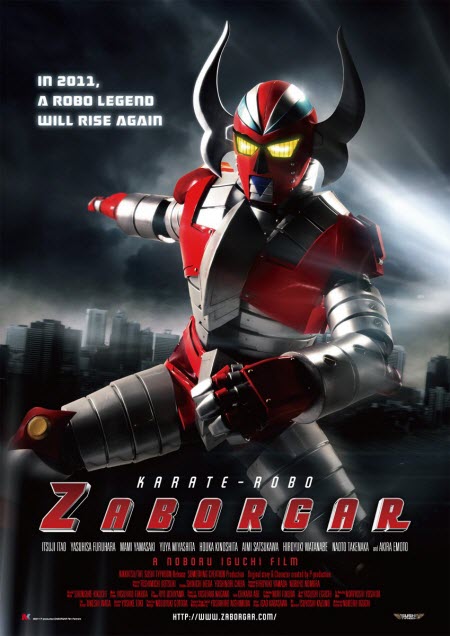 I haven't seen a lot of Japanese cinema, but I am a huge Godzilla fan and have fond memories of watching Johnny Sokko in syndication when I was about 8 years old. I am also a huge comic book fan (an art form I fear may be dying in our computer age.) The success and quality of movies like the Avengers and X-men First Class fill me with hope that comics will persevere.

I have recently begun to explore Japanese movies and anime with new eyes and I am really enjoying what I see. I mentioned in the recent posts about the story-telling game I have been trying to design that I wanted to use an anime inspired setting (at least I think I did.) I think it's because the shows I have been watching have stirred the imagination of my youth like nothing else has in a long time. Case in point: Karate-Robo Zaborgar.

I don't really write reviews of things when I write this kind of thing. I am not sure I understand the proper way to structure and write an objective review. I write about what I like. And I really like: Karate-Robo Zaborgar. I watched this on Netflix, so if you have that service, then you have no reason to wait. Give this movie a quick look. If you can somehow pull yourself away after watching through to the opening credits then your joyful child's heart is buried deeper than mine.

Some very rudimentary research tells me this movie is a spoof of a Japanese child's action TV show from the 70's. One example compared the treatment this show receives to that of the Brady Bunch movie. I think that's probably a fair comparison, and this movie is funny in a "I can't believe what I am seeing" kind of way. Karate-Robo Zaborgar is a ridiculous farce that oozes with such a sense of love and heart that it rises above the sum of its parts into something grand.

When I added the movie to my queue I expected to be treated by something "so bad ... it's good." Karate-Robo Zaborgar was so much worse and so much better than I expected. I am reminded of my friend Jon's one sentence review of "Galaxy Quest" which I believe fits here as well, "Way better than it should have been."

Galaxy Quest might be a better movie to compare Zaborgar to than the Brady Bunch. As a spoof of Star Trek, Galaxy Quest managed to create a heart and spirit all its own, and it succeeds as an action comedy that transcends the material inspiring it. I have said more than once that, "Galaxy Quest is my favorite Star Trek movie." So, too: Karate-Robo Zaborgar may be my favorite Japanese superhero robot movie. (Not that I have seen a lot, besides Johnny Sokko, only "Infra-man" comes to mind, and I believe that is also a spoof and a Chinese one at that, not Japanese at all.)

If you have Netflix (or I think Amazon Prime) give Karate-Robo Zaborgar a look. It provided me with the most fun I've had watching a movie since the Avengers (a comparison that if you know me, is no small amount of praise.) I plan to seek the movie out on Blu-Ray and make it a permanent part of my personal collection.