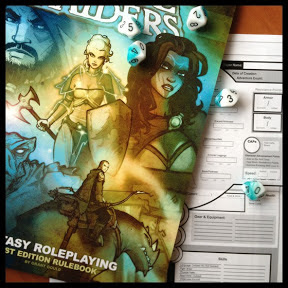 So, I just made an account on Twitter: @jeffwmoore ... I know ... not been one to keep up with the times. However, I have been watching some of the web-shows on Geek & Sundry. Mostly Table Top and recently On the Table.

Well, On the Table's Season 5 Premier (which is months old now ... again ... behind the times) made prominent mention of an upcoming RPG that really caught my interest: Blade Raiders.

So, I did a Google search and found a blogspot link that talked about the game ... Huzzah!

Awesome! I read more about the game and became really excited. Wow! A blogsite sidebar with a picture of the game said, "Expected release dates: Blade Raiders rulebook (Feb. 2013)" ... Feb. 2013! That's now!! My geeky excitement nearly caused me to rupture a spleen. But with only a few days left in the month and the last blog post dated February 5th how could I find out when the game would come out for sure?! I didn't want to miss it!!

And being a Twitter Tweater for all of 2 days has really paid off! I got to be there for the announcement of International Table Top Day! Which I totally plan to support! I recently reviewed a few table top board games which it would be awesome to play again! Or given the connection between my learning of International Table Top Day to the game Blade Raiders, maybe I will run that game. If it's out by then.

Are you planning on playing on International Table Top Day, Saturday, March 30th, 2013?! Post a reply and let me know!