This is a guest post from someone who plays Five by Five. It's some house rules that he is using in his fantasy based campain!

Have you written some Five by Five house rules or other materials that you would like to share? Send me an email. I will be happy to share them!!

Hi my name is Matt. I am a big fan of 5x5 and so I asked Jeff nicely and he agreed to let me put this post up on the 5x5 page. I have rewritten this post about 100 times and keep editorialising about a trend in RPGs for increased complexity that reduces utility and that the most valuable design writing around right now is in the video game space. You can harangue me about being a shameless promoter or about any other truth for that matter at http://quicktimevent.blogspot.com.au/.

Instead I decided to give something back. I have added a challenge based reward system for 5x5 that I use in my Drakkeil campaign. It works like this:

Whenever a player rolls doubles they score a point of Karma (I call it Fate). They can also choose to escalate the Doubles fail to a severe fail. I am a fan of the `fail forward’ school of GMing so in normal play a fail means the player does not immediately achieve the objective as planned. They probably still get something pretty close to the intended result. A severe fail means that it does not succeed in any way of all. The trade off is that they get to roll on the nifty CHALLENGE CHART! 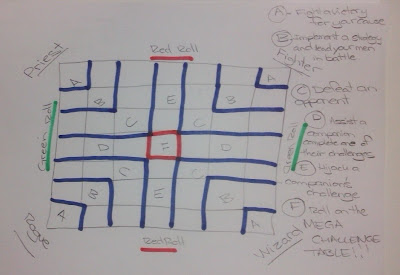 I am playing a Fighter (top right) and I get to roll for a Challenge. (Note that this chart is only filled out for Fighter- time is my enemy). The player starts by deciding if they want a brief, moderate or extended challenge (rated 1,2 or 3 points).

I roll 2d6 with a red and green die, counting that number of points from the fighter corner. See that the Fighter has an A, B and C challenge, there is a border D and E Challenge and in the middle is the fearsome F Challenge. If he rolls high enough he will cross over into the B or C Challenge for the Wizard or Priest.

If the Player rolls Doubles, roll 1d6 and add this to the Challenge Score. Any Challenge of 4 or more is prolonged).

For example: I roll R4G6. This is result E: Hijack a companions Challenge. Part of emulating D&D is encoding rewards for players being dicks to other players. The GM notifies the Player about a Challenge one of the other Player has accepted. If they complete it first they will get the points.

Another example; R2G2 (not the droids you are looking for), result B. This is doubles so +1d6 is added to the challenge rating. “Implement a strategy and lead your men in battle.” This will probably be a prolonged challenge. The GM can think about this and provide the player with an opportunity to plan, prepare and embark on an epic battle, leading minions to arms. This could be a earth shattering war or a skirmish by a lake, it is up to the GM.

Challenges give the Players clearly defined goals and associated rewards.

I hope this Challenge Chart inspires you to take on 5x5 and use it to emulate the stories and style that you want to play.