My Problem with MOS's Ending

I know this has probably been talked to death ... but, I posted this as a comment over at Siskoid's Blog of Geekery and I thought it was worth sharing here. 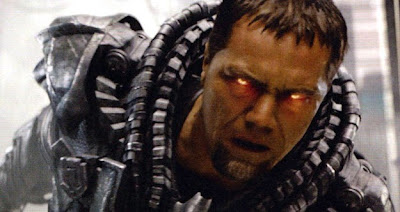 I want to comment on the whole "Zod" controversy. I think taking the hard line, "Superman doesn't kill, ever!" standpoint, isn't really looking at the issue.

If backed into a corner where the only hope that Clark can perceive is the course that he chose, then he made the hard choice ... and that's a character defining moment.

When someone acts against character because circumstances demand it, that's powerful stuff. Here's my problem with it, and it has nothing to do with Clark taking a life.

The pinnacle moment where Clark breaks Zod's neck, was I think, meant to be this huge character moment of sacrifice for the greater good. Like Spock's self sacrifice in the Wrath of Khan.

Taking a life, no matter how justified is something that should haunt a man like Clark forever. This is as much a self-sacrifice as Spock's as far as I am concerned. That moment could have been powerful drama.

Zod should have been a sympathetic character. He was a soldier trying to save his race. He saw himself as a hero. We should have seen some of this too. Zod's character isn't sufficiently developed.

Clark should have been shown as a heroic figure. Someone who values life and protects it above all else.

I think the film knows what it needs to do. It just doesn't seem to understand how to get there. I am not sure if that'a a problem with the script or the direction, or if it's a symptom of how these films are made and how so many different voices have a stake in the final outcome.

Zod has a few sympathetic moments ... almost. He tells us he's sympathetic at least. Clark saves some people from a fire, but it doesn't feel heroic to me. It just seems to be something that happens because Clark happens to be there. If I had super powers I would probably do the same. Not because I am heroic, but because I was there and helping out really didn't cost me anything.

Back to the Zod thing. Because the characters of Clark and Zod were not sufficiently developed or connected, the tragedy of the sacrifice is lost. All we have left is the "shock."

Unfortunately, because of the action-movie quick take editorial approach of the entire film and the exhausting endless barrage of numbing action at the end ... I am not sure even the "shock" is as powerful as it could have been. Speaking for myself, I was just happy the movie finally seemed to be wrapping up.

For me, for these reasons, the ending was an epic fail. If you take out the "Superman never kills." argument and make this about a completely new world of characters. Characters whose only existence is within the context of this movie. The ending still fails.

And that's a problem.