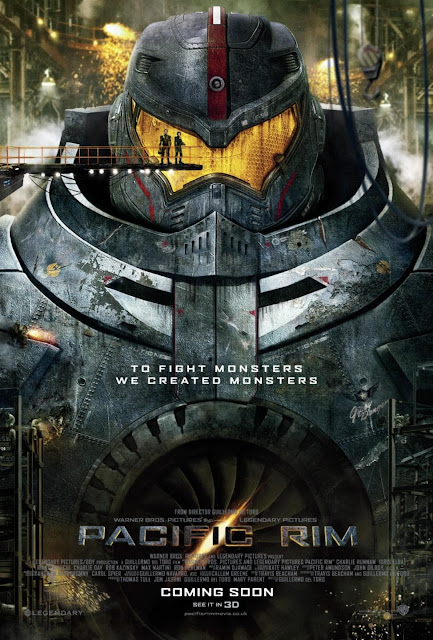 I went to see Pacific Rim for my birthday. It was a good movie. It does have a few problems and it didn't reach the kid inside as much as I had hoped that it might ... but it was good.

The film is exactly what it advertises ... Giant Robots fighting Giant Monsters. It's there. It's presented competently and with much spectacle. So, why am I not turning cart wheels of joy? I honestly don't know. Maybe it's me. Maybe I need to go see the movie again.

The movie dumps us right into the middle of the action and doesn't let up. That said, time is made for some good character moments, and the movie avoids the mind-numbingly repetitive action sequences that plagued Man of Steel. All the action is fresh and interesting and manages to provide a few surprises.

But the action was all soooo serious. These monsters were more scary than fun, and the robots were more realistic than awesome. The character played by Ron Perlman (Hell Boy and Sons of Anarchy) as well as the scientists played by Burn Gorman (Torchwood) and Charlie Day (It's Always Sunny in Philadelphia) are presented with a bit of campy tongue-in-cheek spirit meant to lighten the film, but everything else was so serious that these characters seemed out of place.

I think the problem for me is that everything in Pacific Rim is done in a sort of Matter of Fact / Status Quo fashion. This serves the film's momentum well, losing no time is immersing us in the world, but it robs us of some of the sense of wonder and discovery. I felt like I was watching the third movie in a trilogy and that I had missed the other two.

I think that we have come to take some of the "spectacle" that film is able to give us in today's computer age for granted. It's become so common place that the film makers assume that we "expect" it. So, there's no need to take the time to ease us into it ... there was no "reveal" ... no sense of wonder shared through the eyes of the characters. The robots and monsters were there and in your face and the characters had been living in this world for awhile, so they didn't need to bring us into this reality and take the time to allow us to feel what should have been giddy kid-like joy.

Oh, it was take your breath away spectacular ... for me, especially the giant robots that seemed to have genuine weight behind their stature. They were awesome  I just wish I could have gotten that sense of wonder through an empathic character connection. Like you get the first time Rose steps into the TARDIS on Doctor Who. I know that the TARDIS is bigger on the inside ... I know what to expect ... I have seen the inside of the TARDIS thousands of times ... but that didn't diminish the shared feeling of awe that I got when the reveal happens and we get to see the TARDIS through Rose's eyes for the first time.

I think they tried to do some of this when Becket is shown the robots upon his return to the resistance after having been away for five years. It was there ... but it was more like finding an Easter egg than coming down to a tree full of presents on Christmas morning. This world is spectacular ... I wish that the main character had thought so. Farscape works ... Doctor Who works ... because normal people are brought into fantastic worlds and we get to see these worlds through their eyes. I wanted a little of this.

My favorite scene was the one where the monster is chasing the little girl, because I was finally able to connect with something emotionally ... first her fear ... and then when the robot ranger guy removes his helmet as her savior I felt that little girl's wonder and admiration. This was the connection to reality I needed ... and it was in a dream sequence ... LOL! Like I said, I want to see part 1 of this trilogy.

I liked Pacific Rim ... it was epic ... and it was monsters vs. robots ... what more could you ask for? Well, for me ... I would ask for a better human connection not between the characters and the audience, which was missing in MOS, but between the characters and their world. Also, if I really want to nit-pick, there were things that just didn't make sense. These would have been more forgivable if I had gotten the connection I was hoping for. As it is, these things all happen right at the end of the movie and so cause me to scratch my head as I am walking out of the theater ... not a good final impression.

How was the "clone" monster, that was manufactured for war, pregnant? Was this some kind of failed attempt to poke fun at the American Godzilla movie? How were they able to maintain radio communication on the other side of the portal? How did the escape pods make it back through the portal? Was the DNA lock only one way? Perhaps the portal had simply stayed open the whole time. If so, why didn't they tell us that? It seems completely unrealistic that both Becket and Mako made it out alive. Their inexplicable survival for me diminished the impact of the sacrifice of the father and son Australian team that blew themselves up. These were all little things that troubled my brain as I walked out of the theater.

Anyway ... I do want to see it again. It was fresh and original. It was wondrous and amazing. It was even a little bit fun. I'm just not sure that it was fun enough to get an A ... so, I give Pacific Rim an A- for almost getting it right and for trying damn hard.