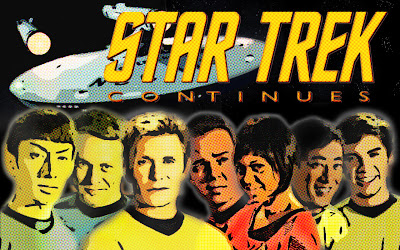 This is nothing short of fantastic. The actor playing Scotty is remarkable and looks so much like the original Scotty because it is James Doohan's son Chris Doohan in the role. The cast list can be found here.

Chris Doohan's performance is flawless, he is Scotty on screen. I find myself wishing it had been him and not Simon Pegg who had taken the role to the big screen. There were other standouts as well. I loved Kim Stinger as Uhura. She was my favorite of the cast, giving a performance that was not an imitation of Nichelle Nichols, but a faithful and original interpretation of her character.

Vic Mignogna as Kirk grew on me. What at first seemed to be a parody of William Shatner became for me a genuine representation of James T. Kirk by the end. You can tell this is a labor of love, and that everyone involved is a fan of the original series.

The production value is amazing and I really loved this. God, I LOVED the space suits they wore for going outside the ship. All the costumes and classic hairstyles were perfect.
The story involves Apollo (of Greek myth) who appeared in the original series episode "Who Mourns for Adonais." Michael Forest returns to play Apollo, but aged 45+ years since their last encounter, a direct result of the action of Kirk and his crew. The story is smart and interesting and well presented.
The presentation both visually and audibly is nothing short of perfection. The use of the original series incidental music, and the pacing of the story, including cliffhanger pauses in the action for "commercial breaks," makes this feel exactly like an episode of the original series.
This production is a master piece. And it's fun. From Kirk's chauvinistically casual dismissal of the new female doctor, (Dr. McKennah played delightfully by Michele Specht) to her later appearance in his quarters, when she barges in on him and Kirk is (of course) sans his shirt. The production successfully pokes fun at itself without becoming a parody. And it also has genuine charm. The moment when Uhura realizes that her singing ability has just been praised by the Greek God of Music is especially memorable.
I can't say enough, how much I loved this. I loved this.
Give the show a look. And your support. From the website:

"Of course, this production makes no money from their efforts as required by the copyright owners CBS/Paramount. But the sheer love they have for Trek shows in everything from the writing, directing and all the way to the rolling credits."

So, support them by watching the webisodes, visiting the website, and spreading the word.

The plan is to make an entire 4th and 5th season. I wish them all the best and plan to be along for the ride.
Live Long and Prosper.
Jeff Moore