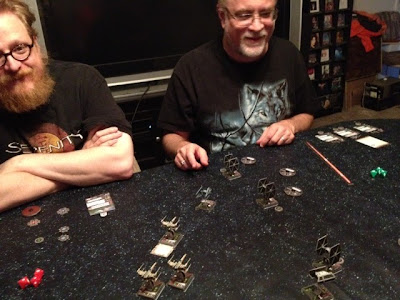 Above Picture: "Old men playing X-Wing." I am the old man on the left in the Serenity t-shirt. My friend Greg is seated next to me. We are playing Fantasy Flight's, X-Wing miniatures battle game. I was controlling X-Wings and Greg was controlling TIE Fighters.

This game was a lot of fun. The game components are beautiful. The pre-painted plastic ships are the best I've seen. In the picture you will see several X-Wings and TIE fighters. We played with two Starter Sets and several expansion ships.

A starter set comes with only 1 X-Wing and 2 TIE Fighters. It also has some dice and various cardboard components. As I mentioned, all the components are of good quality. Even so, I wince a little at the $40 price tag for a game that contains only 3 ships. The expansion packs contain 1 ship and matching components for that ship for $15. It's an expensive game. Or maybe I'm just getting old.

Expense aside, the game has a number of brilliant bits. Each ship includes a movement dial which shows the legal moves for that ship. The moves on the dial are matched by card board movement guides which work wonderfully to measure movement without the need for a grid. I really liked the movement dial / movement tile mechanic. 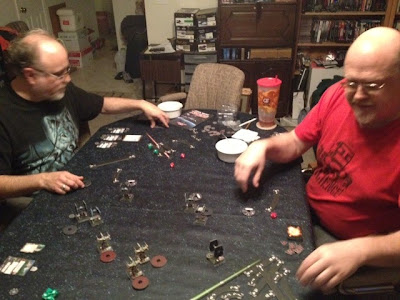 Here Greg and Roger (red robot t-shirt on right) plan TIE fighter movement. You can see the little round disks (movement dials) face down behind the ships here. Also next to Roger's left hand are a bunch of the Movement tiles. Next to Greg's left and Roger's right hand are bowls of ice-cream (not included with the game.)

To move your ships you select your movement choice on the movement dial and then place it face down beside your ship. When its time to act, the worst pilots move their ships first and the best pilot moves his ship last. You are committed to your movement and can't change it so ships often end up in places you weren't expecting, and you have to try hard to anticipate the movement of your enemy. This is a fun strategic element and one of the best things about the game.

After a ship moves you can choose an "action" for that ship, which is something that can give you an advantage later on. One example is an action that puts your pilot on alert and turns "eyeballs" rolled on the special combat dice into either successful "hits" or "evades" as appropriate. If your pilot isn't on alert the "eyeballs" do nothing.

It was explained to me that the rule that allows a skilled pilot to move after the lesser skilled pilots is actually an advantage for the better pilots, but I am not sure how much so. Supposedly, because they can see how everything is playing out before choosing their action. But, our game at least seemed to keep everyone in pretty close proximity which resulted in more than a few "near collisions" and if someone else has moved into the space that you wanted to go, they get there and you are forced to stop short (no stacking ships in the same space.)

If you are forced to stop short (ending a move base to base with another ship) you lose your chance to choose an action. So getting to pick your action last loses its appeal when that action becomes no action at all. This happened a few times. It made me question the logic of the "best pilot moves last" rule, but really it didn't ruin the fun.

I wonder if the "best pilot moves last" rule was something written before they had the movement dials and plotted movement that all happens in secret. If you could choose your movement after you see where the other ships have gone, this would be a definite advantage.

After movement and selecting actions comes shooting. Now shooting allows the best pilots to shoot first. Except that if you were forced to stop short to avoid collision and are base to base with a ship, you can't shoot at each other ... but you can target other ships if they are within range of your firing arc. Again, a nifty cardboard range tile allows you to determine the range of a shot. Close range grants the attacker an extra die, while far range grants the defender an extra die.

The combat dice remind me a bit of Hero Quest. There are little explosion symbols to represent "hits," the "eyeballs" that I mentioned earlier, and some "blanks". The dice are D8 and I think the distribution was 2 blanks, 2 eyeballs, 4 hits ... with one of those hits being a special critical hit. The Defense dice have 3 evades that turn a hit into a miss, 2 eyeballs, and 3 blanks. The opposed rolls work well. Your ship description tells you how many dice to roll for attack and defense and it's super easy to play.

If your ship is hit you might lose a shield (being required to discard a shield token) or if your shields are gone you might take damage (requiring you to take a damage card.) The damage cards have critical effects on the flip side which add some variety to damage and allow the damage tokens to pull double duty. You suffer critical effects when that special critical hit symbol on the attack dice damages your ship. Evades on the defense dice must eliminate the normal hits first, so crits will happen often enough to keep things interesting.

The ships all have predefined point values and the X-Wings are more expensive then the TIE fighters. Our scenario saw 6 TIES vs 3 X-Wings and ultimately the superior numbers proved to be too much for the X-Wings. Multiple TIE Fighters were able to target a single X-Wing more often than the opposite was true and this advantage won the day for the evil Empire.

The nature of the plotted movement made coordinated attacks on a single target more difficult and the damage ended up being all spread out. Maybe this is more due to the inexperience of those playing the game, but it felt like the nature of the beast here. Ultimately, 5 TIES stood against 1 X-Wing with all ships only 1 hit away from destruction.

The rebels admitted defeat and a good time was had by all. I like this game. I don't know if I like it well enough to justify spending the big bucks on it ... especially when my friends are already doing that for me. As a collectible game, the ships are awesome, the components are solid and the game play is fast and enjoyable.

Email ThisBlogThis!Share to TwitterShare to FacebookShare to Pinterest
Labels: Board Games, Star Wars