On father's day I went to see, Man of Steel. It isn't a good movie. It's a frustrating example of a product of the Hollywood Machine. 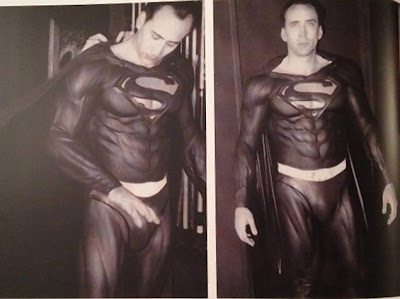 In the mid 90's a potential Superman film called "Superman Lives" was under discussion. Tim Burton was to direct and Nicholas Cage was to play the man of steel.

This is Kevin Smith talking about working on a draft for the script for Superman Lives. This is really worth watching. It's told a bit tongue in cheek as Smith is want to do as an entertainer ... but, it gives a rather distressing look inside the mind of Hollywood.
It's a small wonder that Man of Steel is the film that it is, and I have gained new respect for Joss Whedon's fantastic accomplishment in the final product of the Avengers. With this kind of thing happening behind the scenes in Hollywood it's amazing that we ever get a movie worth watching.
Regards,
Jeff Moore
Posted by Jeff Moore at 1:31 PM