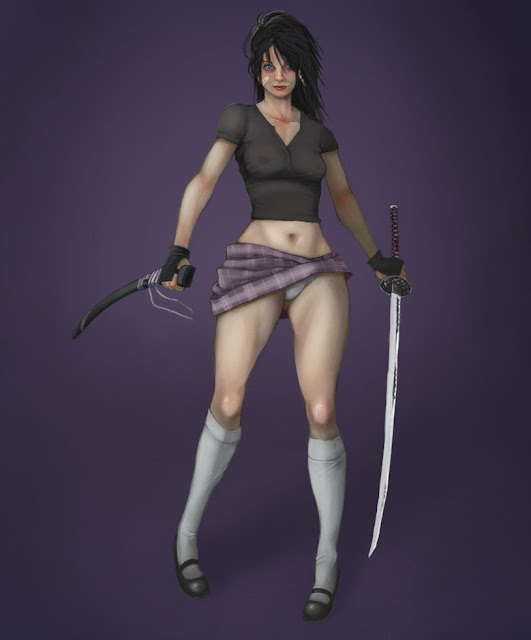 Jaax (Catholic Schoolgirl Samurai Warrior)
Attack: Expert Samurai Sword (6)
Weapon: Medium Samurai Sword (10) - Duh!
Armor: Unequipped tattered Schoolgirl Uniform (0)
Preferred Combat Style: All out attack - using sword two handed, weapon becomes: Heavy Samurai Sword (12)
Traits:
Expert Samurai Sword, Attack (6)
Adept Upskirt Distraction (with cute teddy bear face on panties,) Defend (5)
Journeyman Seduction (4)
Apprentice God's chosen warrior, Interrupt (3)
Novice Shuriken, ranged attack (2)
Trouble Driving motorized vehicles (Doubles)
Jaax is a Five by Five character for my new Planet Motherfucker campaign.
I considered editing "Motherfucker" above as "Motherf**ker" but decided that was silly. Tim Minchin talks about how the London Times got away with using the word "Fuck" in a headline by simply spelling it "F**k" and points out how ludicrous this is. Why is it that we see the asterisk character as less offensive when our mind simply does the job of translating the word anyway? Is it the word that is offensive or is it the letters? ( ... but I digress.) Besides, Planet Motherfucker is about attitude and it would be a disservice to the spirit of this product to water that down.
Planet Motherfucker is a RPG campaign setting concept by Jack W. Shear over at Tales of the Grotesque and Dungeonesque. I just received my copy of the Planet Motherfucker booklet in the mail and immediately (the same day) ran a Five by Five game inspired by its content. There are some good reviews of Planet Motherfucker out there HERE and HERE.
I highly recommend buying Planet Motherfucker from LuLu. It's a 42 page booklet and it's a quick read. Most of what it contains (minus random tables) can be found for free by reading it from Jack's Blog. So, why buy the book? Because it puts all the attitude of the setting in one place and makes it quickly available to your players ... and that's important because Planet Motherfucker is a campaign setting that you are going to want to play! You will want to hand your players this book and say, "Wrap your head around this! This is what we are going to play!"
Above, I say that Planet Motherfucker is a "campaign setting concept." I think it's important to understand going in that this isn't a book about game rules and world setting cartography. It's broad strokes of a brush, really little more than a stream of disturbed consciousness. It's about communicating attitude. And Planet Motherfucker does that very well. Jack gives us a glimpse of a raunchy, rambling, zombie rockstar, drug overdose world, and leaves the particulars to us.
I call Five by Five an RPG toolkit. It's tools for playing a game that you build yourself. Planet Motherfucker is the same. And I feel the two are a perfect fit. So much so that I ran a game.
I had three players:
Taz: a Mechanic/Roadwarrior with a penchant for slapping things in the head with his crowbar.
Doc: a Mad Doctor/Plastic Surgeon to the Pornstars/Dual Wielding Gunslinger.
and a Catholic Schoolgirl Samurai Warrior named Jaax.
Planet Motherfucker provides some sample characters (stats for Savage World?) that offer plenty of inspiration and it was easy to convert these to Five by Five. Jaax (my girlfriend Mendi's character) is provided above for your review.
The players were in a raunchy nightclub in Lost Angels when cultists from Necro-Leans set off a zombie bomb nearby transforming everyone into Zombies. Unbeknownst to the players, being "drunk" provides a natural defense to the bomb, so they (the PC's) and many others in the night club prove immune to the effects.
Doc is a crack shot during the Zombie battle in the night club managing to hit and score critical damage three turns in a row with every shot of his dual wield heavy pistols. Eventually as a swarm of Zombies overtake the club, the group goes on the run and is picked up by a VW microbus, when an unnaturally buxom porn-starlet leans out the bus window declaring, "Hey, that's my Doctor!"
There was every chance that the porn starlet in question, along with her two porn star companions (one male; one female) might have bought it right there at the hands of the players. All three were decked out in Zombie makeup. The porn stars had just come from the set of "Zombie Sex Slaves from Mars!" This was the original title of my adventure for the evening, but in the hour prep time I had before the game, I just couldn't make that work!
But, the players role-played the encounter with the "zombie" porn stars and end up joining forces (later offering the porn stars as trade goods in exchange for supplies.) I love this "off the cuff" style of play and I think my favorite encounter happened as the players (having fled into the countryside) are attacked by a pack of zombie coyotes.
I got a pretty cool visual of the scene as Taz driving a dirt bike with Jaax riding "bitch" (she has driving as her trouble trait so she doesn't drive) strafe through the pack of zombie coyotes so Jaax can dice them up with her Samurai Sword.
The group had a blast. I had a blast! I plan to run Planet Motherfucker Five by Five again soon. When you get a chance check out Tales of the Grotesque and Dungeonesque and Planet Motherfucker. You'll be glad you did!
Regards,
Jeff Moore
Posted by Jeff Moore at 12:08 PM