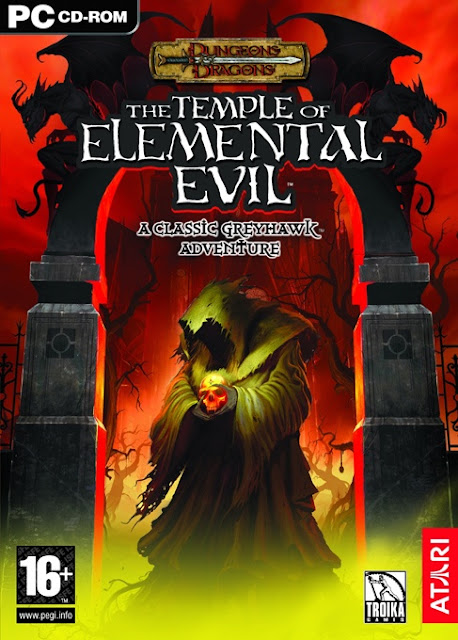 I could have sworn that I bought this game ... Temple of Elemental Evil.

It remains one of the only games to use the D&D 3.5 rules set. And if you like those rules (and I know that you do) the implementation was supposed to be pretty darn good.

Problem was the game was "buggy" as hell.

Interestingly, I decided to look into the game again ... (has to do with work I am trying to do for the game design project I am involved with right now.) And what did I find?

Since it is in fact the only computer game implementation of the 3.5 rules (and as I said, according to what I have read, a very good one) D&D fans have decided that it's up to them to make the damn game work.

There are fan patches to fix almost all the bugs and in fact new content that takes the game from it's level 10 cap all the way up to level 20. I even saw a "Keep on the Borderlands" module patch.

The "modding" community is a crazy concept to me ... awesome.

Anyway, the game seems like it might be an entirely new experience if a person would care to give it a fresh look (10 years after it's initial release.)

So, I looked and GoG (Good Old Games) has it on downloadable install for less than $4. Less than $4?  Less than coffee and a doughnut?  I just went ahead and bought it again ... what the heck.

I will let you know if my second experience with the game is any better than my first.