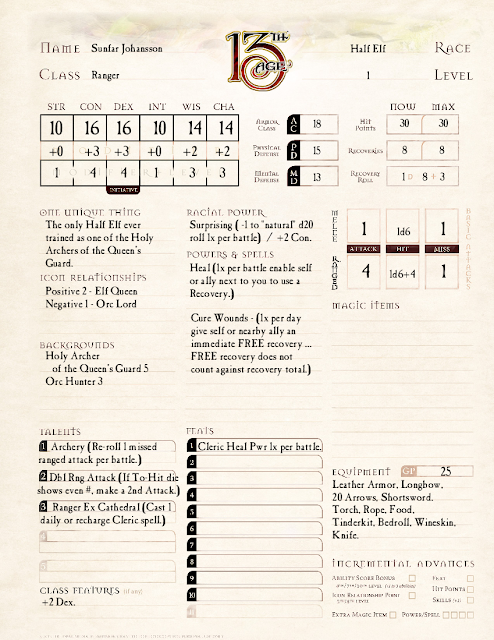 Dungeons and Dragons 4E really didn't sit well with me. My first RPG experience was AD&D it was first edition, but for us it was just AD&D which distinguished it from Basic D&D which was somehow to our high-school aged minds inferior. I have watched the RPG evolve and I have been along for the ride. And through most of it, after AD&D and high-school I was the GM or referee. I have run so many different games and game systems ... Traveller, Villains and Vigilantes, Champions, Time Master, Star Wars, Ghost Busters, Doctor Who, Mekton, Warhammer Fantasy Role-Play, Dream Park, Toon, High Colonies, Justifiers, Fantasy Hero, Star Hero, Chill, Top Secret, Gamma World, Serenity, Marvel Superhero Adventure Game, Savage Worlds ... I am sure that I have missed a few ...

And there is Dungeons and Dragons, I've run original D&D and AD&D first and second edition and 3rd and 4th Edition, and even some D&D clones Labyrinth Lord, Lamentations of the Flame Princess, Castles and Crusades. I have enjoyed all of them. All of the games that I ran were fun to play. But the list of games you see here is so massive because all of them eventually lost their luster and me and my players decide it's time to try something else. The thing is, of all the games I have ever run, 4E probably lost it's luster the quickest.

I know the game system gets it's share of grief. I believe that in some circles in the community the game is considered a failure. I am not sure what it is about the game that ruined it. But, here are my 2 cents ... such as they are ... there are many many mechanics and fiddly bits infused in the name of "game balance" that seem to restrict choice. Role Play felt somehow strangled by this restriction ... I am not sure why, but it was there. The game wasn't friendly enough. It didn't invite you as a play group to "make it your own" to "house rule" and pick and choose. In the name of game balance the whole thing seemed like a very delicate house of cards. We were "afraid" to mess with it ... to "play" with it. So, we didn't. And in a few months we moved on. That's the fairest evaluation I can give.

So ... 13th Age. My brother Chris (who has edited a few of my RPGs for me) is in LOVE with 13th Age. I have been looking it over, and ... it has mechanics and bits that make it so much like 4E it's scary, one of the game's two key designers is Rob Heinsoo who was the lead developer for 4E. Don't take my word for it, there are plenty of reviews of 13th Age out there. I won't get into too much detail here about the game or it's mechanics. I just want to share my "gut" feeling.

If what I speak of above regarding my impressions of 4E are on the mark, then 13th Age speaks to those. Many 4E design mechanics are present, but they are presented in an accessible and modular fashion that invites you to use what you want, change what you want ... to make the game your own. Perhaps there's something to my criticisms of 4E. Perhaps I am not the only one who had this impression of the rules.

So, 13 Age gives the appearance of being more user friendly ... but what really sold me, was USING the rules. I made a few characters, and it was SO MUCH FUN. At first the 4E-ness of it intimidated me and I was a little reluctant to start, but once I made my first character, I was all in. And I went to bed that night thinking about character creation. The next day, I made another character. The picture at top is my second 13th Age character. Both characters were so much fun to make. I find that I want to make more.

My other major concern with 4E was the way that the inaccessible structure seemed to limit role-play by tying everything so tightly up in rules (it really felt like playing a board game.) Well, I already mentioned that 13th Age has loosened up the 4E rules stranglehold. But, as if that weren't enough, the game also is loaded to bare with tools designed to give players all manner of role-play handles. It seems like 13th Age has addressed every concern about 4E that I had, and made the best of corrections.

D&D Next (based on play-test materials only) seems to have removed itself from much of what 4E was in the interest or reclaiming it's audience. It's a very different approach to the problem that was 4E. And, it too makes choices in both making the game that we play more accessible while attempting to retain some of what 4E had so as not to alienate those people who did play and enjoy 4E (they are out there.)

The D&D Next choices are very different, and I don't feel like it's an evolution of the previous edition so much as a reboot. 13th Age seems more like evolution. So, if you were a fan of 4E, then you really owe it to yourself to give 13th Age a look. If not ... well, if what I say above about my impressions of 4E resonate with you at all, then maybe you should look at 13th Age too.

There are some wonky, fiddly gamey-wamey bits that concern me ... but, I am reserving judgement until I have a chance to play. Because there is so much potential good here, it just can't be ignored. And as an aside this is one of the most beautiful game books I have ever bought. I don't mean the illustration or layout necessarily (which are pretty nice) but, rather the actual book. The weight of the paper, the quality of the binding. This is a really fantastically produced piece of hardware. It deserves a spot on your gaming bookshelf for sure.