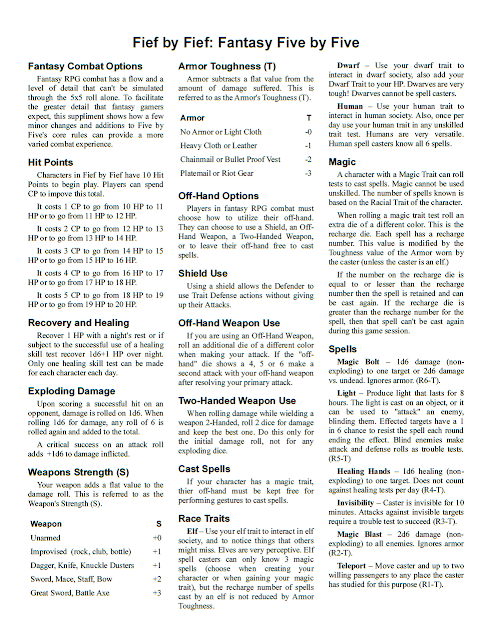 My previous post of a very compact 1 page Five by Five takes the game in a direction that I really want it to go. Five by Five is about Narration over Simulation. It's supposed to be quick and simple. Too much detail gets in the way. I had been struggling with Weapons and Armor for Five by Five and how to make them more effective. In Fantasy RPG's especially, weapons and armor seem to be of paramount importance.

But, my solution in the Fast Play Five by Five that I just posted was to pull away from the problem entirely. If weapons and armor are important to the narration that can come out during play, but I have decided that for the most part, quantifying such things does not serve the narrative.

In the Five by Five game that I am running on Tuesday nights, one player has managed to obtain a bazooka. Now, I could quantify the bazooka using one of the weapon and armor systems that I have discussed here. But, the truth is ... if you shoot a man with a bazooka ... the man dies. That should be the result of the simulation ... right?

But what if I don't try to quantify the bazooka as a simulation and only deal with it as an aspect of the narrative? If in the story we are telling, the player shoots the bazooka at a brick wall, the wall is going to shatter into a pile of rubble and the players can pass through the hole they made to get to whatever might be behind the wall. This makes sense to me. It serves the narrative and makes the bazooka an effective element in the story.

Now, if later that same player shoots his bazooka at the big-bad, the main villain of the story, using the combat rules of the Five by Five fast play this attack (if successful) will only inflict 1 or 2 points of stress towards defeating the villain. Now, shouldn't the bazooka blow the big-bad to smithereens like it did the wall? Sure. But how does this serve the narrative? It doesn't. It cuts the conflict short, and makes the big-bad no more of a threat than one of his henchmen.

But, if I stick with the rules as written, I can describe how the successful use of the bazooka resulted in the bazooka shell impacting a point directly behind the big-bad, throwing up all manner of debris which injure the big-bad and several of his cronies. The big-bad isn't out for the count in a single shot, and the integrity of the bazooka within the fiction of the story is maintained. I just had to adjust what a successful test meant within the context of the current situation. The use of the bazooka was not cut-and-dried. It was more than a static number +X to damage. That's what Five by Five is supposed to do.

All that said, it has been brought to my attention that some players are playing a version of Five by Five that borrows from each of the differing versions that I have written and there seems to be a preference for the Weapon and Armor rules from the first version of the game. I get that sometimes RPG combat is meant to be a tactical mini-wargame within a game separated from the narrative, and that many people like that. That's cool. In the interest of appealing to that audience I have produced a second 1 page RPG document. This one is meant to serve as a fantasy expansion for the first one.

I like writing the concise "1 page" RPG. I can get my ideas distilled down and share them very quickly and effectively. I think that if I were running a super-hero game or other similar type genre where things like weapons and armor aren't so much treasures to acquire as they are extensions of the character that my Five by Five Fast Play rules really have everything you need. But, I also recognize that sometimes players want "treasures" and things like weapons and armor have to have some real impact on the mechanical nature of a character for many players to feel a tangible accomplishment at acquiring them. For that. the consensus seems to be that version 1 of Five by Five had gotten it right, so maybe this new 1 page expansion will hit that sweet spot. Let me know.