Five by Five Back to Basics 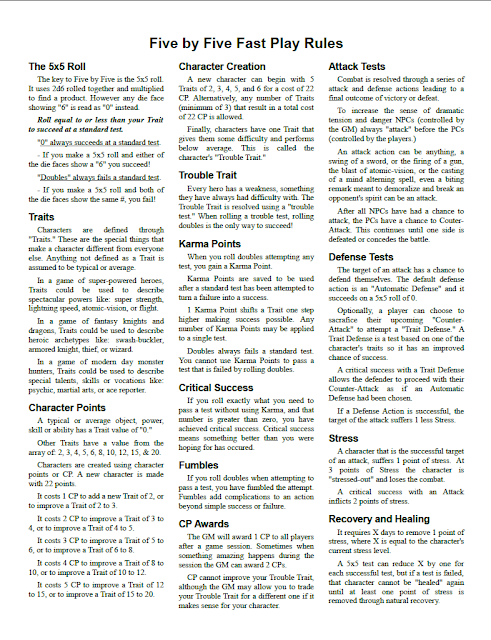 First a big thanks to Rob Lang for the Re-Review of Five by Five on the Free RPG Blog. Thanks for the love Rob!

Rob and I have had many discussions (via email ... e-scussions? Is that a thing?) about generic systems versus systems designed for and focused on a specific genre/setting/world. Rob being pro-non-generic, advocating the strengths of targeting a specific world, genre, etc. when working on design.

I have always argued that generic systems have their place, but as I have been struggling with creating a "Fantasy Version" of Five by Five, I begin to realize just how right Rob is. Fantasy Five by Five has become a struggle with weapons and armor and magic. Trappings exclusive to the Fantasy RPG's that Five by Five was never designed for. I have been fighting with a way to shoe-horn something in without sacrificing the exclusive use of the 5x5 Roll in the process. And, I have been losing.

What I realize is that Five by Five works best when it embraces it's generic nature. And in a weird way this realization makes Rob's point in that, the Five by Five system isn't so much a generic system as Five by Five is "Five by Five" and it only works when it is allowed to be itself.

Five by Five is meant to be a "Jack of All Trades - Master of None" RPG. It's meant to allow players to create anything they want quickly and easily. Detail is intentionally kept nondescript to make room for fast free form play. It's not meant to be tactical. It's not a simulation. It's meant to be easy and tether free. It's not so much a "setting" as it is a statement of intent. But, the game only works when the players are playing "that" game. Five by Five doesn't work to play "D&D" ... and it shouldn't.

I was working on a sort of Five by Five "cheat sheet" to allow me to fit all the rules for Five by Five on a single sheet of paper. I was going to use this a summary in the Fantasy Five by Five supplement as a sort of "recap." But, I couldn't get everything to fit. Combat ... even the basic combat of the current core rules was just too complex.

I found a solution: "Stop trying to make Five by Five work like other more tactically based RPG's." With that realization, I was able to streamline combat and at the same time take Five by Five a step in the "Storytelling Game" direction. It's a good direction for the "freedom" that Five by Five is designed to provide.

Take a look at these Five by Five Fast Play Rules. They are the same rules but with streamlined simplified combat/conflict resolution. What do you think? Is this the right direction for Five by Five in the future?