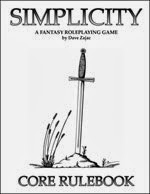 Simplicity by Dave Zajac
Simplicity is an interesting piece of work. It looks at the crunchy bits of D&D 3.X and the accessible more basic design of D&D BX and it fuses the bits together to form something that reminds me a lot of True 20. But, better, easier ... it plays like an OSR game, but character creation manages to capture the modular design of modern games without becoming a burden. If you like your fantasy RPG's simple, but find that the OSR is too limited, you could do worse than to give Simplicity a go. It's a very nice bit of work. And it's free. Also, you have the option to purchase the print version of the game and that's very nice too! 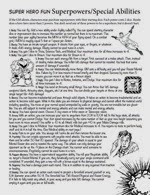 Superhero Fun
At six-pages, this little gem is quite the surprise. It's supers made easy, and it's the only Superhero RPG that I reviewed in 2013. I really wanted to love Margret Weis's Marvel Superheroes RPG, but the dice mechanic was just too fiddly to wrap my brain around. It's the simpler games like Superhero Fun and the Supercrew that win my seal of approval these days. I hope to one day produce a superhero version of Five by Five that manages to walk the line between playable and complete as well as this one does. Superhero Fun reminds me of mini-six, if mini-six was just for superheroes. It's a d6 dice pool game, it's easy, clean and familiar. 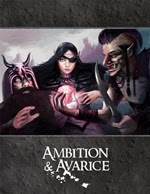 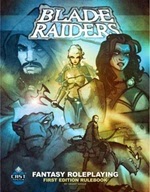 Blade Raiders
Blade Raiders is a bit of a mixed bag for me. It's a beautiful publication with fantastic presentation an original and interesting game world and a game design that's tied to the world in a real and functional way. The thing is ... the armor as HP mechanic didn't really work for me, and the wide array of magic powers and abilities seemed all a bit less than spectacular. I like Blade Raiders, it's an interesting design and I would love to hear from anyone who might be out there playing it, but for me it just didn't make it from the bedside to the tabletop. It's attractive, rules light, sword and sorcery ... so, it's worth a look. 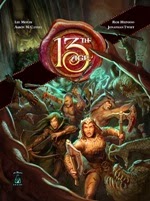 13th Age
Now that my friend Michael is running our Tuesday night Five by Five game, 13th Age is the only RPG that I am running. 13th Age is written by the designer of D&D 4th Edition which was not a game that I loved. And, 13th Age shows it's 4th Ed roots in much of what it offers. Amazingly, this isn't a bad thing. Somehow 13th Age fixes everything I didn't like about 4E and then takes the whole thing to 11. It's got a ton of interesting new mechanical tricks, to improve and streamline game play both in the combat war-game aspect of the rules and the role-play improvisational storytelling aspects of the game as well. It's an impressive balancing act that is very playable and found its way to my table almost instantly. If you want to play a modern D&D inspired game and Pathfinder is too crunchy for you, check out 13th Age. Hopefully it will surprise you as much as it did me. It was also the most attractive book I purchased last year.