Last week's 13th Age game was a lot of fun. The group, made up of the Human Paladin: Karl, the Gnoll Wizard: Gar, and the High Elf Holy Archer: Sunfar, were about to set off from Concord. This would start the second leg of their quest to deliver Dravonis, the dragon living in Gar's head that only Karl can talk to, and the magical golden orb artifact that the elf queen entrusted to Sunfar safely to Starport. Oh, and Karl's chief rival and almost nemesis, Anson Cole was in tow as well, having been charged by the order of the Gold to accompany Karl on his quest and keep him safe.

The group's journey was delayed because the roads were closed as travel upon them was to be reserved for the Emperor. The Emperor and his entourage were passing through on a very public and very uncharacteristic visit to see the Elf Queen. Karl and Gar both rolled 6's on their Icon Relations and Sunfar rolled a 6 on his Elf Queen relation ... so ... the Emperor was passing through on his way to see the elf queen and this effected the PC's. This is not something I had planned ahead of time. It happened because of the Icon Relationship rolls. It's something I really love about 13th Age and it fits my "free wheeling" improvisational approach to DMing quite well.

The delay could have been a problem, but several Paladins of the Gold were travelling with the Emperor and invited Karl and his party to travel along. As it happened, word of Karl and his personal quest for the dragon of Gold got back to the Emperor, who wanted to meet the Paladin. The Emperor had never himself met the Gold (or so, he reported to Karl) and so, Karl was seen to be a special young adventurer indeed. Karl told the Emperor pretty much everything about his quest and Gar and Dravonis, he held nothing back, and was rewarded with a magical longsword.

The two groups parted ways as the King's path led into the Elf Forests and Karl's led the opposite direction. No longer traveling on roads and in well populated areas, Karl, Gar, Sunfar, and Anson continued across country towards their goal. Around the second night into the wilds while Sunfar was on watch, an Orc Rogue crept up on the Sunfar and blew a magical silver powder into his face that caused him to fall fast asleep.

When the group woke in the morning they discovered that the Golden Orb, had been stolen. The group managed to find some footprints leading away from their camp and they pursued the thief. Eventually they came upon an area sort of like a stone circle (actually a stone rectangle) and the place was crawling with Goblins!

I got to use my Super Dungeon Explore miniatures that I have painted so far. I used the two Kobold Ogres (as Bugbears, which the 13th Age Monsters section refers to as, goblin giants) and also, I used the spawn points as my standing stones, and one of the treasure chests, too!

Which brings me to the real reason for this gaming report post ... my friends took a bunch of pictures so I just had to share some of them! 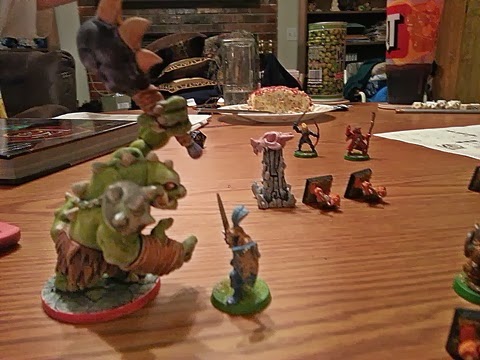 Here is one of the "Bugbears" in conflict with Karl. In the background you can see Sunfar (with the bow) on the left and Gar (with the staff) on the right. There are also two slain goblins (victim to Sunfar's arrows I believe) laying on the ground. As reported the Bugbear is a Kobold Ogre figure from Super Dungeon Explore. The heroes are all old figures from Advanced HeroQuest. 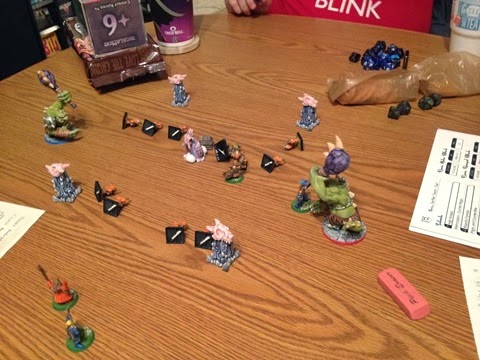 You can see an overview of the battlefield here. The stone pillars with the dragon skulls on top are spawn points from Super Dungeon Explore. All the dead goblins are from some pack of Warhammer plastic armies certainly just as old as the Advanced HeroQuest minis. The goblins were mooks and I think Sunfar dropped the majority of them in a single round. It was pretty awesome. 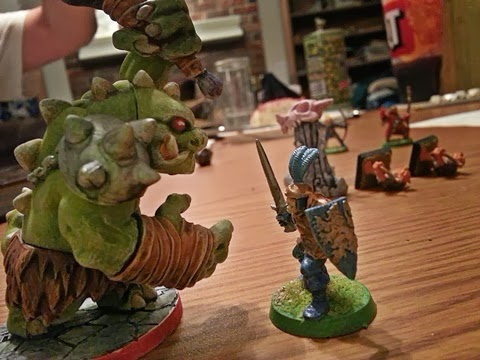 Close-Up on the Kobold Ogre (Bugbear). I am not a great painter, but I was proud of the paint job on these and wanted to show them off.

The heroes charged in boldly, while the goblins began chanting, "The Red! The Red! The Red!" Sunfar dropped the majority of the goblins with a hale of arrow fire. The Orc Rogue was at the center of the square by a fifth pillar of stone and a wooden treasure chest (barely visible in the second picture above.) Before he was killed he managed to blow a warning horn that summoned the two Bugbears.

The Bugbears were defeated and Sunfar went to investigate the treasure chest. This gave me a chance to swap the chest for a Boo-Booty! That's a Super Dungeon Explore treasure chest with teeth and a tongue! It seemed like an ideal sort of thing for the 13th Age world of living dungeons.

The Boo-Booty was really tough and when finally defeated it exploded! Sunfar had retreated at this point to use his bow, leaving Karl and Anson in melee contact with the monster. As the explosion happened, Anson pushed Karl free of the blast and suffered the brunt of the explosion himself. Anson died protecting Karl.

The explosion also knocks over the center standing stone, which is notable because Gar had detected both magic and evil while inside the "square" but, now these sensations were gone. Oh, and in the center of the black charged earth marking the location of the blast ... the Golden Orb ... unharmed. Sunfar finds the magic silver sleep dust on the Orc's dead body and now has this magic in his possession. It's hard to tell just how many applications of the dust he might have, but it seems like a lot.

This is where we left it for the night. I really enjoyed pulling out the minis. I hadn't done that in a long time. I also really like the way 13th Age plays. The tools that it gives me for randomly determining certain elements of the story means that even I am never sure what might happen in an evenings play ... and I like that.

All in all a good time was had by everyone.