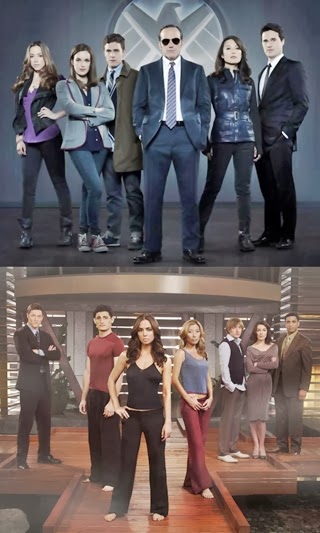 My last two posts were write-ups of the SHIELD team for Super-Five. Creating these characters for Super-Five was problematic. Many of the traits ended up being repetitive. The characters in Marvel's Agents of SHIELD don't exist outside of SHIELD and that is a problem.

Super-Five restricts the Five by Five character traits in order to create a very specific kind of fiction ... the comic book. Below I have copied the text from the introduction to the Super-Five RPG at least as it stands currently ...

Imagine a simpler time. It was a time before computers could fit into the palm of your hand, before a favorite movie streamed to your location with the touch of a finger. This was a time, not so very long ago, when the only portable entertainment available to a kid in need of a fantasy was called a book.

When I was young, the most vibrant, colorful, and exciting books, were comic books. Other books seemed a little too much like those we had to read for school. But, comic books, with their bright illustrated pages of larger than life heroes, they were a blockbuster movie on paper, just for me. The magic of the comic book may soon be lost to the passage of time and the forward march of technology. But, comics have left a legacy behind them.

Movies and television tell the stories of costumed vigilantes and their wars against crime. The evolution of the superhero from paper to film has been nothing short of miraculous, but superheroes are an invention of the comic book page. As movies and television bring the superhero to life, steps are taken to create something that moves and breathes and can be portrayed by real living actors, and a bit of the comic book is lost.

Comic books are big and bold, and reality is only hinted at in their pages. Stories are told of comic book editor Stan Lee jumping up on his desk and waving his arms over his head when emphasizing a story to artists and writers that he worked with to encourage them to make absolutely everything larger than life. Big was more important than real.

Yet, Stan told stories that spoke to real people, because his heroes had lives with "real" problems. His reality wasn't in his simulation of action, it was in his view of the people behind the action. The absurdity of a man swinging on ropes from the skyscrapers of New York like Tarzan on vines through a jungle was made all the more real by the fact that at the end of the day, the hero still had to be home in time for supper and to finish his homework.

The absurd is made real, because there are people behind the masks, and they lead real lives. The fantastic can be as big and outlandish as we can make it, and as long as the person under the mask remains relatable, we can see ourselves in their world. This is the magic of the superhero comic book.

When I sit down around a table with some friends to role-play, to collectively tell outlandish adventure stories in which we ourselves are the heroes. I like to remember what made those comic books of my youth so magical and bring some of that magic to the game we play.

The Super Five RPG is written with that magic in mind.

This introduction speaks a lot to what I hope Super-Five will accomplish and about what I think is the secret to the magic of comic books. The magic of the comic book is that the heroes are people with a connection to the world that is our world. Or at least a world that we imagine could be ours.
I want Super-Five to help reinforce the hero and their connection to their world. I have the "super-powers" oriented trait categories: Attack, Defense, and Mobility. And I have the "secret identity" oriented trait categories: Vocation, Hobby, and Charge. The categories are flexible and open to interpretation. I don't say anywhere, "these" must be super-powers and "these" must be everyday skills. But, the design is meant to create that tendency. A tendency to build Superheroes that are people too.
What makes "ordinary people" relatable is their connection to ordinary things. Joss understood this when he wrote the Avengers. It's why Phil collects Captain America trading cards and has a girlfriend who is a cellist. These are ordinary things; things that connect him to the real world. They make him a character we can relate to.
When Joss created Firefly he took a sort of inside-out approach to this whole thing. Instead of using the "world" to make fantastic characters believable, he used believable characters to introduce us to a fantastic world. The characters in Firefly weren't heroes. They were just people trying to eek out a living by doing a job. They were relatable pretty much from the get-go because their motivations were the same as everyone who works a job to care for himself and his family.
This was necessary, because it was the characters that would connect us to the world and not the other way around. The world of Firefly was new and different and magical, and in order to introduce us to this world in bite sized pieces, Joss locked us away from the world inside the walls of a spaceship. He then introduced us to his world a piece at a time through the eyes of the characters.
Now all of this is just supposition on my part, but I think that Jed Whedon and Maurissa Tancharoen are big fans of the way that Firefly isolated the audience from the world and created a fishbowl environment where they as writers could control the flow of information into the world. I say this because I feel that they do this with Marvel's Agents of SHIELD, and I feel that they did this with their previous project, Dollhouse.
Dollhouse was about a group of Agents isolated from the world and connected with a nebulously defined organization. The lives of these agents outside of the agency for which they worked was largely a mystery. Everything that happened to the characters was an aspect of them as an extension of the agency.
Sound familiar?
Here's the thing ... for the average Joe like you or I ... "agent" is not a relatable job. Agent means James Bond. It means Superhero. We cannot feel comfortable in the fishbowl with these people. Dollhouse is about superheroes poking their noses out of their isolated micro world one episode at a time to show us nothing more of the world than what the plot of the episode demands before returning once again to the isolation of the fish-bowl.
Oh, sure there were things going on ... broader story lines for individual characters. The mystery of "Echo" the romance between the director and one of the dolls. But these things were insular to the micro world. Nothing connected the dolls to the greater universe. These people aren't real by themselves. We need a tether to connect them to something we can recognize as reality.
With Firefly the characters could live in a fish bowl because we understood "them." They were us. They lived for the basic necessities of life. Work, make money, buy food, eat. We understood what motivated these characters because it was the same thing that motivates us every day. We could live in the fishbowl with these characters because we knew them. They were us.
We saw little bits of ourselves in the characters in Dollhouse, but they weren't us. Their lives were too fantastic. They worked for the "Agency" they didn't seem to have a choice. And neither did we as an audience. We watched these characters doing this job they were tasked with doing, but the job was fantastical, the people were fantastical, and the real world ... out of touch.
That was Dollhouse. That is Agents of SHIELD. For all intents and purposes the same show. A show about people tasked with a job that they can't escape. They tend to perform the job without question. And they do not seem to gain any personal benefit from the outcome. They have no loves, no lives, no hopes, no dreams, no aspirations beyond the context of the "Agency" for which they work.
Agents of SHIELD misses the "real world" half of the six trait framework that I designed for Super-Five, and it might be egotistical of me, but I think that if the characters in Marvel's Agents of SHIELD had been created as Super-Five RPG characters first. We'd be watching a better show now.