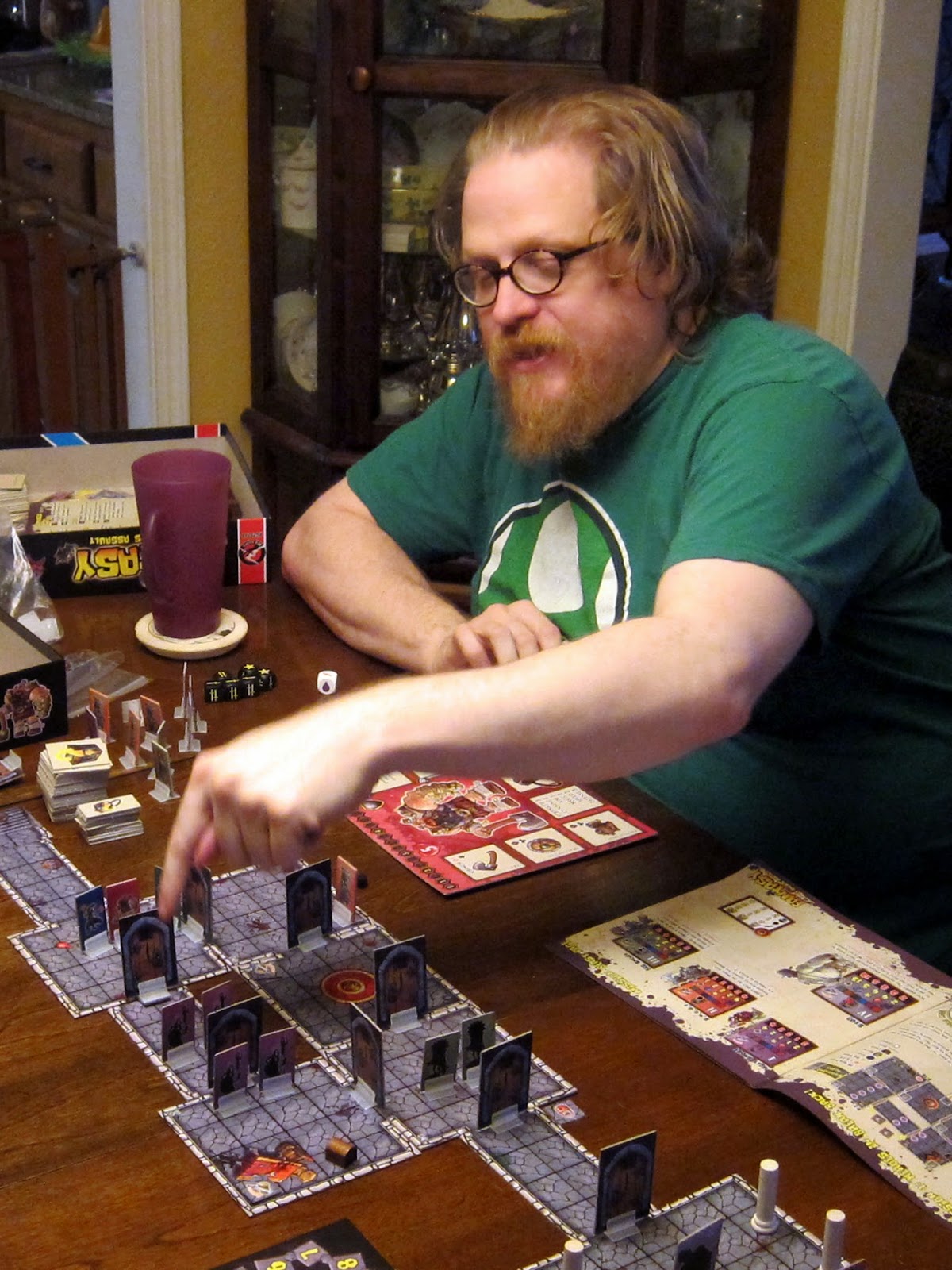 I love all the toys that come with Dungeon Crawl style board games. I own the classics: Hero Quest, Advanced Hero Quest, and Warhammer Quest as well as Super Dungeon Explore. I bought these mostly for all the cool minis, but I do play Hero Quest from time to time.

I don't own Descent - Journeys in the Dark, although it's been on my wish list for quite some time. I think what is holding me back is that I am apprehensive about the complexity of game play. I already have a bunch of minis (mostly unpainted) and don't feel a huge push to add a lot more of the same. So, I want a game to play.

I really like Hero Quest. It remains a favorite after many years. I would like to find a game that matches its feel in complexity and game play. To this day, I have not found my perfect Hero Quest replacement. But, Super Fantasy - Ugly Snout's Assault comes pretty close.

I was hoping that Super Dungeon Explore would scratch the Hero Quest itch, but the rules turned out to be so intimidating that I have yet to bring that game to my table. Also, there really isn't any kind of dungeon builder/quest design element to the game which is a key selling point of Hero Quest and its replayability.

Another thing that Super Dungeon Explore lacks is any sense of continuity from game to game. The game is meant to be played as a "one-off" and not in a campaign style (another thing that I like about Hero Quest.) So, I want an easy to play, dungeon building, customizable dungeon crawl game with a campaign element. 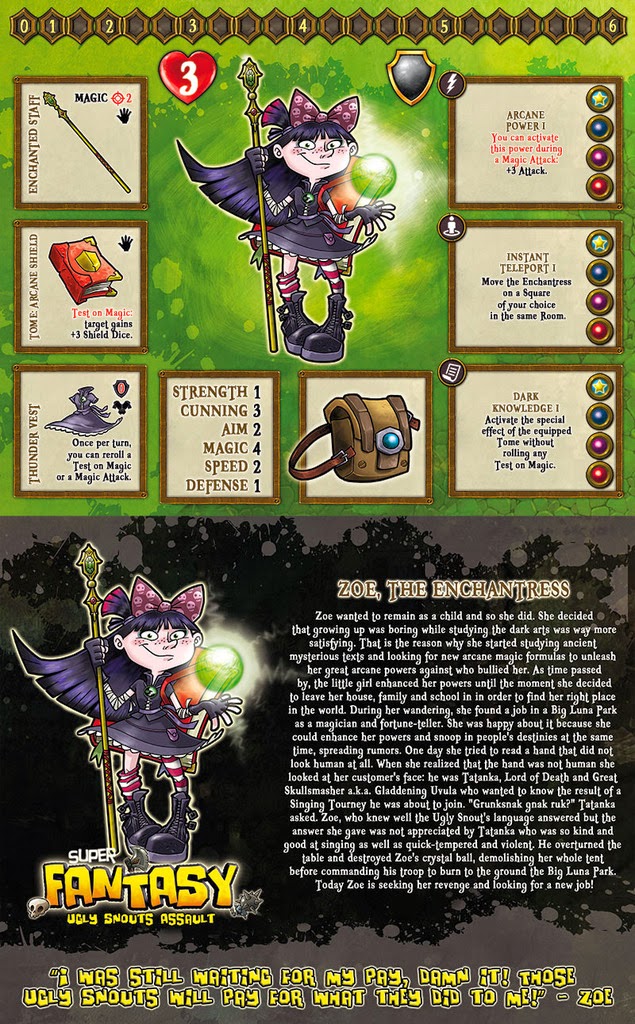 How does Super Fantasy - Ugly Snout's Assault measure up?

There are six playable characters and each one is sufficiently different in play style. Characters have attribute scores which do come into play during the game, but things are balanced enough so that every character has a chance to do everything, and it doesn't seem like a group might lose a mission simply because they are missing character "x."

The game uses 6 sided dice, but these are really 3 sided as each "icon" on a die is repeated twice. These icons are a single sword (representing 1 success,) two swords (representing 2 successes,) and a star. The star indicates that you use the value of the character attribute in place of the star when adding the value from that die. Most things that you want to do have a difficulty of 6.

You have six dice to roll every turn. If you needed to get through a locked door and wanted to be certain you didn't fail to pick the lock, you could roll all 6 of your dice for this single task and you would be guaranteed success. Each die produces a minimum of 1 success, so rolling six dice guarantees you get a minimum result of 6. Attributes generally range from 1 to 3, with a few characters having an exceptional attribute with a value of 4. Rolling a couple of stars when trying to do something you are good at can result in a pretty awesome final result.

Your pool of 6 dice are used to do everything in the game. If you want to move on the board, you roll dice and can "walk" your character up to that far. If you roll a star, you add your "Speed" attribute to the result for each star that you rolled. When attacking with a melee weapon, you would add your Strength attribute for every star that you roll. It's really pretty slick and easy to learn and teach.

You can move, attack, open doors, whatever in any order, as long as you have the dice to do it. Out of dice? Pass your turn. However, be careful with that. You see, the Monsters don't roll dice. Each active monster will try to attack the heroes during the monster turn. If you don't want to take damage, you better have saved some dice back to defend yourself. Armor and shields will grant you some free dice that you can use each turn only for defense.

Chests contain big treasures and barrels contain small treasures. Smashing barrels reminded me of playing the Diablo computer game, and I liked it. When we played my character had a special ability that would allow him to slam monsters into chests and barrels for damage, but I didn't want to do it because I didn't want to lose the treasures inside. Today, I read in the book that when destroying items this way, I get to keep the treasures. Awesome! Moral: read the details of your powers in the book, there could be useful information there.

Your special powers charge up automatically every time you roll a star. The star still counts towards whatever you were doing but it also charges your powers. This "charging" mechanic is really cool and fun too. Although in our first game we missed (or rather I completely forgot) that you can charge a power with dice (just like any other action.) This would have been helpful for our Wizard who found herself engaged with a monster and unable to move away. (If your are next to a monster, you cannot move away, but it looks like every character has some kind of special power that can allow them to circumvent this.)

We found a book in a chest that the Wizard wanted to use, but she also wanted to keep her original book. There was no rules for swapping out items from your backpack that I could find, and I just told her that she could do it for free. She didn't like this, but the mission we were on had a switch you could flip by "paying" one dice. She liked that and we decided to let her "pay" one dice to swap the books in her backpack.

The rules are really intuitive and a quick house rule like the one mentioned was no problem. I like the dice pool. I like that the monsters don't use dice. There is a special dice called the "Fate Die" that is used for probability and rolled to test certain events in the dungeon. It has 1 skull (1 in six), 2 tear drops (2 in six) and 3 lightning bolts (3 in six) so you can test if certain things happen in the dungeon. The symbols on the fate die are all different colors matching the colors of the six heroes, so if you needed to choose a particular hero at random, you can do that too.

There is a Mission Book and missions have objectives that the party must work together to achieve. Every mission has a time limit (in rounds) and if that limit is exceeded, the mission is failed. When a hero dies, they automatically resurrect in the next round with full health, but you lose a tick off your mission counter. The party succeeds or fails as a group.

We succeeded in our mission with only a turn or two to spare. The objective was to close a portal, and as the clock ticket dangerously close to the end, we found that we were better off ignoring the bag guys and going straight for the goal. The Wizard teleported into position using a special ability and rolled a handful of dice to successfully close the portal, before a room full of monsters could react. The players win! The collapsing portal sucked up the remaining baddies and the heroes rejoiced.

I believe it's a sign of a good co-op game when the players high-five in triumph upon victory! This is a fun game, but does it fill the Hero Quest void?

The characters are good and the special abilities and experience development surpasses what Hero Quest does. You earn experience every time you damage a monster and level up while you play, and this is fun. The character options surpass Hero Quest so that's two in the plus column. (One for meeting expectations and one for surpassing them.)

The dice pool mechanic is clean and easy and versatile. And, I think that it's more fun then Hero Quest ... again, two in the plus column. This is a big one as I love Hero Quest's game play ... so to say that Super Fantasy is better is high praise.

There are no specific rules for building custom missions, but it would be so easy to do. I will call this customization enough to earn a plus. The dungeon tiles are cool and plentiful. I should be able to create my own missions as well as I do with Hero Quest. One in the plus column.

Does it support campaign play ... sigh, not really. However, this game could far more easily be adapted to a campaign style of play then Super Dungeon Explore. Played as is, it might still work in a campaign if you considered that Super Fantasy is Hero Quest played as a Rogue Like. You could keep your items and equipment but start back at first level every game. Alternately, you could change the XP mechanic to slow advancement to stretch things out over many games. Both of these are very doable, but as Super Fantasy doesn't support campaign play out of the box, I am calling this one in the minus column.

The rules book is not awesome. It looks pretty, but it was translated from Italian and it could really use some TLC from the right person to clean it up. That said, the rules are intuitive enough that it's not hard to work out what's supposed to be happening, and any questions I had got answered by reading some about the game at Board Game Geek. Still, the rule book earns one in the minus column.

One final note: mini's. Hero Quest has some of the most beautiful miniatures ever to grace any game ... full stop. Super Fantasy has none. Nada. Everything is cardboard counters (and some wooden pieces for variety.) The Super Fantasy components are passable, and the art is really lovely. But no mini's at all really hurt my heart. So, two in the minus column for that.

So I tally it up and I find that I have 5 pluses and 4 minuses. It seems like Super Fantasy just manages to come out on top when compared to Hero Quest. The cool thing is that the only places that it is lacking can be easily fixed. Changing the XP mechanic or incorporating some kind of "Rogue Like" game play can allow SF to easily support an ongoing campaign. If you write your own missions you can create your own baddies and use miniatures that you already own (I plan on using Super Dungeon Explore's mini's with SF.) 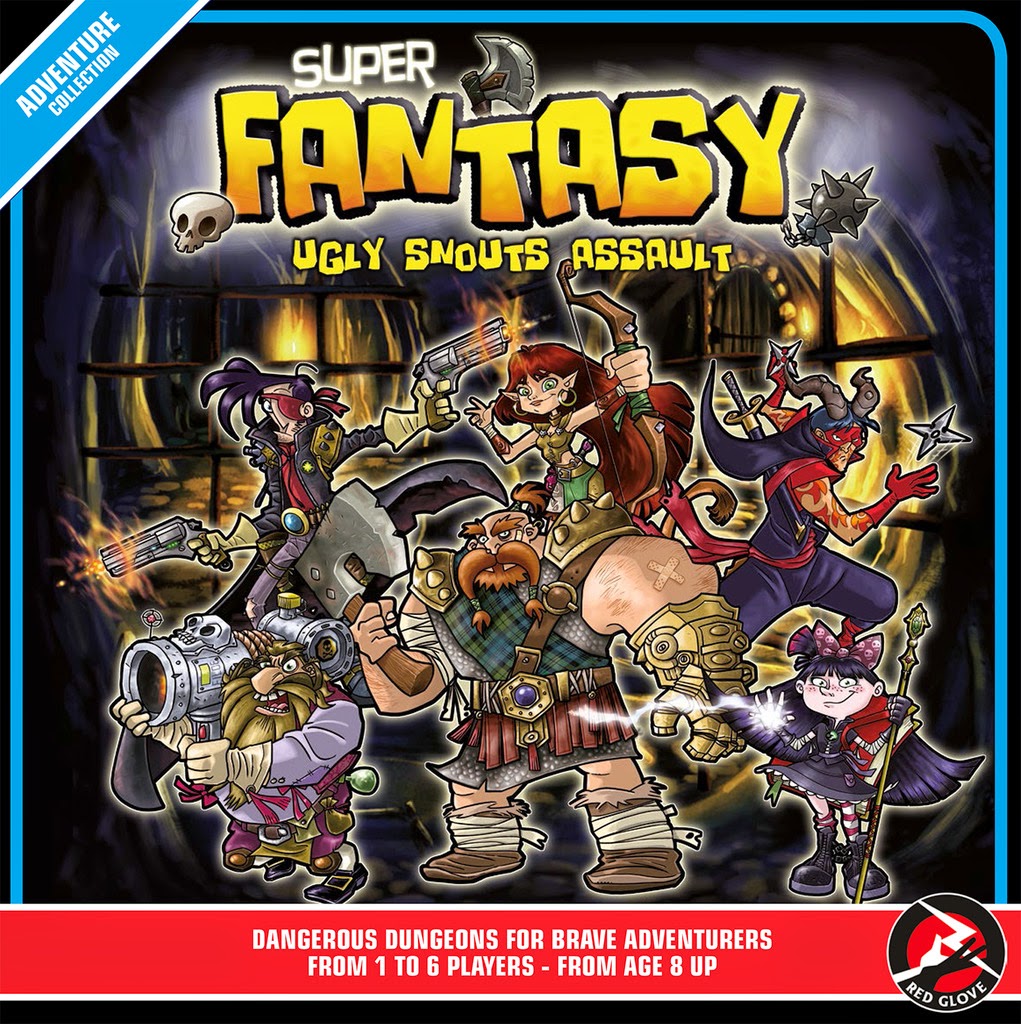 The game supports game-play both with and without a GM and even has solo and competitive arena style play. Super Fantasy - Ugly Snout's Assault is a genuine treasure, and pretty much any short comings that it may have are easily overcome. I believe SF to be a must have for fans of Hero Quest.