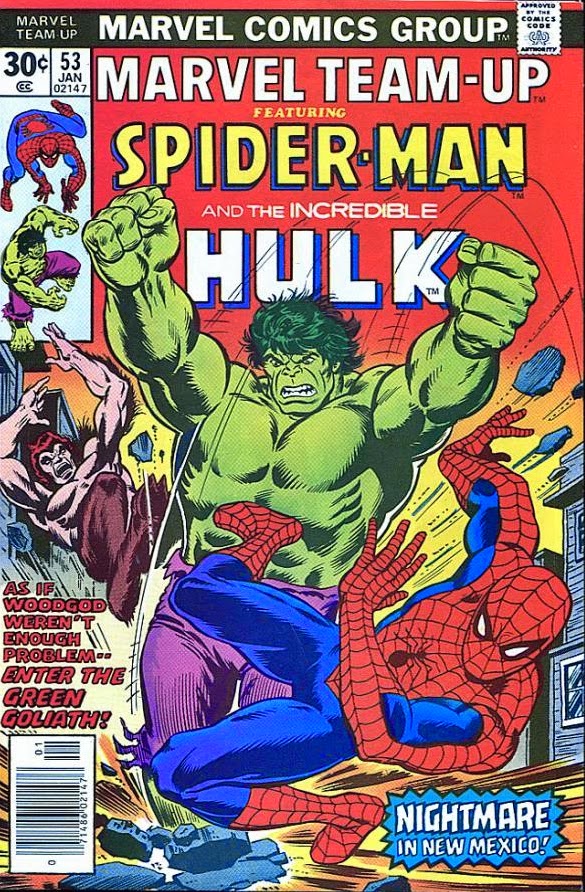 Memories of this one are faint ... I liked the Hulk. I liked Spider-Man ... and this new guy ... Woodgod ... he was cool. I was 11 years old when this comic was on the stands. And although I don't have strong connections with this issue specifically, it is part of a set of comics that I'd really love to have for my personal collection. I am speaking of the John Byrne illustrated issues of Marvel Team-Up. There aren't a lot of them, but they are all really beautiful to look at.

This issue has the distinction of being the first time that John Byrne ever drew the X-men. They appear briefly at the start of the story in what is a really overly contrived set-up to get Spider-Man into the story. It's painful enough that I wonder if this story wasn't originally penned to appear in the Hulk comics and somehow got pushed to Marvel Team-Up. 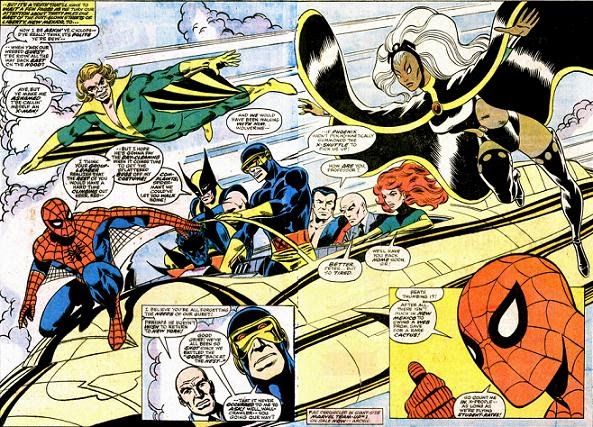 John Byrne draws the X-men for the first time, and they do look beautiful. But basically, the entire group including Spider-man are coming back from another adventure and are in the vicinity of New Mexico when some weird stuff happens, the group gets attacked, and the X-Men just dump Spidey in New Mexico to take care of the trouble alone while they continue on their way to New York. Maybe they figure Spider-man won't mind since both New York and New Mexico have "New" in their name?

The bulk of the story centers on the Hulk (who finds an abandoned town and so immediately adopts it as his own. "Hulk is all alone in town! Hulk is all there is -- so town must be Hulk's town!" And so declaring he begins to beat up the only other "person" he finds in the town. Not a person at all, but a goat legged monster creature basically a satyr ... but much bigger than I ever imagined a satyr to be (almost Hulk's size) ... a satyr on steroids. Woodgod is clearly trespassing and needs a beat down. 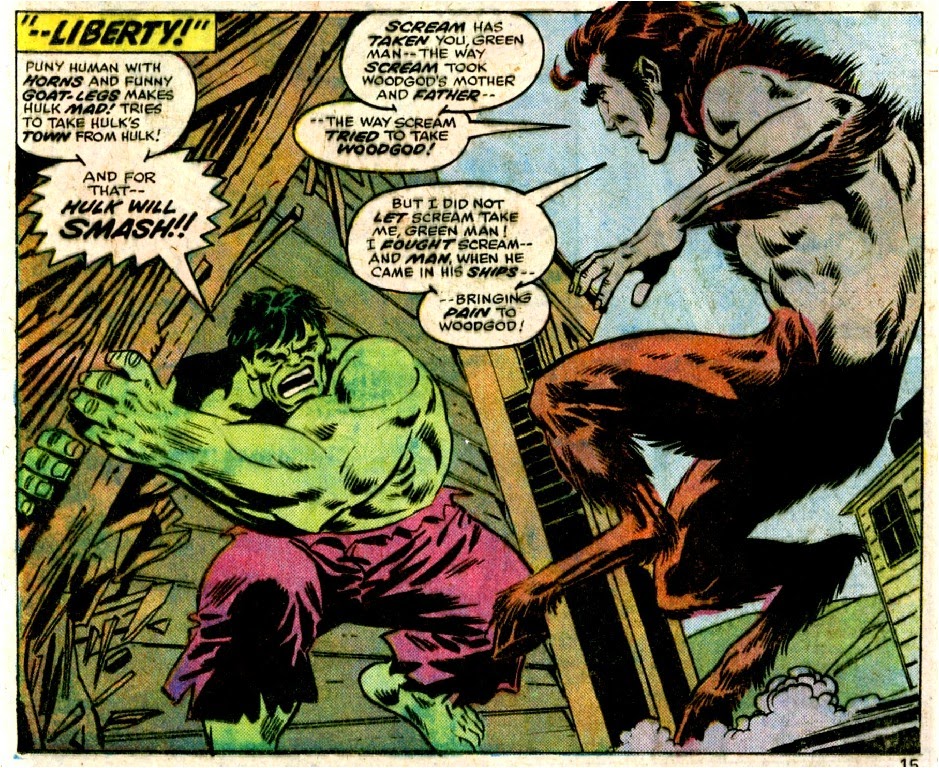 This exchange comprises the majority of the action of the issue. That and the "mystery of the town of Liberty" which is covered in a unidentified purple mist, an odd smell (or was that Woodgod ... I am unclear), and toxic levels of radiation. Men in radiation suits are amazed to find Spider-man alive, who thinks, "Lord save that old Russian - Doc Mishkin! It must be the anti-radiation mist he sprayed on me and the X-Men that's somehow keeping the gas from affecting yours truly!" and ... not, "Oh, my God! I've got to get out of here, that anti-radiation mist that the crazy Russian scientist sprayed on me could wear off at any minute!" Good old Spider-Man.

I actually enjoyed rereading this comic book quite a lot, despite the silliness. Byrne's art is nice. It's consistent and clean. It's the type of Byrne art that I really fell in love with. And the story was a quick read. I miss that. I don't feel like a comic has to occupy me for an hour or more to be enjoyed. A nice ten minute read is awesome. I'll go back and read it again, and spend more time enjoying the art. I miss the pacing of older comics like this one.

Sure the story this time had a lot that left me scratching (or shaking) my head especially where Spider-man's involvement was concerned ... But, as I said, Spidey doesn't really have a whole lot to do this issue, so if making sense would get in the way of his page count ... then I am all for the nonsensical. However it does look like Spidey will get to make up for things next issue as the final page cliff hanger dumps him right in the middle of the action. 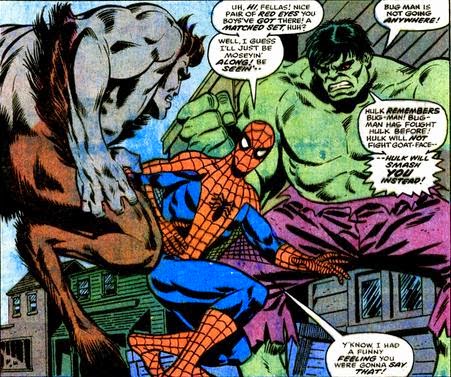 I can't wait to read the next issue!!

Email ThisBlogThis!Share to TwitterShare to FacebookShare to Pinterest
Labels: Comics