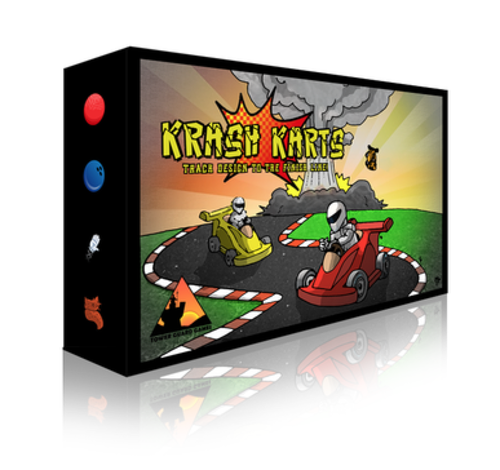 My friends and I played "Krash Karts" about a month ago now, and I had been meaning to talk about the game. Krash Karts is the first Kickstarter that I have backed and actually received product for. One cool thing about Kickstarter is since you really can't be completely sure when things are going to be finished and mailed out, receiving the packages can come as a surprise. This felt a little like a Christmas present.

Krash Karts is a card game that plays like a board game, and is about racing and battling go-carts. It is completely obvious that the designer of Krash Karts wanted to make a board game that emulates the video game "Mario Cart." The cool thing about this game is he not only succeeded in his goal, he made a game that is darn fun to play in its own right. None of the people I played with had ever played Mario Cart (Tragedy ... I know!) and they all had a blast! I have spent many many many hours playing Mario Cart on my Wii ... and I had a double blast! This game is fun. 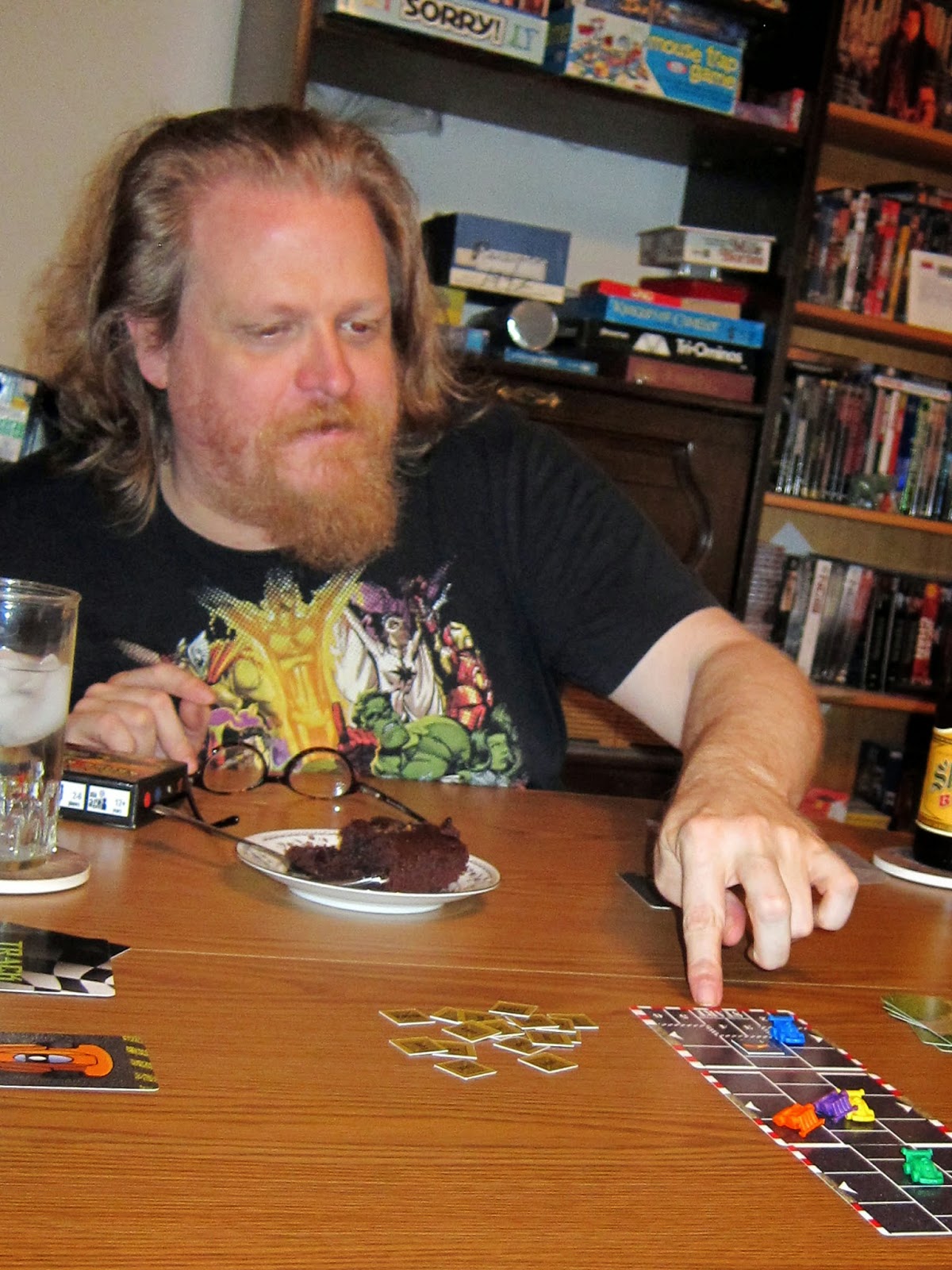 Each player begins with an equal number of cards (I think we each had 3.) These cards are pieces of track to drive on. In Krash Karts you build the race course as you play. This is part of the strategy and part of the fun. Every one has 3 action points they can use to do stuff. Move or draw a weapon card. Since everyone has the same access to resources, using your resources (especially weapons) is the key to victory!

When your car drives off the edge of a track, you must place a new card for your car to drive on. If you are out of cards and can't add to the edge of the track when your car passes over, that's it! You win the game!

This is a PvP battle game but combat is fun and never felt malicious. I really enjoyed the sense of competition and watching the race track take form as we played. The weapons are clever "generic" versions of something very like what Mario Cart might offer and they work really well. 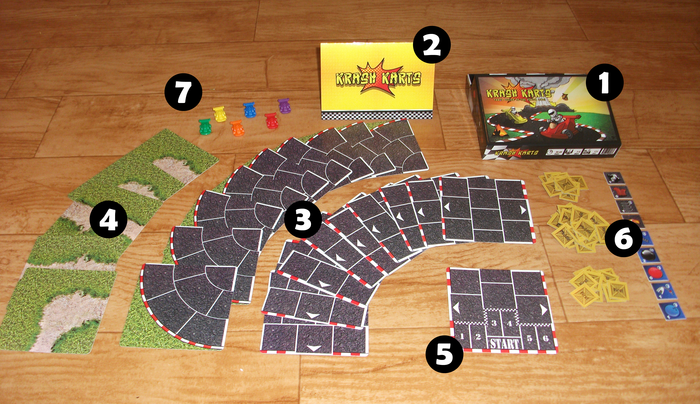 The item cards are really clever they pull triple duty allowing you to attack, defend or lay a certain number of track pieces or short cuts depending upon how they are played. Short cuts are an especially clever device as they allow a car to leave the track and enter at a different location. You can only lay shortcut tiles that form a complete path off and then back onto the track, and since the track is built while you play, it means that the car that's in the lead isn't going to be able to use them because the track ahead hasn't been built yet and you can never go backward. But, the shortcuts can be a game changer for a racer that's gotten stuck in the rear who needs a quick way to catch up. (A single short cut counts as 1 space of movement for a car that uses it no matter how many cards are used to actually make the shortcut!) 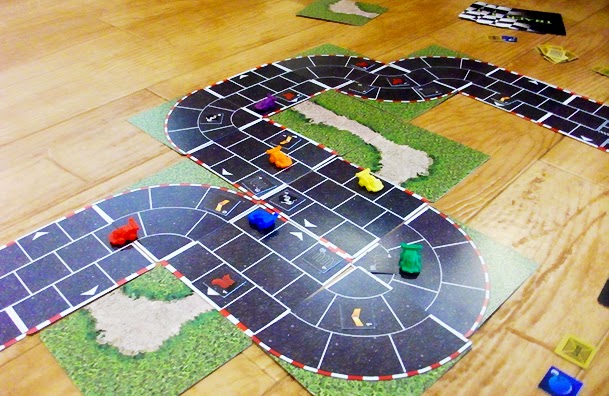 We only played once, but things felt really balanced. Everyone has said that they'd like to play again! The game comes in a really small box and everything was really well packaged. I can see carrying this around with me to play on the go. Although the modular track does require a decent amount of table space.

If I could change anything I would make the 3 different tiers of item tokens different colors. Items are balanced and you draw from the pile that corresponds to your placement in the race: 1st, middle, or last. This is also very "Mario Cart" and works well. However all item tokens are the same color. They are marked with the appropriate tier, but these things are tiny and hard to read at a glance. It would have really helped if the different item tokens were different colors based on their tier. 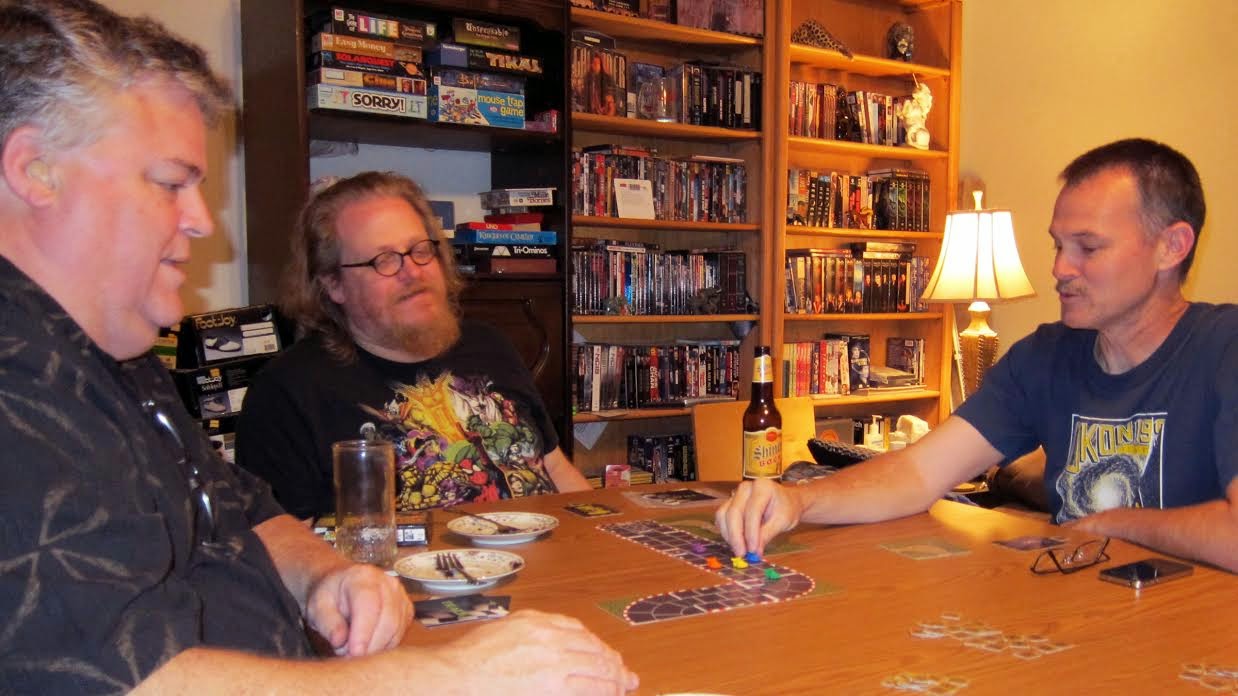 If you like competitive modular games with a decent amount of strategy that's easy to play. I would recommend this game. If you love Mario Cart as I do, I would really really recommend this game. The game and theme here are perfectly presented. One thing I didn't mention is "drivers." The game also has driver characters that you can play to give yourself special advantages in the race. I wasn't that impressed with these, but to be fair, we didn't play with them so I can't speak to how much fun they really are, or what they actually add to the game. I think we might play a few more times without before we add the character cards.

Email ThisBlogThis!Share to TwitterShare to FacebookShare to Pinterest
Labels: Board Games, Kickstarter