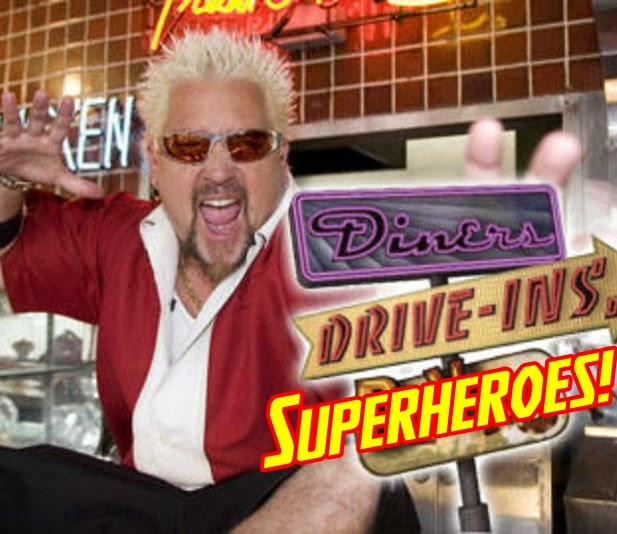 Welcome to part 2 of my latest "Hero DxD" play-test report.

When last we left our intrepid heroes the villainous Mamma Bear (wife of the evil J.J. -which although being played by Laurence Fishburne is named for James Earl Jones ... but, if you saw "evil J.J. and immediately thought I named the villain for J.J. Abrams, well that works too ... but, that was just a happy accident.) But, I digress ...

Mamma Bear (played exquisitely by Gina Torres) held a car in the air over her head and was poised to throw it at the heroes! (When I say "played exquisitely" I mean that I told my fellow gamers as I described Mamma Bear, "Imagine that she's being played by Gina Torres if this were a movie." And well, in my imagination she did an "exquisite" job.) But, I digress ...

Mamma Bear did indeed throw the car smashing it into the side of the diner. Debris flew everywhere, but thanks to a critical success on her defense roll, one player not only avoided injury for herself but also was able to protect any innocent bystanders from harm!

Now the fight is on! Mamma Bear, the super strong black beauty in one arena, and her less super, but just as evil pistol toting hubby J.J. in the other. J.J. went down quickly, but Momma took a bit longer to defeat. The Heroes did win the day and were personally congratulated by Guy Fieri (of Diners, Drive-Ins, and Dives) himself! The celebrity foodie there to do a follow-up on his piece on the "Diner on the Route" (now we know why it really closed!) Guy gave each of the heroes his business card with a number and time written on the back. Call me, he urged!

The players had a bit of down time, but ultimately came together out of curiosity and made the call. The players disappeared from their calling location to reappear in the called location, the now abandoned, Justice League Satellite! It seems that Guy Fieri's true identity is one Ralph Dibny AKA the Elongated Man. EM had been struggling with an image problem. And with other high profile stretcher's stealing his thunder he decided to retire. He gave up his public ID as Ralph Dibny and went to work for the Food Network.

Now ... according to Guy (Ralph), the Food Network is looking to get into the Superhero biz and wants him to help promote a new supers team. They even offer a salary of $1000 a week. All they gotta do is thwart the occasional super villain and maybe get caught on TV doing it. Why not support the Food Network? The Heroes don't have anything against food do they?

The players agree to this arrangement for now. Guy's connection with the abandoned JLA satellite gives them access to information on criminals and instant travel access all over the globe. (The JLA have moved to a new headquarters (The Hall of Justice) in Washington DC. No sooner has the new team agreed to this remarkable arrangement, then a bank heist in New York sets off an alarm drawing their immediate attention!

The supervillains Lightning Serpent and Sparrow Hawk (both created by me by the way when I was in 4th grade!) are hold up in the bank and have taken hostages! Time to beam down to action!!

So the rest of the playtest went really well. The combat between Mamma Bear and the PC's was exciting the flow was quick and everything felt easy. New mechanics for difficulty levels and critical success all came into play effortlessly and the rules continue to stay out of the way of the role-play, perhaps more for Hero DxD, than they did even with Five by Five.

My new superhero game rocks! I have another play-test scheduled here at Watchtower next week on Saturday, 12/13. I am really looking forward to it!